Climate “Scientist” Goes Wild and Glues Himself to Bank

Climate “Scientist” Goes Wild and Glues Himself to Bank!

[Editor’s Note: Climate “scientist” Peter Kalmus, part of NASA and the IPCC effort to build the case for a green eggs and scam ripoff and a socialist reset, becomes glued.]

The climate nuts hurt their cause as much or more than they help it. And their own words doom them to ridicule and irrelevance.

Enter Peter Kalmus, a climate scientist making a living at taxpayer expense. He has been a go-to voice regarding the April 6, 2022, “Scientist Rebellion” event where over 1,000 scientists in 26 countries risked arrest to “warn the world.” 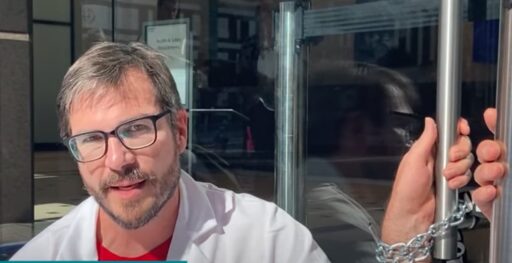 Kalmus glued himself to the entrance of Los Angeles’s Chase Bank headquarters and got arrested. The story is told here:

“The scientists of the world are being ignored and it’s got to stop,” said Peter Kalmus, a California-based father of two and NASA climate scientist. “We’re going to lose everything. We’re not joking. We’re not lying and we’re not exaggerating.”

Kalmus delivered an emotional plea at the doorway of the JP Morgan Chase building in downtown Los Angeles. He was arrested with colleagues who chained themselves to the bank’s doors. Kalmus wrote an op-ed about his experience for The Guardian [excerpted below].

“If everyone could see what I see coming,” Kalmus wrote, “society would switch into climate emergency mode and end fossil fuels in just a few years.”

Problem is that Kalmus is an outlier–a politico in science clothing. Rational, sober, open-minded scientists see his dire views as iffy–and at odds with pubic policy in a rational world. He does not understand such fundamentals as energy density and intermittency–and he seems to not want to acknowledge the case for global lukewarming and benefits of CO2 emissions.

Peter Kalmus is angry and disillusioned (the world does not believe his spiel) on social media:

“When there is no policy or regulation to speak of but ‘the market’ after a while you end up with a completely fucked up society like the US.” (April 19, 2022)

“I just really wanted everyone to know that scientists around the world are so desperate for society to treat Earth breakdown as the emergency it is that they are increasingly willing to take significant risks.” April 19, 2022

“At some point you will agree with me that Earth breakdown is such an emergency that we can’t have commercial aviation until we can do so without fossil fuels. Would be pretty great if you could agree nowish so we can get on with shifting fossil fuel culture & transforming society.” April 18, 2022

“The IPCC WG3 report was SUCH a clear warning, and because of it UN Secretary General @antonioguterres has been essentially begging for the people of the world to rebel as governments insanely expand fossil fuels – and he’s quite correct. Rebellion now is the most rational choice.” April 19, 2022

“Oh fuck it’s almost Earth day again. let me know when world leaders get their heads out of their asses and do something.” April 18, 2022

“I honestly don’t care if you recycle or not, I want you to engage in or support those who in engage in climate disobedience.” April 16, 2022

“I suspect fossil fuel leaders were surprised and amazed that their frankly evil plan worked beyond their wildest dreams. The key to their unfortunate success was this failure to report the impending climate emergency, the greatest journalistic failure in history.” April 16, 2022

“This is NOT to let the fossil fuel leaders off the hook. Far from it, they should be in prison (not climate activists!).” April 16, 2022

Here are quotations from his Guardian article

I’m a climate scientist and a desperate father. How can I plead any harder? What will it take? What can my colleagues and I do to stop this catastrophe unfolding now all around us with such excruciating clarity?

Even limiting heating to below 2°C, a level of heating that in my opinion could threaten civilization as we know it, would require emissions to peak before 2025….

Of course he is doing his glue jobs for us, not himself ….

I hate being the Cassandra. I’d rather just be with my family and do science. But I feel morally compelled to sound the alarm. By the time I switched from astrophysics into Earth science in 2012, I’d realized that facts alone were not persuading world leaders to take action….

Nothing has worked. It’s now the eleventh hour and I feel terrified for my kids, and terrified for humanity. I feel deep grief over the loss of forests and corals and diminishing biodiversity. But I’ll keep fighting as hard as I can for this Earth, no matter how bad it gets, because it can always get worse. And it will continue to get worse until we end the fossil fuel industry and the exponential quest for ever more profit at the expense of everything else.

What can the rational say to one Peter Kalmus?

And finally, avoid hunger strikes and self-immolation. Don’t pull a David Buckel, please. And if your civil disobedience turns into a felony conviction, please leave the taxpayer dole in the best interest for us taxpayers.