CO2 Emission Reduction Has A Downside and It’s Huge!

CO2 Emission Reduction Has A Downside and It’s Huge!

[Editor’s Note: CO2 emission reduction isn’t cost-free or harmless. Rather, it has downside implications for food production, health and the environment. It is a great risk.]

Over the course of my career I have often been asked by concerned persons if there is any downside to implementing CO2 emission reduction policies on the off-chance that model projections of future climate change might be right. These well-meaning individuals do not necessarily believe or buy into the mantra of global warming extremism, they simply seek some sort of an insurance policy to defuse fears accumulated from the constant flow of projections of a forthcoming climate apocalypse.

And, so it is when legislation like the recent U.S. Inflation Reduction Act of 2022 comes up for debate, they stay silent or simply go along with the crowd, assuming or wanting to believe that such legislation is just the insurance policy they have hoped for.

But it isn’t. Nor does it represent the end to efforts to curb CO2 emissions, for it has been openly stated since the days of the Obama Administration that the end game of climate alarmism has little to do with saving or improving the environment, but everything to do with legislating fossil fuel use into oblivion. And that objective brings some rather serious repercussions upon society.

Consider, for example, the fact that fossil fuels (coal, gas and oil) presently account for approximately 84% of all global energy production and 63% of global electricity production. By legislating these resources into oblivion without a sufficient supply of alternative resources to replace them, such policies are creating scarcity in the market, which scarcity will undoubtedly result in higher energy prices. Consequently, any commodity or product downstream of energy production will be impacted by higher costs—ergo we have at least one significant downside to enacting CO2 emission reduction schemes.

Nowhere is this more evident than in the agricultural sector of the economy, which relies on low-cost energy to produce food and other products necessary to sustaining life on the planet. As the costs to produce agricultural products increase, those costs are passed on to the consumer, thereby reducing disposable household income, which reduction also disproportionately burdens the poor.

In recent months we have all experienced the sour taste of this unfortunate chain of events to one degree or another as we have dealt with rising gas prices that helped contribute to inflated food prices. Yet that experience represents only the tip of the iceberg compared to what is coming if CO2 emission reduction polices are not reversed and altogether abandoned.

In this regard, Figure 1a shows the results of a peer-reviewed study by Frank et al., who examined the impact of a fairly strict CO2 emission reduction policy on the agricultural sector. What they found is that a $150 per ton of CO2-equivalent (CO2e) tax significantly increased the price of important food commodities. Averaged for the world as a whole, for example, such a tax would increase the price of milk by approximately 49 percent, the price of rice by 67 percent and the price of beef by a whopping 108 percent.

As a result of the researchers’ findings, they estimate the global food price index would rise by nearly 40 percent in response to a carbon tax of this magnitude (see Figure 1b). Larger increases from 60 to 100 percent are projected for Oceania, South East Asia, Sub-Saharan Africa, South Asia and Latin America. Sadly, these regions harbor the least efficient agricultural production systems and their inhabitants will therefore bear a disproportionate burden of the globally-averaged projected increase in the food price index. But higher food prices are not the only negative outcome tied to this scenario.

Figure 2 depicts the relationship between greenhouse gas mitigation targets and global average calorie consumption projected for the year 2050. As seen there, as one follows the blue line to the right, increasingly ambitious efforts to stabilize the climate by means of a carbon tax (or any other CO2 emission reduction scheme for that matter) result in greater reductions in daily dietary energy for the average human. Using the IPCC’s Representative Concentration Pathway (or RCP) scenario that limits future projected warming to 1.5°C, for example, we find that a $190 per ton of CO2 equivalent tax reduces daily caloric intake by 285 kilocalories per capita per day, amounting to a 9 percent caloric decline. At first glance, this decrease may not appear to be all that important, but it translates into a 300 million person increase in the global number of chronically undernourished persons, which represents a whopping 150% increase above those presently occupying this category! 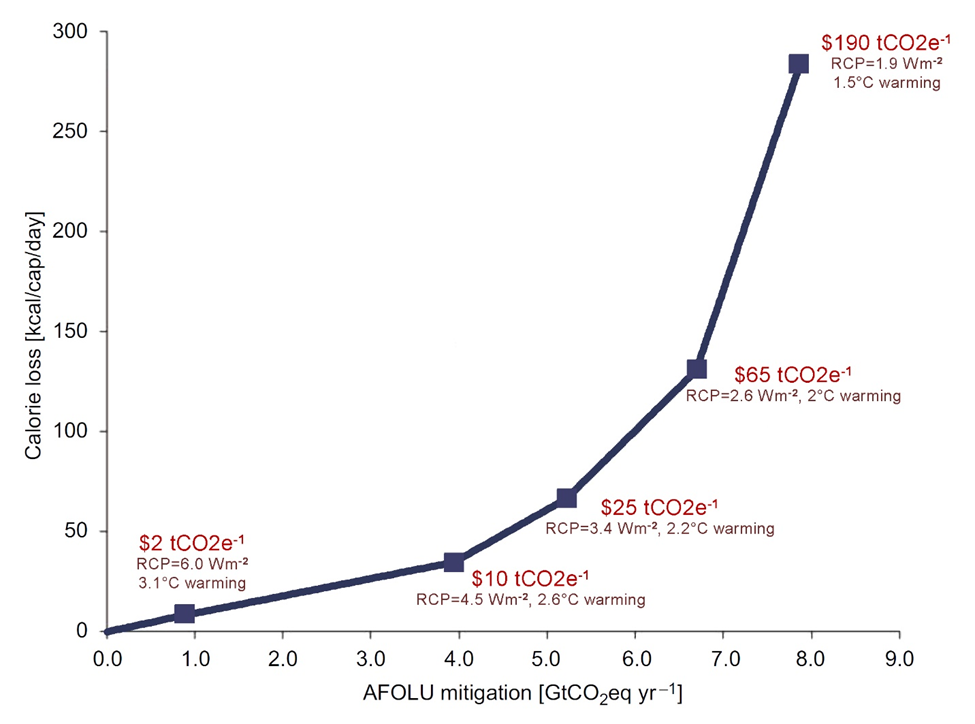 Figure 2. Global annual mitigation potential for the agriculture, forestry, and other land use sector (AFOLU) in GtCO2eq yr-1 in 2050 vs. global average loss in daily dietary energy (kcal per capita per day) consumption, compared to a baseline scenario without mitigation efforts. The blue line represents policies where all countries participate to achieve increasingly ambitious climate stabilization targets. Text adjacent to the blue squares indicates the carbon price (tax) associated in achieving climate stabilization for a given representative concentration pathway (RCP) and its associated global temperature reduction in 2050. Adapted from Frank et al. (2017).

There is a clear downside to pricing CO2 emissions. It is not only detrimental throughout multiple sectors of the economy, but at increasingly ambitious levels it leads to trade-offs with food security and human health. Unfortunately, it will probably take a much deeper trip down the CO2 emission reduction rabbit hole than we are presently witnessing before society feels the true pain of these schemes and wises up to stop it.

Reposted from Master Resource with permission