[Editor’s Note: Europe pursued anti-fracking green energy fantasies that made it vulnerable to Russia and without its own natural gas at low prices also made coal king again.]

Coal generation worldwide is expected to increase to a new record in 2022, driven by robust coal power growth in India and the European Union and by increases in China. In Europe, high natural gas prices led to fuel switching to coal in electricity generation. However, both natural gas and coal generation increased due to lower hydroelectric and nuclear power production, low wind speeds in some European countries and insufficient growth in wind and solar power.

Many thought global coal generation would peak in 2018, but it has been increasing each year since its decline in 2019. Despite spending trillions of dollars subsidizing renewable energy sources such as wind and solar power, the world is nevertheless burning record amounts of coal to keep the lights on and to generate warmth.

While most of the world is increasing its coal generation, the United States continues with its coal decline, according to the International Energy Agency (IEA). In the United States, coal generation peaked in 2007 and started its decline during the Obama Administration as coal plants began to retire due to onerous regulations and low cost natural gas, which made coal uncompetitive. U.S. coal generation in 2021 was 45 percent of its 2007 peak level. IEA expects coal use in the United States to maintain its downward trajectory, despite its reserves which are the largest in the world.

In 2022, fossil fuel prices rose substantially, with natural gas prices increasing the most, prompting a wave of fuel switching away from gas and pushing up demand for more price-competitive alternatives, including coal.  Despite coal prices increasing, coal demand is expected to grow by 1.2 percent, reaching an all-time high and surpassing 8 billion metric tons for a new record.

Coal used in electricity generation is expected to increase by just over 2 percent in 2022, while coal consumption by industry is expected to decline by over 1 percent, primarily driven by falling iron and steel production due to the economic crisis arising from large energy price increases. Russia’s invasion of Ukraine sharply altered the dynamics of coal trade, price levels, and supply and demand patterns. IEA expects global coal demand to plateau around the 2022 level of 8 billion metric tons through 2025. 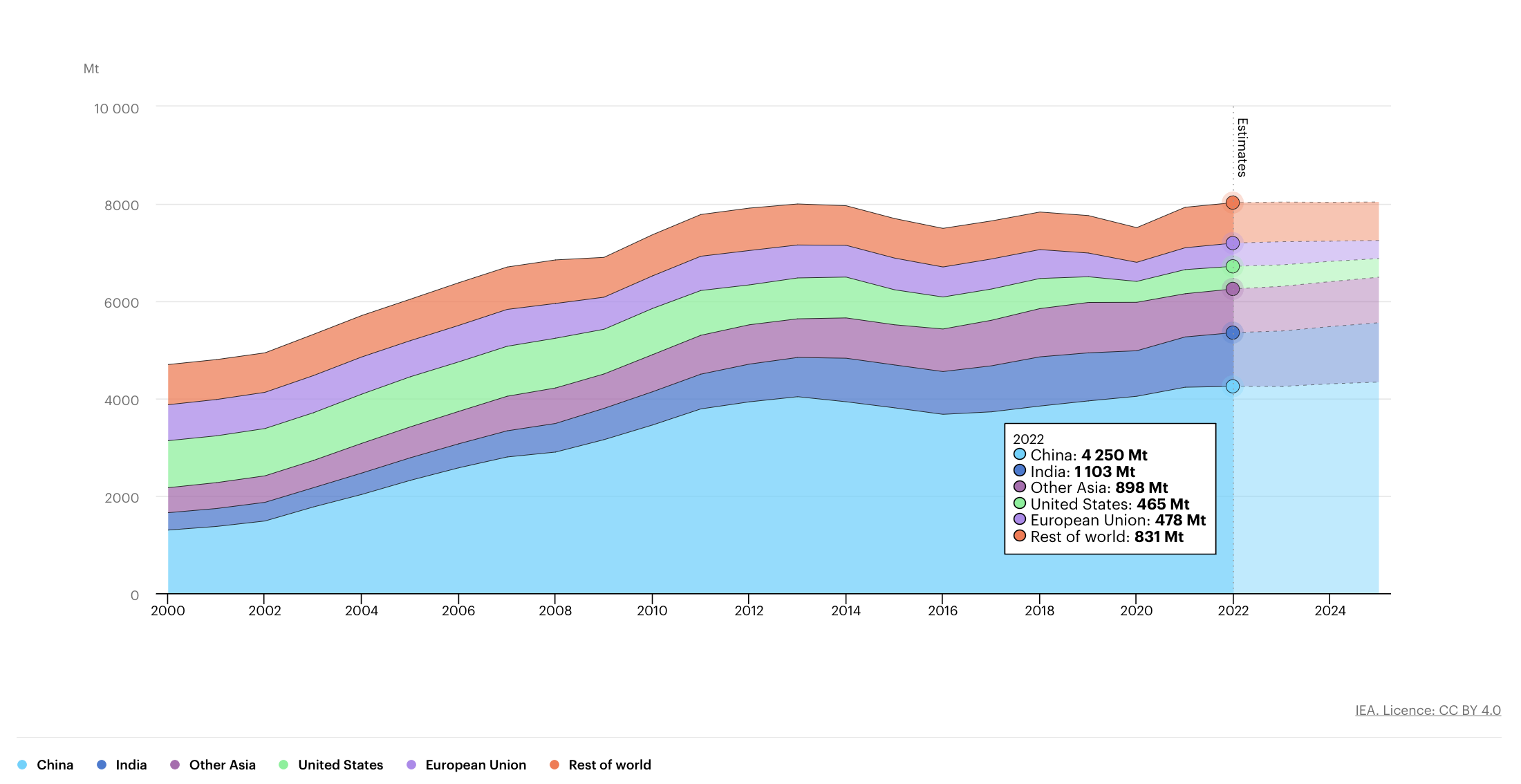 China accounts for the majority of global coal consumption (53 percent). Droughts and heat waves this summer increased the demand for air conditioning and hence coal generation in China. In August, coal power generation in China increased by around 15 percent year-on-year to over 500 terawatt-hours.

In India, coal consumption has doubled since 2007 at an annual growth rate of 6 percent, and it is expected to continue to be the major growth area of global coal demand.

In Europe, lower hydroelectric generation due to weather conditions and technical problems in French nuclear power plants put additional strains on the European electricity system along with reduced supplies of natural gas from Russia. In response, some European countries increased their coal generation and extended the lifetimes of nuclear plants.

Some coal plants that had closed down or been left in reserve were brought back on-line. Germany, for example, is operating with 10 gigawatts of coal capacity, increasing coal power generation in the European Union, which is expected to remain at higher levels for some time. IEA expects coal generation and demand in the European Union to return to a downward trajectory in 2024 in its forecast, but remain high in 2023.

China and India, besides being the world’s largest coal consumers, are also the world’s largest coal producers and the world’s top two coal importers. In response to price increases, supply shortages and growing demand, China and India increased domestic coal production after the summer of 2021. In March 2022, Chinese production reached a new monthly high, which is expected to increase to a new annual record, with expected growth of 8 percent for the year, reducing the need for imports and replenishing stocks.

Global coal is not going away despite what environmentalists and politicians wish and display through their “green” policies. In fact, the renewables they are forcing onto electric grids worldwide are generally supplementing existing sources. China and India will remain the largest coal producers and consumers because the United States, with its largest in the world coal reserves, will be inundated with “green” policies to cause coal’s demise under Biden’s “all of government” approach to climate change, which he insists is “an existential threat.”

China is building coal plants around the world, with the latest in Afghanistan where they will be obtaining future riches from the country’s critical mineral supply needed for renewable technologies, electric vehicle batteries and weapons production. China dominates the supply chain of critical minerals through its worldwide investments and its processing capabilities. Clearly, while Europe got caught relying on Russian energy, Western countries will soon be dependent on another autocratic country—China.