COP-27, Reparations Notwithstanding, Is Simply Anti-African

COP-27, Reparations Notwithstanding, Is Simply Anti-African

[Editor’s Note: COP-27 is offering phony suggestions of climate reparations but it’s a head fake as elitists seek to prevent Africa from developing fossil fuels and a future.]

As Americans give thanks this week for our many blessings, let us recall the Pilgrims’ and Native Americans’ primitive agricultural knowledge and technologies, the hunger and disease that were constants in their lives – and how so many around the world are not much better off today.

Much of Africa still lives on the edge, with well over 600 million people not even having electricity. Many parts of India, Asia and Latin America also face serious energy and food deprivation. 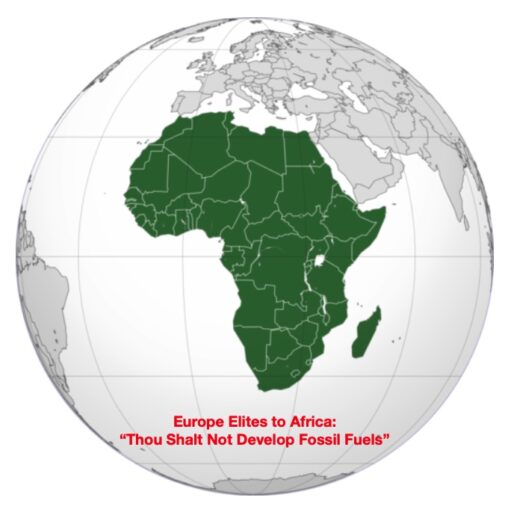 Incredibly, so does Europe. “German industry stares into the Net Zero abyss,” “Europe’s energy crisis may get even worse next year,” “Even Germany’s wind industry is sliding into crisis,” “Millions face poverty and destitution in Green Britain, as Brits pay highest electricity bills in world,” headlines warn.

Banning Russian gas imports amid Putin’s war on Ukraine plays a role and is frequently scapegoated. But the primary cause is Europe’s love affair with intermittent wind and solar, and hate-fest for fossil fuels and nuclear, amid frigid winter realities that have caused Germany to obliterate ancient villages and recent-vintage wind farms to mine lignite coal beneath them.

Closer to home, New England and New York also face a cold, dark winter, because they too have voted against drilling, fracking, pipelines, coal and nuclear power – and now demand more oil and gas from the same companies that they and President Biden want to drive into oblivion.

However, the greatest hypocrisy of all was on full-throated display at the COP-27 climate circus in Egypt November 6-18 – where attendees kept asking whether Africa should be allowed to exploit its oil, natural gas and coal reserves to improve living standards, feed families and save lives!

Al Gore preached that fossil fuel investments should be terminated worldwide, including in Africa. UN Secretary General António Guterres absurdly asserted that “New funding for fossil fuel exploration and production is delusional” and will only “feed the scourge of war, pollution and climate catastrophe” (the manmade cataclysms found in computer models and COP-27 rants, though not in the Real World).

At the COP-27 climate gabfest in Sham-El-Sheikhdown, Egypt, John Kerry said African nations shouldn’t rely on natural gas to generate electricity and modernize. (Kerry has five houses, a yacht and private jet – but that’s OK because they’re in his wife’s name, and he merely “makes use of them.”)

Even worse, it’s not just energy these arrogant eco-totalitarians want to obstruct in Africa and other developing regions. It’s also modern fertilizers — indeed, all aspects of modern agriculture – everything that can actually help farmers feed hungry people and make enough money to build a home or barn, send their children to school, and buy tractors and other equipment.

They don’t even want Africa producing natural gas and using it to make nitrogen fertilizer, which dramatically boosts crop yields and is absolutely essential if the world is to feed eight billion people – especially without turning millions more acres of wildlife habitat into marginal croplands.

Poor countries are no long going to tolerate this outrageous, intolerable, racist neo-colonialism. Nor should they, especially when they realize now-rich countries are on the verge of de-industrialization and bankruptcy – and have neither the intention nor ability to shell out billions, much less trillions, of dollars in annual “reparation, loss and damage” payments for alleged impacts from manmade climate change.

So when the UN, now-rich countries and eco-pressure groups tell them there’ll be no financing for fossil fuels and modern agriculture – only for wind and solar energy, organic farming and “AgroEcology” – poor countries should just tell these purveyors of poverty, hunger, disease and death to buzz off. That would leave poor countries largely on their own.

But they have numerous advantages that their predecessors lacked: access to the incredible energy, agricultural, industrial, economic, medical, communication and other advances of recent centuries, especially during the fossil-fueled industrial era.

They simply need to chart their own destinies and utilize these advances. Every project they undertake will generate new wealth, innovation and self-confidence to undertake subsequent projects.

I’ve written about these callous eco-imperialists – these financiers and merchants of death – many times (here, here, here and here, for example).

Unfortunately, they never repent, never revise their lethal attitudes and policies. The global following they enjoy underscores how the ill-informed but well-intended really are led around by the well-informed but ill-intended – on climate, energy, agriculture and human rights.

Instead, they demand “food sovereignty” – the “right” to “culturally appropriate” food produced through “ecologically sound and sustainable methods, in accord with AgroEcology policies – the kind that brought hunger and chaos to Sri Lanka.

They even vilify Golden Rice, which could end Vitamin A Deficiency, blindness and death among malnourished children.

Could the insanity and hypocrisy get any worse? Sadly – yes.

European leaders have been pleading with African nations to launch oil, gas and coal projects – for shipment to Europe. In their next breath, the EU Commission says supporting nitrogen fertilizer production in Africa would “clash” with EU climate goals.

The International Energy Agency worries that half of Sub-Saharan Africa’s population has no access to electricity. In its next breath, the IEA says stopping planetary overheating doesn’t allow for more African petroleum production.

Even more colonialist, Time magazine promotes the notion that “humans eating insects could help save the planet.” The New York Times extolls a new Julia Child “Joy of Cooking (Insects).” And a group of “renowned” African and European “ecology and nutrition experts” says climate change and other considerations make Africa “the perfect laboratory” for testing new ways to feed humanity – like turning lake flies from the Lake Victoria region into “crackers, muffins, meat loaves and sausages.”

COP-27 (or FLOP-27) claims to have reached another “historic milestone” in saving Planet Earth! But it’s all driven by unfounded hysteria about manmade climate cataclysms. Let’s all take a deep breath.

We certainly face climate fluctuations and extreme weather events – but no worse than in the past, and with no replicable, convincing evidence that manmade emissions have replaced natural forces. More importantly, we have far greater wealth, far more knowledge, far better technologies and resources than in the past – to help us adapt to climate changes, survive extreme weather events and rebuild afterward.

That’s infinitely preferable to blanketing the Earth with wind turbines, solar panels, battery modules, transmission lines, mines and factories to build the things – and processing plants to make bug burgers and other delicacies, in time for climate luminaries to enjoy them at COP-28.

Can’t we just be calm and rational (and thus colonialist?) just this once? Just asking.