Corporatism Is the Disease and Truth and Speech Are the Cures

Corporatism Is the Disease and Truth and Speech Are the Cures

Corporatism, the merger of business and government, is rampant today and impacts every aspect of our daily lives. It will only be beaten with truth and speech.

Author Joel Klotkin truly gets it. Writing in his on-line journal “The New Geography” in 2021, he observed this:

The concentration of power in few hands, whether in the Chinese or American variant, has its true antecedents not in Marxism, as is often claimed, but in European fascism. Benito Mussolini, who viewed himself as a “revolutionary” transforming society, not a traditionalist, wanted the state to become “the moving center of economic life.”

…Not only did Mussolini rely heavily on large landowners and companies for his seizure of power in the run-up to the March on Rome. Once the fascists were in power, Confindustria, the leading organization of Italian industrialists, was glad to see the end of class-based chaos and welcomed the state’s infrastructure surge.

What Klotkin describes is the birth of modern corporatism; the merger of business of government to exploit the citizenry. We are in the midst of massive solar flare sized burst of it again right now throughout the world and the only cure is free speech and much more of it.

Klotkin further notes this corporatism goes by a host of other names today, although all are but minor variations of the same thing. Each of the names, in fact, aim to sell a falsehood; that the new corporatism is but an improvement, an enhancement or a blossoming of traditional capitalism. “Stakeholder capitalism” is probably the most dishonest.  “Public-private partnership” is a soft version.

Then, there is “Build Back Better,” “The Great Reset” and the one new brand that embraces all, that being the detestable ESG, which stands for the amorphous “Environmental, Social and Governance.” ESG, like “Sustainability” is designed to mean whatever one wants to hear, of course, which makes it particularly useful for corporatists and other crooks.

What all these amount to is simply this: an excuse to grift off ratepayers and taxpayers and enrich the elites behind these business and government convergence schemes.

There is, of course, always the temptation to imagine these schemes are organic. This attributable to the useful idiots who buy into the environmental branding behind the newspeak involved. The radical protests now taking place in Germany are led by those of whom I speak.

Patently absurd scenes took place during and after hundreds of police began clearing climate change protesters out of an abandoned village on Wednesday in a showdown over the expansion of an opencast lignite mine that has highlighted tensions around Germany’s climate policy during the country’s ongoing energy crisis.

The protesters formed human chains, made a makeshift barricade out of old containers and chanted “we are here, we are loud, because you are stealing our future” as dumbounded police in helmets moved in. Some threw rocks, bottles and pyrotechnics although nobody is reported to have superglued themselves to something else. According to Reuters, police also reported protesters were lobbing petrol bombs.

The demonstrators, wearing masks, balaclavas or biosuits (and all probably in their mid teens, with purple hair and extremely bored) have been protesting against the Garzweiler mine, run by energy firm RWE in the village of Luetzerath in the brown-coal district of the western state of North Rhine-Westphalia.

Yes, bored, spoiled and blithely oblivious as to how they were, and continue to be, abused by the corporatism of the failed Energiewende that led to this situation. These true believers opposed fracking and got Russian blackmail and a dirty brown coal mine for their efforts. Rest assured, though, that those who made billions off solar and wind subsidies are just fine and only want to continue the scam as long as possible.

Perpetuating the scam is, indeed, the motivation for ESG and there is, for this reason, big money behind all the corporatism, as my good friend, Jason Spiess, from ESG University explains in this substack post:

After a decade-long spike with the GOP’s cozy relationship with public-private partnerships and nonprofits, the final result may be the end of American values and way of life.

Every community seems to have one these days. In some communities it’s called “TED Talks,” others it’s “One Million Cups,” while others are trying to repurpose another’s idea into their own brand by using someone else’s donation, dollar or economic development grant.

In short, many of the government-funded speaking series, like TED Talks, direct dollars through a nonprofit or quasi-government entity that generally advance political agendas, special interests and personal vanity…

Would these pep-rally themed events survive without government money and their endorsement? The combination of those two actions from the government is extremely important for the success of these events to compete in the marketplace.

TED began as a four-day conference in 1984 that was funded mainly through donations. Since then, TED has grown significantly, with its talks now being viewed by millions of people around the world.

In addition, TED has established several initiatives and programs that provide individuals with the opportunity to develop their ideas and share them with the world.

TED has received significant amounts of economic grants, government subsidies, and non-profit gifts. According to an article published by the New York Times, TED has received more than $200 million in donations since its founding.

TED has also received generous donations from corporations, foundations, and individuals, such as a $25 million donation from the Bill and Melinda Gates Foundation.

In addition to these donations, TED has also received numerous awards, such as the Academy Award for Science and Technology, and the TED Prize, which is awarded to individuals who have “outstanding ideas to change the world”. These awards are accompanied by monetary prizes, which have amounted to over $1 million in total.

Finally, TED has also received a considerable amount of funding from other non-profit organizations.

For example, the Knight Foundation has provided TED with over $4 million in grants to support its conferences and events.

Non-profit foundations have become the vehicles by which elite impose their agenda and obscure their roles. NGOs are the new Swiss banks and Cayman Islands of the ruling class where they employ their money secretly and tax-free and make their non-legislative but still controlling sausage. ESG is the result; self-serving edicts delivered not directly by government but, rather, through an unholy alliance of business and government.

It’s all but a repackaged form of totalitarianism; this time with the rulers hidden behind a facade of charity, good works and high morality, the most effective lies that can be told. The remedy, of course, is speaking truth to power, as it always has been. This time, though, it’s been made more difficult because the liars have gone after speech itself and demand only lies be told. The last seven years have been years of abundance for lies. We’ve learned the FBI is a lying machine, both major political parties are led by liars, our major media and big tech giants have coordinated lies with government, big pharma has lied like no one before and every major institution has seemingly adopted the lie as their secret sauce.

So, what to do? The answer is to be found in refusing to live by lies, as a famous man once said, and in, once again, communicating by what Mark Steyn referred to as the “last rusting copier in the woods.” Except that copiers, as we know them today, require electricity, which elites are determined to make us use so they can turn it off and squelch our voices when need be. We may have to do what the Belgian resistance did in World War II with these sorts of machines to produce underground newsletters and pamphlets: 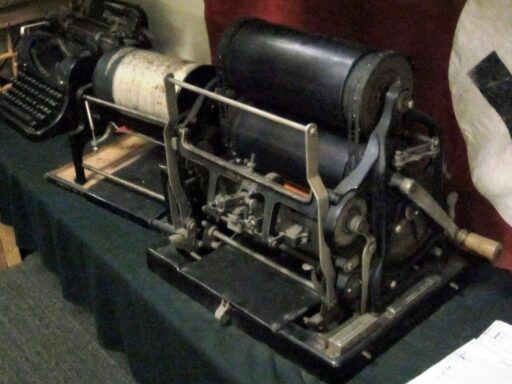 And, if that doesn’t work? Well, there are always notes penned onto tiny bits of napkin that can be inserted in cigar tubes. Truth will find a way out and that is the one thing our elites cannot control, though they have forever tried. Corporatism is just another variant of the pandemic that has always been with us; the one based on pride and envy and the evil unquenchable desire to control the lives of others so as to improve our own. We must  fight it, wherever it pops up, including within our own souls, and reject this convergence of business and government that threatens to smother all our freedoms.