Corporatism Is the Stalk, Money the Root of Climate Crisis

Corporatism is little understood but is the mechanism through which money today plays its role as the root of all evil, especially when it comes to climate.

Appearing before a legislative committee a few years back, I used the word corporatism in answer to a question. I couldn’t help noticing no one on the committee seemed to know what I was talking about. That was a good lesson for me, course. Never assume your listener will grasp but the simplest of explanations. I suspect those opposed to my pro-gas message that day were wondering why I was suddenly adopting their anti-business attitude. Likewise, those who otherwise agreed with me were probably perplexed that I appeared to be against capitalism. Both were wrong, of course. Corporatism is the precise opposite of capitalism and, in fact, is busily destroying it these days and no more so than with respect to the phony non-existent ‘climate crisis.’

If you imagine the ‘climate crisis’ is anything but phony, you haven’t read Steven Koonin’s “Unsettled,” a dismissal of the crisis part by an Obama Undersecretary for Science. Corporatism, though, as reflected in the agenda of the elitists and globalists who are the World Economic Forum demands it be a crisis. These folks, who fly into Davos on some of the world’s biggest CO2 emitters to talk climate, need the crisis to launch the next big thing in their eyes. That would be the next great opportunity to score and make trillions of dollars. Only this time they have no intention of making it the old fashioned way. Rather, they hope to do so by sucking on the public teat. That’s what corporatism is. At least that’s my definition.

Corporatism is more elegantly described at Wordnik as an:

Economic system in which power is exercised through large organizations (businesses, trade unions, their associated lobbying efforts, etc.) working in concert or conflict with each other; usually with the goal of influencing or subsuming the direction of the state and generally only to benefit their own socioeconomic agendas at the expense of the will of the people, and to the detriment of the common good.

That comes close I guess but doesn’t hit the bullseye. It certainly covers Amazon, which now has our Postal Service delivering its packages on Sundays even, while the mailman feels free to skip my deliveries two days out of five on occasion because it supposedly doesn’t have enough help. It also covers Facebook, Google, Twitter and others being used as censors to shut down free speech that is against the government and get Section 230 protection from being sued so they can promote those enterprises in which they are invested, whether business or political. In Google’s case that included the Ivanpah fiasco, which we, the taxpayers, guarantied as green energy and still depends on natural gas. That gets a lot closer to my definition.

Then, there is Elon Musk, of course. He’s quite an interesting case because he does have a neat idea or two when it comes to space and he called out the government on the WuFlu socialist initiative, but what a hustler. The man has taken billions and billions from taxpayers to produce government subsidized everything, That’s not capitalism, not even close. Admire his personality if you wish, but he’s an old fashioned Dr. Good selling concoctions packaged in government bottles, distributed by government wagons and underwritten by government contracts. He’s the modern version of the lovable rogue, one or two which we can tolerate, but we’re far beyond that now.

The U.S. Chamber of Commerce is nothing but corporatists looking to grab sweetheart government deals at every opportunity while pushing mass illegal migration into this country to get cheap labor for themselves in league with Democrats who want cheap votes. It is pure undiluted corporatism and we another example with the non-existent climate crisis. I wrote about this recently as to green grifting and the evidence mounts with this (emphasis added):

Bluejay, the AIM and FSE listed, and OCTQB (ticker: BLLYF) traded, exploration and development company with projects in Greenland and Finland, has signed a joint venture agreement (‘JV’ or the ‘Agreement’) with KoBold Metals (‘KoBold’), at the Company’s Disko-Nuussuaq nickel, copper, cobalt, platinum magmatic massive sulphide project (‘Disko’ or the ‘Disko Project’) in Central West Greenland…

Read the whole thing, but notice the involvement of Jeff Bezos, the guy who made an immense fortune incredibly bigger by virtue of the WuFlu lockdowns his Washington Post advocated and hyped. Notice, too, Bill Gates, the vaccination investment king who has found another way to make money via the government, evolving from a capitalist to a World Economic Forum corporatist.

Finally, note the itty-bitty reference of Bluejay to being a partner of regulators. This is the mouse that roars corporatism and it demonstrates precisely what is going on with the climate crisis that doesn’t exist but is necessary to make the trillions and you have the full picture. 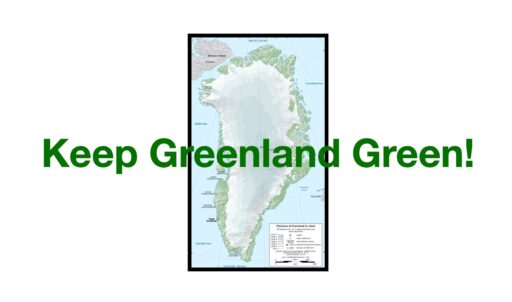 It becomes a more entertaining picture when you realize they’re talking about tearing Greenland to pieces to make subsidized EVs for upper class Americans and Europeans, the same Greenland they were worried would be destroyed by melting glaciers and the same Greenlanders who are vulnerable in every way. Where are the fake environmental justice warriors on this one? Oh, I forgot, they work for the corporatists who fly into Davos on their private jets, financed through their foundations, tax-exempt foundations, of course. This is corporatism. Lesson over for today.