Except for your volunteer fire company, church or Rotary Club, corruption has infected every aspect of our civil society. Are we at the tipping point? Have the corruptocrats gone too far?

A few days ago, I suggested the vanity of Great Resetter elitists may be their undoing. Now, there is further evidence, direct from the mouth of one of the apparent corruptocrats himself. I’m talking about Sam Bankman-Fried (SBF), of course, who has taken every leftist virtue-signaling trust-funder for a ride in his shiny green machine. 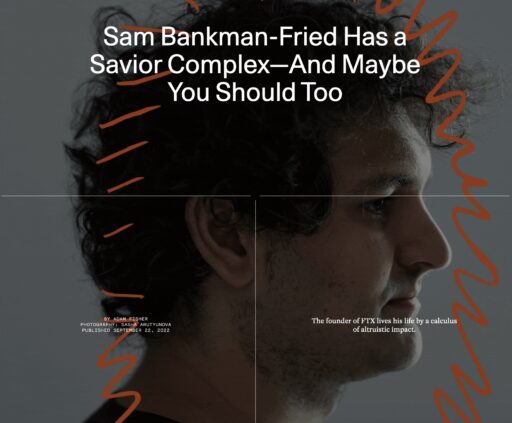 Yes, SBF, who has his own vanity issues, which is probably why he so understood and was able to manipulate others with the same problem. Grasping just how good he was at doing that only requires visit to a website, now apparently gone, for an outfit called Sequoia Capital. That website is still available on the Wayback Machine archive, and here is a little background on the firm (emphasis added):

In 1972, when Don Valentine founded Sequoia Capital, the term “Silicon Valley” was less than two years old. A veteran of the nascent semiconductor industry, Don had helped power the growth of personal computing and networking. With Sequoia’s first $3 million fund, he backed both Apple and video game pioneer Atari. That Don chose “Sequoia,” a tree that lives thousands of years, rather than naming the firm after himself surprises no one who knew him. It was his humility and commitment to empowering the next generation that has enabled our team to stand the test of time. We’ve partnered with each generation of legendary companies since then, from Cisco to Google to Instagram to Airbnb and Stripe, and beyond.

From the start, we have ensured that when our founders win, so do great causes. Sequoia invests primarily on behalf of nonprofits and schools, with organizations such as the Ford Foundation and Boston Children’s Hospital forming most of our limited partner base. Working for them gives us a greater sense of responsibility and purpose.

This “holier than thou” message was designed to appeal to younger trendier elites. Sequoia identifies the companies who it has helped and many are also represented as founders of the outfit. The companies include such slick firms as Door-Dash, Nubank, Zoom, Apple, Airbnb, Square and Instagram. It also included FTX, which is probably why the website is now located in the internet archives, and here is what it said about SBF’s enterprise:

FTX.COM is a cryptocurrency exchange built by traders, for traders. It offers innovative products including industry-leading derivatives, options and volatility products, tokenized stocks, prediction markets, leveraged tokens and an OTC desk. FTX.COM strives to be an intuitive yet powerful platform for all kinds of users. In less than two years, FTX.COM has become one of the world’s most respected cryptocurrency exchanges.

It’s an article on the archived website from only two months ago, though, that tells just how vulnerable Sequoia was to SBF’s charms. Fittingly enough, the obsequious title was “Sam Bankman-Fried Has a Savior Complex—And Maybe You Should Too.” The sub-title, “the founder of FTX lives his life by a calculus of altruistic impact,” was equally bad; a case of what my friends tend to refer to as blowing sunshine up where the sun doesn’t shine on the subject of “effective altruism” or EA.:

Not long before interning at Jane Street, SBF had a meeting with Will MacAskill, a young Oxford-educated philosopher who was then just completing his PhD. Over lunch at the Au Bon Pain outside Harvard Square, MacAskill laid out the principles of effective altruism (EA). The math, MacAskill argued, means that if one’s goal is to optimize one’s life for doing good, often most good can be done by choosing to make the most money possible—in order to give it all away. “Earn to give,” urged MacAskill…

A woman who helps run marketing for FTX (and who prefers to be anonymous), briefs me on the Crypto Bahamas event that took place the previous month. Tony Blair and Bill Clinton showed up, as did Michael Lewis, Katy Perry and Orlando Bloom. Her mission is to try to broaden the brand’s appeal. “When I first joined, we had endorsement deals with Tom Brady, Steph Curry, Major League Baseball—it was like a frat house,” she says. “That’s why we signed the Naomi Osaka deal…”

“But that doesn’t mean we can’t also be giving during that time,” he continues. “And we are starting to scale that up.”

This strikes me as typical SBF understatement. The scale of his giving, even now, before he has really started to divest, is massive. Alameda Research, the company that generated the FTX grubstake, still exists, and its purpose seems to be to generate profits—on the order of $100 million a year today, but potentially up to a billion—that can be stuffed into the brand-new FTX Foundation. Similarly, even now, 1 percent of net FTX fees are donated to that same foundation, and FTX handles nearly $5 billion dollars’ worth of trades per day. The foundation, in turn, gives to a diversified group of EA-approved charities…

And, indeed, SBF puts his money where his mouth is. SBF is personally backing a slew of so-called AI alignment nonprofits and public-benefit corporations including Anthropic and Conjecture. He’s also the big money behind a new nonprofit called Guarding Against Pandemics, which, not coincidentally, is run by his brother Gabe. And SBF was the second-largest donor—behind only Mike Bloomberg—for Biden’s successful attempt to dethrone Trump…

After my interview with SBF, I was convinced: I was talking to a future trillionaire. Whatever mojo he worked on the partners at Sequoia—who fell for him after one Zoom—had worked on me, too. For me, it was simply a gut feeling. I’ve been talking to founders and doing deep dives into technology companies for decades. It’s been my entire professional life as a writer. And because of that experience, there must be a pattern-matching algorithm churning away somewhere in my subconscious. I don’t know how I know, I just do. SBF is a winner.

But that wasn’t even the main thing. There was something else I felt: something in my heart, not just my gut. After sitting ten feet from him for most of the week, studying him in the human musk of the startup grind and chatting in between beanbag naps, I couldn’t shake the feeling that this guy is actually as selfless as he claims to be.

Selfless? Well, now we know it wasn’t so selfless after all. It was corruption, corruption and still more corruption by the looks of events shortly after this ridiculous article was published. SBF, in fact, now says it was all “this dumb game we woke westerners play where say all the right shibboleths an so everyone likes us.” Yes, it appears it was all nothing but a front for corruption. And, he took advantage of fellow elitists across the board, funding Democrat campaigns, including against Kari Lake, to the tune of millions. And, climate was one of the cons:

SBF certainly worked hard on his image, setting up the FTX Climate Program, which used investors’ funds to purchase carbon offsets and fund other climate initiatives. He also bragged about how he gave most of his income to good causes, something he now admits was just a front.

Such is the fruit of elitist vanity and the nature of corporatist corruption. There’s no better explanation of what the climate scam is all about and how it works. The same goes for much of went on with the COVID lockdowns, what’s happening as big banks buy up apartments, as Bill Gates acquires farmland and as the World Economic Forum tries to engineer a social credit system based on digital currency while telling us we will own nothing and be happy. The Great Reset is scary as the devil, in fact, but the fate of FTX and SBF reassures us the utopias these outlaws are aiming to create will collapse under the weight of the massive corruption involved. Events always catch up with corruptocrats. Just ask SBF.