A federal judge in Louisiana has ruled that the environmental review of the Bayou Bridge Pipeline by the U.S. Army Corps of Engineers (ACE) was sufficient, Kallanish Energy reports.

The decision backs the federal government and Texas-based Energy Transfer, the company that developed the 163-mile crude oil pipeline that went into service in March 2019.

The suit had been filed in 2018 by the Sierra Club, the Atchafalaya Basinkeepers, the Gulf Restoration Network, the Waterkeeper Alliance and the Louisiana Crawfish Producers Association-West with representation by Earthjustice. The defendant was the U.S. Army Corps of Engineers that gave the company approval to build the pipeline without a full Environmental Impact Statement.

The Bayou Bridge Pipeline initially ran from Nederland, Texas, to Lake Charles, La. The extension runs from Lake Charles to St. James. La., and provides crude oil to refineries in the Baton Rouge area for processing.

The new pipeline, 24 inches in diameter, can move about 280,000 barrels a day and that will grow to 480,000 barrels a day. The pipeline extension crosses cross the Atchafalaya Basin, the largest river swamp in the United States. The project survived several other legal challenges in its development. 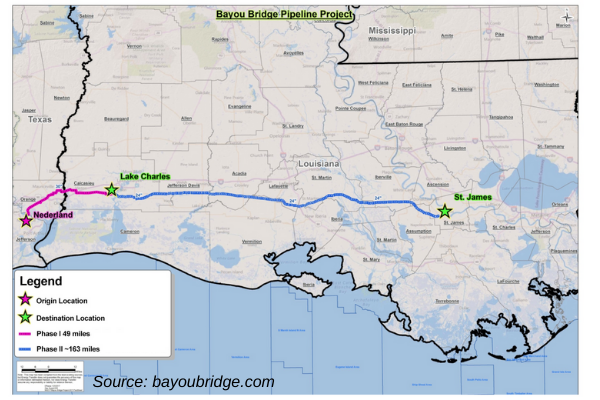