[Editor’s Note: Crude oil and natural gas are what sustain our civil society as we know it. Breezes and sunshine may be appealing but they don’t come close to what we need.]

The transition to electricity generation from breezes and sunshine has proven to be ultra-expensive for the wealthy countries of Germany, Australia, and the USA representing 6 percent of the world’s population (505 million vs 7.8 billion).  Those wealthy countries now have among the highest cost for their electricity, while the poorer developing countries, currently without the usage of the 20th century products manufactured from crude oil, are experiencing about 11,000,000 child deaths every year due to the unavailability of the fossil fuel products used in wealthy countries. 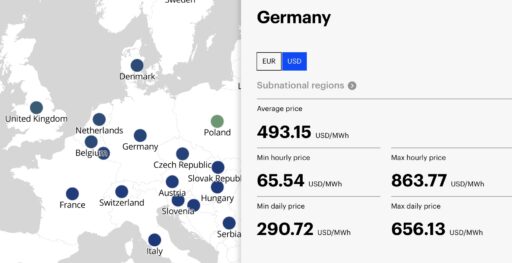 German electric prices. Average price today, post Energiewende, is $493.15 per Mhw versus $95.83 in United States. Germans are, in other words, paying more than five times as much for electricity as we are but California, New York and Joe Biden want us to imitate Germany with our own Energiewende so we can be dependent on Russia, too!

High electricity costs trickle down to everything in our daily lives, from the cost of food, lumber, and services, and ultimately to the high cost of living and housing and perpetuates the rise in homelessness and poverty.

The intermittency of weather generated electricity has resulted in the “nameplate” generating capacity of wind turbines and solar panels being a farce capacity to replace continuous uninterruptible electricity generation from coal, natural gas, and nuclear.

Those with a passion to rid the world of crude oil are oblivious to the fact that crude oil is virtually useless, it’s manufactured (refineries) into something usable. Those oil derivatives manufactured from crude oil are the basis of more than 6,000 products in our daily lives that did not exist before the 1900’s, and the fuels to move the heavy-weight and long-range needs of aircraft for military, commercial, private and the President’s Air Force One, and merchant ships, and the military and space programs.

Those so-called renewables of wind turbines and solar panels cannot manufacture fuels for the:

Advocates of a carbon-free world underestimate not only how many products and fuels manufactured from crude oil the world already uses, but how much more the world will yet demand. In America, there are nearly as many vehicles as people, while in most of the world, fewer than 1 in 20 people have a car. More than 80 percent of the world population has yet to take a single flight.

The few wealthy countries have short memories of petrochemical products and human ingenuity being the reasons for the world populating from 1 to 8 billion in less than two hundred years. Efforts to cease the use of crude oil will be the greatest threat to civilization, not climate change, and lead the world to an era of guaranteed extreme shortages of fossil fuel products like we had in the decarbonized world in the 1800’s. It can only lead back to shorter life spans, diseases, malnutrition, and weather-related deaths resulting from the elimination of fossil fuels that are benefiting society.

The world leaders are experiencing a “dangerous delusion” of a global transition to “just electricity” that eliminates the use of the fossil fuels that made society achieve so much in a few centuries.

There were almost 700 oil refineries as of January 2020, but as a result on continuous over regulations and permitting delays and the worldwide support of the Environmental, Social, and Governance (ESG) to divest in fossil fuels, the right operating model and level of integration will be crucial for survival and sustained profitability of refineries.

Consequently, one in five oil refineries are expected to cease operations over the next five years. One in five is 20 percent, or almost 140 refineries expected to be shuttered worldwide, resulting in a 20 percent decline in the products manufactured to meet the ever-increasing demands form society. With the reduction in manufacturing capabilities, shortages and inflation in perpetuity are likely the new norm!

And most importantly today, there is a lost reality that the primary usage of crude oil  is not for the generation of electricity, but to manufacture derivatives and fuels which are the ingredients of everything needed by economies and lifestyles to exist and prosper. Energy realism requires that the legislators, policymakers, and media that demonstrate pervasive ignorance about crude oil usage understand the staggering scale of the decarbonization movement.

Yes, the climate is changing, as it has been for four billion years, and will continue to change, and yes, there will be fatalities from the coming climate changes. Climate change is expected to cause approximately 250,000 additional deaths per year, between 2030 and 2050, from malnutrition, malaria, diarrhea, and heat stress.

However, the irresponsible idea that global warming poses an immediate existential risk for the world, that risk will be small in comparison to a world without fossil fuels, while current governments and corporate leaderships are attempting to revert to its decarbonized status in the early 1800’s and before.

The wealthy countries continue to focus on subsidizing intermittent electricity from breezes and sunshine while simultaneously shuttering coal, natural gas, and nuclear power plants that have been providing continuous uninterruptible electricity.  The Trojan Horse results are extreme costs, painful reductions in living standards for all but the richest, national weakness, and societal instability.