[Editor’s Note: Joe Biden, acting as the paid puppet of globalists who want an energy dependent America, is attacking crude oil production her as he begs OPEC for more oil!]

The same guy who just released a 3-day supply of crude oil for America from the U.S. Strategic Petroleum Reserve, also terminated the Keystone XL pipeline that would have provided our country with up to 900,000 barrels of crude oil per day from Canada. President Biden also continues to pursue an aggressive, anti-crude oil agenda that includes nixing pipelines importing crude oil, ditching oil drilling projects and banning new oil leases on federal lands.

Biden’s multiple restrictions on domestic oil production leaves the USA and its economy unnecessarily reliant on foreign governments for our energy needs. Americans should not depend on foreign actors, like OPEC+, for our energy security and instead focus on the real challenges facing our country’s future. Begging OPEC+ to boost crude oil production to combat skyrocketing gas prices while kneecapping abundant U.S. crude oil production is next-level stupidity of whoever is advising the President. 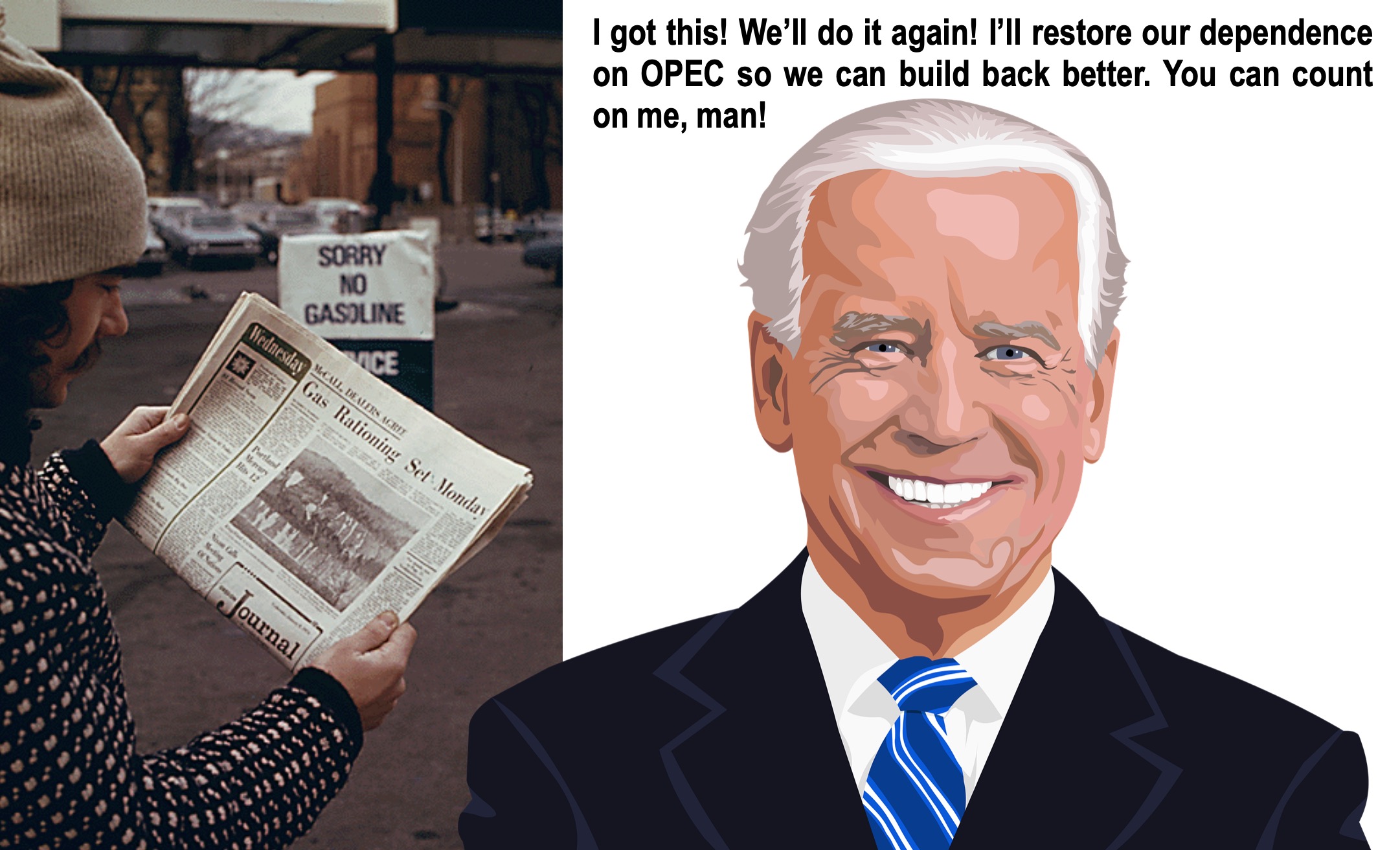 The decarbonization efforts of the Green New Deal (GND) are well under way attempting to utilize breezes and sunshine to replace 2 of the fossil fuels – coal and natural gas – that have been used for generating continuous uninterruptible electricity.

Crude oil is caught on the chopping block efforts to eliminate all three fossil fuels, but crude oil is seldom ever used for electricity generation! Energy realism requires that the legislators, policymakers, and media that demonstrate pervasive ignorance about crude oil usage understand the staggering scale of the decarbonization challenge.

Crude oil gets manufactured into oil derivatives for more than 6,000 products, and into transportation fuels needed by the world’s heavy-weight and long-range aviation, merchant ships, cruise ships, and militaries.

It’s inconceivable that we would divest away from crude oil, just because 2 of the products manufactured from crude oil are gasoline and diesel fuels for the short-range and light-weight equipment like cars and trucks. EV technology is making progress to replace those two products from oil. EV owners have demonstrated that their usage of EV’s for approximately 5,000 miles per year represents a real opportunity to meet that short range need with EV’s.

For the first time in 70 years, through the fracking boom in recent years, the U.S. attained crude oil independence status meaning we were no longer held hostage to unstable Petro-powers and the vagaries of foreign energy supplies.   Under President Trump, America had a very aggressive pro-domestic energy policy, that allowed America to become not only energy independent, which politicians have talked about for decades, but energy dominant.  For the first time since Harry Truman was president, we had more crude oil exports than imports.

Biden has vowed to set the U.S. on course to having a carbon-free electric grid by 2035, but that has virtually nothing to do with crude oil. His mission is to displace coal and natural gas with breezes and sunshine for electricity generation. Surprisingly, Biden must be oblivious to the consequences of his plan as efforts to cease the use of crude oil could be the greatest threat to civilization, not climate change.

Under Biden’s plan to rid America of crude oil and all its products, such a plan would ground the military, space program, and Air Force 1, and mothball the airlines, cruise ships and merchant ships, as well as eliminate the medical industry that is totally reliant on the products made from petroleum derivatives.

The cancellation of the Keystone XL pipeline caused the Canadian crude oil to be transported to the West coast where it is then shipped hallway around the world to China. After China manufacturers the crude oil into usable products. Manufacturing in China with significantly less environmental controls than America results in increased world emissions. Those products are then shipped back to America via air polluting ships to West Coast ports, for American consumption.

Without any crude oil to manufacture, elimination of the crude oil supply chain to the 129 operating refineries in the U.S. would eliminate that manufacturing sector. Without that American refining sector, the demands for the fuels and products that are the basis of our lifestyles and economy would need to be met by foreign refiners exporting to the USA.

After the discovery of crude oil just more than a hundred years ago, we created various modes of transportation, a medical industry, and electronics and communications systems. The oil that reduced infant mortality, extended longevity to more than 80+ and allowed the world to populate to 8 billion in less than two centuries, is now required to provide the food, medical, and communications to maintain and grow that population.

As environmental, social and governance (ESG) factors climb up the agenda there is a lost reality that the primary usage of crude oil  is NOT for the generation of electricity, but to manufacture derivatives and fuels which are the ingredients of everything needed by economies and lifestyles to exist and prosper.

Instead of pursuing a GND green electricity policy that will achieve nothing but skyrocketing electricity prices and more inflation, Biden might want to consider taking steps that will benefit the American people, such as increasing domestic crude oil production to support the manufacturing of thousands of products that lifestyles, infrastructures, and economies are based upon.