Cuomo Cancels Thanksgiving: What Happens When the Police Arrive?

Attorney Chris Denton offers up a terrific question as to what will happen as a result of Andrew Cuomo’s royal edict cancelling Thanksgiving.”

New York Governor Andrew Cuomo, acting more like a monarch than a governor, has “cancelled” large Thanksgiving gatherings by decree (Executive Order N. 202.74) effective Friday the 13th, (an auspicious date) which decreed “to further limit non-essential private residential gatherings to 10 or fewer individuals for any lawful purpose or reason”. (Apparently unlawful purposes such as riots are okay.) The old limit was 50. (Any number will, by context, be arbitrary and capricious.) The Governor recited in his decree that he issued this decree pursuant to section 29-A of Article 2B of the Executive Law by which the Legislature sought to temporarily transfer its legislative powers to the Governor. 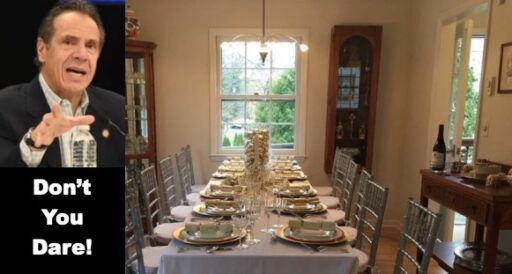 Nowhere in the jurisprudence of New York law or in the New York State Constitution do the People of the State of New York grant to the Legislative Branch the authority or power to delegate, cede, or grant to the Executive Branch, the power to enact, repeal, amend, or modify laws of the State of New York. Therefore every decree that Governor Cuomo makes in which he invokes this purportedly delegated right is per se invalid. This is true because in the United States of America, government has no powers except those which are expressly granted to it by the people. The concept of divine right of kings died at Yorktown in 1781.

The illegality of the Cuomo Executive Order being settled, let’s examine a typical Thanksgiving dinner of 12 people – a mother, a father, three adult children and seven grandchildren.

Unfortunately for this family, who we will call the Jones, they have a spiteful neighbor who watches 12 people going in and out of the house on the morning of Thanksgiving. He promptly calls 911. The reasonable operator tries to convince the neighbor not to file the complaint, but the neighbor threatens to call the New York Times, the Daily News, and King Andrew Cuomo, and to sue the operator. A two person patrol car is dispatched.

The Jones open the front door to the police. The family promptly sits down with their masks on and with their chairs six feet apart. The police tell them that 2 people will have to leave. That means either the senior Jones must leave their own home or two of their children or two of their grand children or any combination of them. All politely refuse to comply while concurrently informing the police that the decree is illegal, and therefore not enforceable. Each family member then turns their smart phones toward the police to record whatever happens next.

The police then announce that they intend to arrest all of them. The family doesn’t move except to start recording. Now the police have roughly three options. First, they can call for back up while the family calls the press and friendly neighbors. The police can begin handcuffing and dragging out crying children and grandparents like Gestapo agents. However, no rational police officer would do this for a 2 person violation of an illegal decree banning the celebration of Thanksgiving by more than 10 people. And if police did act, the internet shaming would follow them even to their obituaries many years later.

Secondly, the police officers can issue appearance tickets and then leave. However, the Thanksgiving 12 will refuse to give their names or to speak another word. And if tickets are issued, then the Thanksgiving 12 will demand a jury trial. Who would possibly convict them? Upon this realization, rational police officers would shift to the third option.

The ranking officer will then turn to the Thanksgiving 12 and announce: “I am going to let you off with a warning. But next year at Thanksgiving, I better not see more than 10 individuals in this house.” The police will leave grim faced until they reach their cars where they will smile and wish each other Happy Thanksgiving. When asked by their superiors why the Jones weren’t ticketed, these street wise officers will say: “Sir, they wore masks and we couldn’t identify them as a consequence. As we thought it prudent to avoid risking ourselves and the entire police force to Covid 19 exposure, we decided not to attempt to remove their masks”

For police like these, we should all be thankful on this holiday.