The claims that U.S. oil companies are gouging Americans at the pump aren’t supported by the economics of a global oil market and the retail dynamics of gasoline, according to the Federal Reserve Bank of Dallas’ recent analysis. Crude oil may account for half of gasoline’s retail price, but U.S firms can’t control the global price or other factors that determine the costs seen at the pump.

Half Of The Puzzle

Oil is sold on a competitive global market, and although the United States is the world’s largest producer of oil and natural gas, it isn’t a spout that the industry can turn off and on. As the Dallas Fed acknowledged earlier this year, the world is experiencing “one of the largest [oil] supply shortfalls since the 1970s” and “efforts to restrain oil and natural gas production in countries such as the U.S. may have to be reconsidered in response to persistent global shortages.”

In the first quarter of 2022, the Dallas Fed’s oil production index saw a dramatic increase, with 52 percent of surveyed oil and natural gas companies reporting an increase in oil production. However, an increase in domestic production doesn’t guarantee a drop in crude prices, as they explain in their recent article:

“Even under the most optimistic view, U.S. production increases would likely add only a few hundred thousand barrels per day above current forecasts. This amounts to a proverbial drop in the bucket in the 100-million-barrel-per-day global oil market, especially relative to a looming reduction in Russian oil exports due to war-related sanctions that could easily reach 3 million barrels per day.”

This simple economic point is lost on the Biden administration’s insistence that oil companies are manipulating the market despite numerous experts and media outlets disputing these claims, including Politico:

“Never mind that the Biden administration has already called on the FTC to issue such a probe, and that previous gasoline price gouging investigations over recent decades have not found any wrongdoing.” (emphasis added)

“The agency is regularly asked to probe gasoline prices at times when consumers are paying more at the pump and regularly reports that it has found no wrongdoing, said Henry Su, a veteran of the FTC now at the law firm Bradley Arant Boult Cummings LLP.” (emphasis added)

The solution is for the Biden administration and other leading global governments to support increased production of oil and natural gas.

Accounting for approximately half the raw material for gasoline, crude oil plays a large role in gasoline prices, but is not the only determining factor. 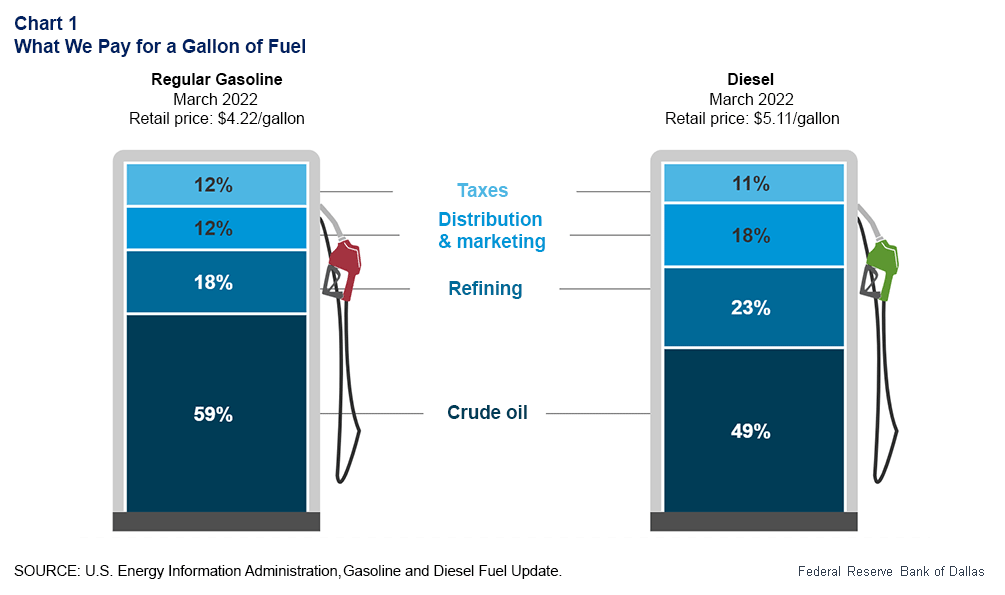 Only one percent of U.S. gasoline stations are owned by the companies that also produce oil, meaning they have little control over the refining, distribution, and marketing of gasoline. This leads to large regional differences and asymmetries in prices across the country. An outage of refining capabilities in Southern California, for instance, had prompted higher regional wholesale fuel prices when prices were falling around the country. This is how the city of Phoenix saw a negligible change at the pump between the March peak and April, whereas Dallas witnessed an 11 percent price decrease.

A key factor not included in the graphic and outside the reach of oil companies is the market analysis of retailers. The Dallas Fed explains that:

“Gas station operators set retail prices based on their expected acquisition cost for the next delivery of fuel from the local distributor, federal and state tax rates, and a markup that covers operating expenses, such as rent, delivery charges and credit card fees.”

It’s clear that high gasoline prices are a fundamental supply-and-demand issue and the solution is for the Biden administration and other leading global governments to support increased production of oil and natural gas to meet growing global demand for energy.