Damascus Citizens for Sustainability is a totally phony shill for the Heinz Endowments, et al and wants to file an equally phony brief in the DRBC lawsuit.

Damascus Citizens for Sustainability is a largely Manhattanite fractivist outfit funded by the Heinz Endowments, among others, and while passing itself off as a group of citizens from my hometown, Damascus, Pennsylvania. They’re as close to being Damascus citizens as I am to be a member of the swank Norwood club in “ultra artsy” Chelsea where “you brush arms with a few celebs.” It is “dripping with elegance [and] sure to impress,” they say.

Timeliness and coherence apparently not required, though, as the group just asked leave of the court to file an amicus brief in DRBC lawsuit brought by the Wayne Land and Mineral Group (WLMG). They filed it late, using the WuFlu as an excuse, and basically asked for permission to throw a shovel full of manure against the wall. WLMG wasn’t impressed and it’s response is beautiful. 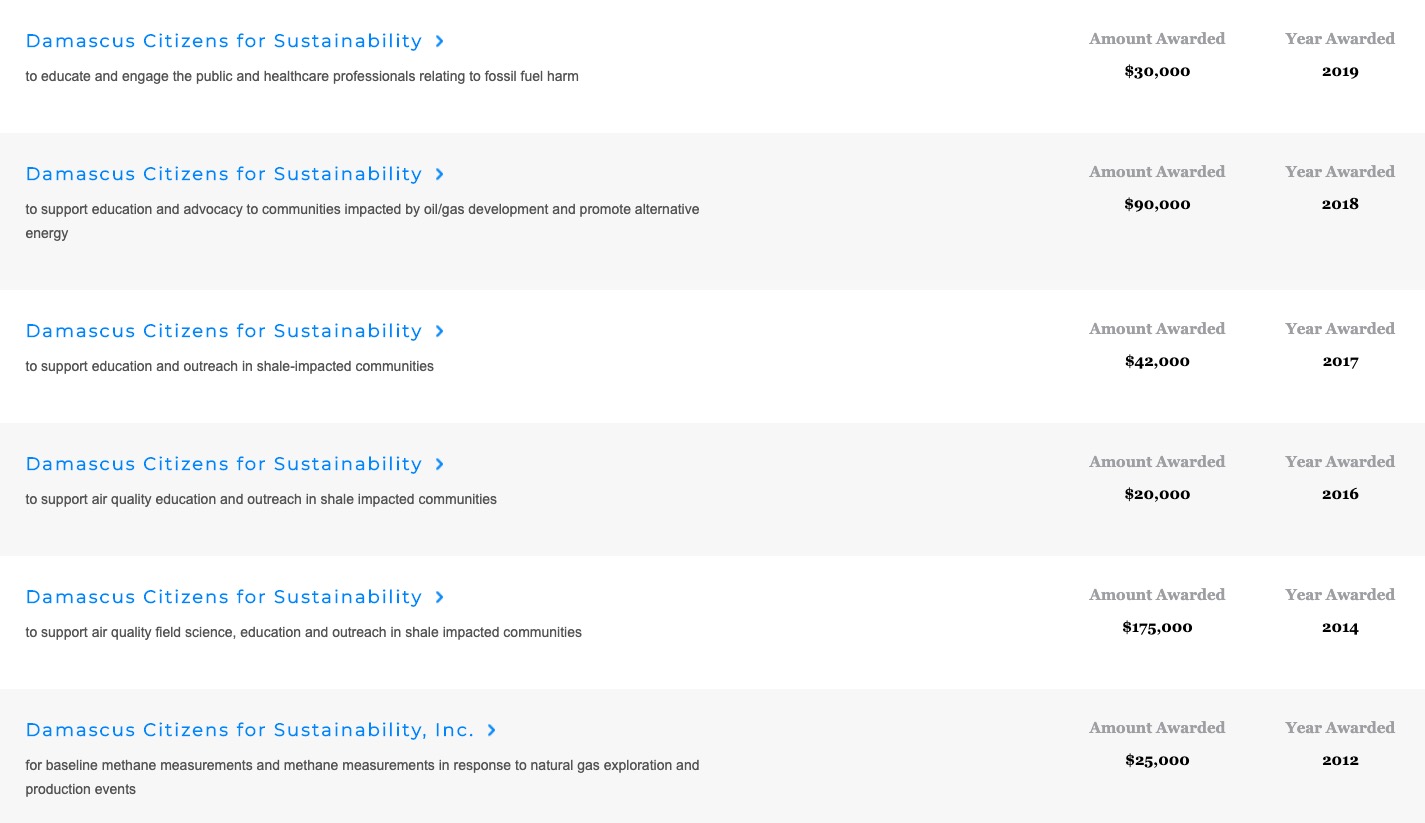 $382,000 from the gentry class Heinz Endowments to support a Manhattanite group caling itself “Damascus Citizens”

Here’s the core argument from the Damascus Citizens (emphasis added):

Damascus Citizens for Sustainability, Inc. (”DCS‘ ) has participated as an amicus curiae party at each step of the case, filing an amicus curiae brief in this Court and again in the Third Circuit Court of Appeals. As the case was proceeding t o briefing, the world changed and a virus took over life around the globe. In March 2020, the chief judge of the Third Circuit issued a general order suspending all hearings and proceedings due to public health concerns. This order was extended through June 30, 2020. DCS is request ing leave to submit an amicus curiae brief in this case within 17 days of the expiration of the most recent general order on June 30, 2020. In other words, by Friday, July 17, 2020. DRBC and DRN have no objection to DCS filing an amicus brief in this case. WLMG opposes this motion.

The purpose of our amicus brief is to better inform this Court about the intent of the drafters of the Rules and Regulations of the DRBC and Compact to both clean up the existing pollution in the River but also to prevent future contamination. Additionally, we want to explain the, extraordinary legal context, involving many exemptions to laws other industries must follow, within which the oil and gas drilling (exploration and production) industry is allowed to operate. It is this situation that would leave a largely unprotected river in a legal and regulatory vacuum if the authority of the DRBC in this case is not affirmed.

Damascus Citizens, in other words, wants to file more than two weeks late and muddy the lawsuit waters with a bunch of crap having no bearing on the legal question and directly refuted by the SRBC, which is governed by the same majority of members and has found no discernible impact on water quality from fracking. And, its allies at the Delaware RiverKeeper a/k/a PovertyKeeper and DRBC—our oppressors—are more than happy to let it do so.

WLMG responded in just beautiful fashion. Here is the core of their argument (emphasis added):

COVID-19 appears to be the fashionable excuse for every delayed filing these days, notwithstanding the fact that there is not an attorney practicing in the United States without a computer and, further, that remote, electronic filing has been available and mandated by this Court for well over a decade.

Damascus Citizens for Sustainability, Inc. (“DCS”), invoking COVID-19 disruptions, seeks leave to file a brief as amicus curiae in support of the pending motions for summary judgment weeks after briefing on those motions has concluded. DCS’s motion should be denied for that reason alone.

On the substance, the DCS’s motion does not indicate its intention to offer this Court with anything “new,” but instead seeks to offer nothing more than a repackaged, second “last word” on behalf of the Commission. The information the DCS seeks to supply the Court is cumulative of information already supplied by the summary judgment movants in spades and, further, is not relevant to the sole issue raised by the Commission’s and Riverkeeper’s pending motions for summary judgment. Those motions ask this Court to determine whether WLMG’s proposed natural gas development activities are a “project” as defined by the Compact.

To the extent the DCS’s proposed brief is being offered by to inform the secondary “substantial effect” question under Section 3.8 of the Compact, that issue is not joined by the pending motions. See Doc. 195 at 3 (suggesting that DSC wants to offer this Court one-sided, cherry-picked information regarding the purported “impacts and pollution caused by fracking”). Whether an activity may have a “substantial effect” on the water resources of the Basin is not relevant to the threshold question of whether that activity is a “project” as defined in Section 1.2(g) of the Compact. You cannot get to “substantial effect” without first going through the “project” door. This Court agrees. See Wayne Land & Mineral Group, LLC v. Del. River Basin Comm’n, 247 F. Supp. 3d 477, 502 (M.D. Pa. 2017). So does the Court of Appeals. See Wayne Land & Mineral Group, LLC v. Del. River Basin Comm’n, 894 F.3d 509, 530 (3d Cir. 2018).

The Court will find no explanation in the DCS’s motion as to how the Court can benefit from, or use, the information to be supplied by the proposed amicus curiae brief to decide the threshold “project” determination raised by the pending motions. The DCS’s motion, therefore, should be denied.

That about says it all The Heinz Endowments (not to mention Pam Solo, her gentry class wanna-be artist trust-funders and enablers who have also funded Damascus Citizens) are wasting a lot of money on these Manhattanite jokers.