The Delaware Riverkeeper has undermined the message DRBC was sending to Pennsylvania state representatives last year. It admits there is gas!

Back in May of last year, two DRBC staffers —Stacey Mulholland, its Government Affairs Lead and one other—were running around Harrisburg from one State Representative to another falsely telling them there was no natural gas in the Delaware River basin anyway. They were doing so to try to stall Rep. Jon Fritz’s takings bill (HB 827).

I wrote about it here and Betty Sutliff later wrote to report how temperamental DRBC Executive Director Steve Tambini was about the whole thing. He didn’t like being called out for lobbying. He has all along, it seemed to us, been singing verses from the Delaware Riverkeeper a/k/a Povertykeeper songbook. He then tried to defend his position by lobbying on the basis there wasn’t any gas anyway and calling it “education.” Now, we have the proof this “education” was nothing more than lying propaganda and, ironically, this proof comes from the Delaware Riverkeeper. 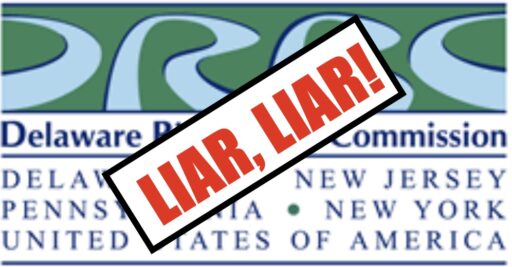 I noted at the time there was “every reason to believe from test well results and geology, that conditions in Northern Wayne County, on the east side of the Lackawanna Syncclinorium (Moosic Mountain) are very similar to those in gas-bountiful Susquehanna County.” That is to say, there is valuable recoverable gas in Central and Northern Wayne County, which is what Tambini’s minions were telling state reps doesn’t exist. This was their rationale for opposing a bill that would classify a DRBC frackling ban as a taking; that there wasn’t any gas, so no one should waste their time on such measures.

I noted “the Delaware Povertykeeper and DRBC wouldn’t have been fighting HB 827 if they didn’t think there was gas to develop. One minute they’re screaming about the damage that would be done and the next they’re telling legislators there’s nothing to it. Only a fool would buy those incompatible arguments.”

Maintaining these diametrically opposed positions is essential to the DRBC, though. It is trying to appease anyone and everyone, other than landowners, of course. It speaks of threats from fracking from one side of its mouth while whispering from the other side that there’s no gas anyway so don’t give equal justice under law a second thought. But, an “expert” report produced for the Delaware Riverkeeper says otherwise.

The report is prepared by Schmid & Company, Inc., Consulting Ecologists, a firm employed by the Delaware Riverkeeper’s radical lawyer, Jordan Yeager, for use in the DRBBC lawsuit brought by the Wayne Land and Mineral Group. It is titled “Environmental Consequences of Proposed Unconventional Gas Well Drilling in the Delaware River Basin, Wayne County, Pennsylvania. Undoubtedly, William Penn Foundation money helped pay for it and it says this:

“If unconventional wells are constructed and operated successfully by WLMG at its proposed well pad, additional gas production from the Marcellus and Utica Shales is virtually certain to occur elsewhere in northern and central Wayne County within the partially known geologic deposits, which are considered potentially more productive than those in eastern Susquehanna County.”

Whoa! The DRBC is telling Pennsylvania reps there is no gas. Meanwhile,

its partner of sorts, the Delaware  Riverkeeper, has submitted a report (as part of its defense in the the Wayne Land and Mineral Group’s lawsuit against the DRBC) saying just the opposite. Let’s hope those state representatives who were lobbied by the DRBC to oppose HB 827 on the basis there is no gas to be developed are paying attention. The DRBC was lying.