Delaware Valley Voters Are the Problem; Gov. Wolf Not So Much

[Editor’s Note: Garland Thompson says I’m too hard on Governor Wolf; that he has a problem with Delaware Valley voters who have simply forgotten their economic heritage.]

Hold on, Tom. While I understand your disappointment with Gov. Tom Wolf’s allowing the Delaware Riverkeeper and her anti-anything-to-do-with-industry friends to interfere with development of infrastructure projects in Southeast Pennsylvania, I do disagree that Wolf is a lock-step clone of New York’s Gov. Cuomo. 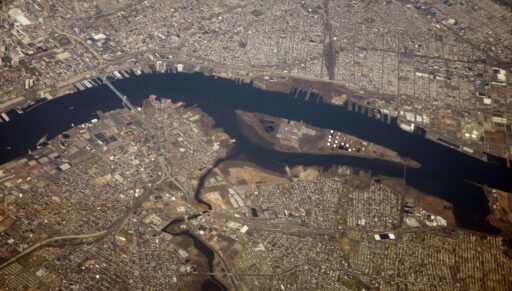 I talked with Tom Wolf during his first gubernatorial run, and it was clear then, as it is now, that Tom Wolf is not the hard-headed ideologue New York’s governor has shown himself to be.
Second, I specifically out to him that the Marcellus Shale resources required a deep-water port, i.e., in Philadelphia, to succeed as a world-class energy center. He agreed, but once in office, he ran into the allegedly liberal-minded loudmouths in Southeast Pennsylvania, who have captured the local stage of public discourse.

Unlike Gov. Cuomo, however, Gov. Tom Wolf vocally supported growth of petrochemical industry in the Commonwealth. I followed his release of the Team Pennsylvania Foundation Report on the potential of a large expansion of ethane “crackers” in this state, projecting room for four new “crackers” to join Shell Chemical’s developing plant at Monaca, Beaver County, on the Ohio River.

I read that report closely, noting that the IHS-Markit analysts who prepared it found the big percentage of plastics makers in the state are located in Greater Philadelphia.
I also went to cover the Marcellus Shale Coalition’s Shale Insight Conference in Pittsburgh, and watched the IHS-Markit guys tell the attendees they didn’t expect big growth of plastics & synthetics manufacturing — i.e., relocation of the existing business to the Ohio Valley — because those companies want to remain close to their customers in the Northeast’s major population centers.

Former Gov. Tom Corbett paved the way for Shell to construct the country’s first ethane “cracker” built outside the Gulf Coast, but his successor Tom Wolf never wavered in his support of its completion despite loud calls by the Riverkeeper and friends to kill that initiative.

I later covered the Republican-only Pennsylvania House hearing on Mariner East pipeline safety issues, held in Middletown, Delaware County, and there watched enforcement officers from the Wolf administration join the Pennsylvania PUC’s senior staffers in rebutting untruthful claims by anti-pipeline activists that the NGLs in Mariner East could escape to form a “color-less” gas “bubble,” odorless and undetectable by endangered neighborhood residents until it exploded & killed everyone in a mile radius.

Similarly, the Wolf Administration officers responded to the allegation there’s been no risk assessment done for this project by reminding the legislators and their audience that not only had a comprehensive risk assessment been turned in to them, the public release of its details posed its own safety risk by revealing vulnerabilities to potential saboteurs.
I filed a story on that hearing on the Marcellus Drilling News web site.

Finally, I watched with interest my former colleagues on the Philadelphia Inquirer’s backward attempts to prevent completion of the Mariner East/Marcus Hook Industrial Center development project, arguing on the Editorial Page I used to serve that Mariner East was the “Wrong Way to Go.”

Then, his re-election campaign safely won, Tom Wolf acceded to members of Middletown’s “Mama Bears” opposing the pipelines demands that the governor go and see for himself what they were complaining about.

Wolf, to his credit, stood up to the “Mama Bears” and their friends, saying he had faith in the Public Utility Commission to see to it their safety was protected.

I, like you and Jim Willis, wondered why, against that background, Wolf vetoed the House-led Bill to promote petrochemical-industry growth when he himself so enthusiastically supported such growth when he introduced the Team Pennsylvania Foundation’s report, which his own Department of Community & Economic Development had funded.

I, like you, noted that the bill had sailed through both the state House and Senate with strong bi-partisan support.

So, I wasn’t surprised that Gov. Wolf quickly signed the resuscitated House bill. I’d theorized to Jim Willis that Wolf had some other issues he was pushing, and used the broad interest in getting this petrochemical initiative launched as a lever.

For me, it’s obvious that this bill, now signed into law, portends opportunities in Southeast Pennsylvania as well as Upstate, for the obvious reasons that not only is the lower Delaware Valley the home of the nation’s second-biggest collection of plastics & synthetics makers, it’s the best port for export of Marcellus Shale bounty.

I raised that last point with Wally Kandel of ShaleCrescentUSA after listening to him proudly argue how good a port Charleston, S.C., was for him to ship Marcellus Shale NGLs to Northern Europe at another Pittsburgh conference.

It’s true that too many Philadelphians and their neighbors think only of negatives when they think at all about the Marcellus Shale, but to be truthful that’s mainly because the advocates for the positive advantages here have allowed the holier-than-everybody-else-on-the-planet environmental nay-sayers to dominate the local public discussion. That has to change, and I personally spend a great deal of time straightening out folks who are fighting against their own prosperity here.

Gov. Wolf’s real problem is that he’s trying to balance the interests of people in Appalachia, where the Marcellus and Utica resources are driving a new prosperity, against the wishful thinking of the under-informed people of the lower Delaware Valley, whose nine counties hold two-thirds of the Commonwealth’s voters.

These are people whose forebears and grandparents prospered in the steel mills, oil refineries, auto and truck plants, makers of boilers, locomotives and railway parts, and, yes, chemical plants, paper mills and pharmaceutical works located in those counties before the OPEC-sparked energy crisis bankrupted so many industries in the Delaware Valley. These folks, thought leaders and voters, have forgotten how much their own growth and career successes grew out of that earlier industrial enterprise’s benefits.

Nobody’s reminding them of that these days, and it’s a problem that will still be here after Tom Wolf leaves office.