DEP Study: RGGI Will Reduce Disposable Income of All Pennsylvanians

As Tom Wolf pushes forward on RGGI without legislative approval, his own DEP study shows it will steal money from your wallet and mine!

Marcellus Drilling News had a great piece yesterday on RGGI. Jim Willis excoriated the Governor and his hapless DEP Secretary for “the DEP and Wolf openly admit ‘We’re going to screw you, but then we’ll give you a little bit of money to make you feel better about losing your job and paying sky-high electric rates.’” You need to read the whole thing and if you don’t have a subscription get one now! What Jim addresses is a news release from DEP promoting thee Governor’s new carbon tax. It was maddening, to say the least, but what I noticed was a link at the bottom that eventually took me to a DEP study done six months ago that blows everything being said by Wolf and company to bits. It proves the RGGI carbon tax will not only steal money from the poor to subsidize the rich, but will reduce the disposable incomes of all Pennsylvanians.

This DEP study was designed by to ‘model’ the impact of the RGGI carbon tax on Pennsylvanians, showing how wonderful it would be by shoveling statistics against the wall and cherry-picking those that supported the concept. It was an epistle of pretense; pretense that the taxes would be spent responsibly and help, not hurt the Commonwealth’s economy. It used a classic approach to doing that, by constructing three scenarios and evaluating the impacts of each to make it appear only one is truly reasonable and planting a seed in thee minds of readers that this is the way things would go. They won’t, of course. Indeed, the news release already makes that clear.

Wading through the morass of statistics in the DEP study reveals a few meaningful tables. The first is this one:

What do the terms mean? Here’s the simple breakdown:

As one can easily see, the Balanced Approach Scenario described in the DEP study involves no bill assistance to low-income households, such assistance being described innocuously as ‘discounts.’ Keep that in mind, but focus for the moment on the fact this scenario would represent huge ‘investments’ (read taxpayer subsidies) in uneconomical (and recently proven undependable) utility scale solar and wind, along with more ‘investments’ in electric vehicles for upscale virtue signalers. A big green tax and spend program intended to reward fat-cat green energy hedge-fund investors who now finance the political campaigns of trust-funders such as Wolf. 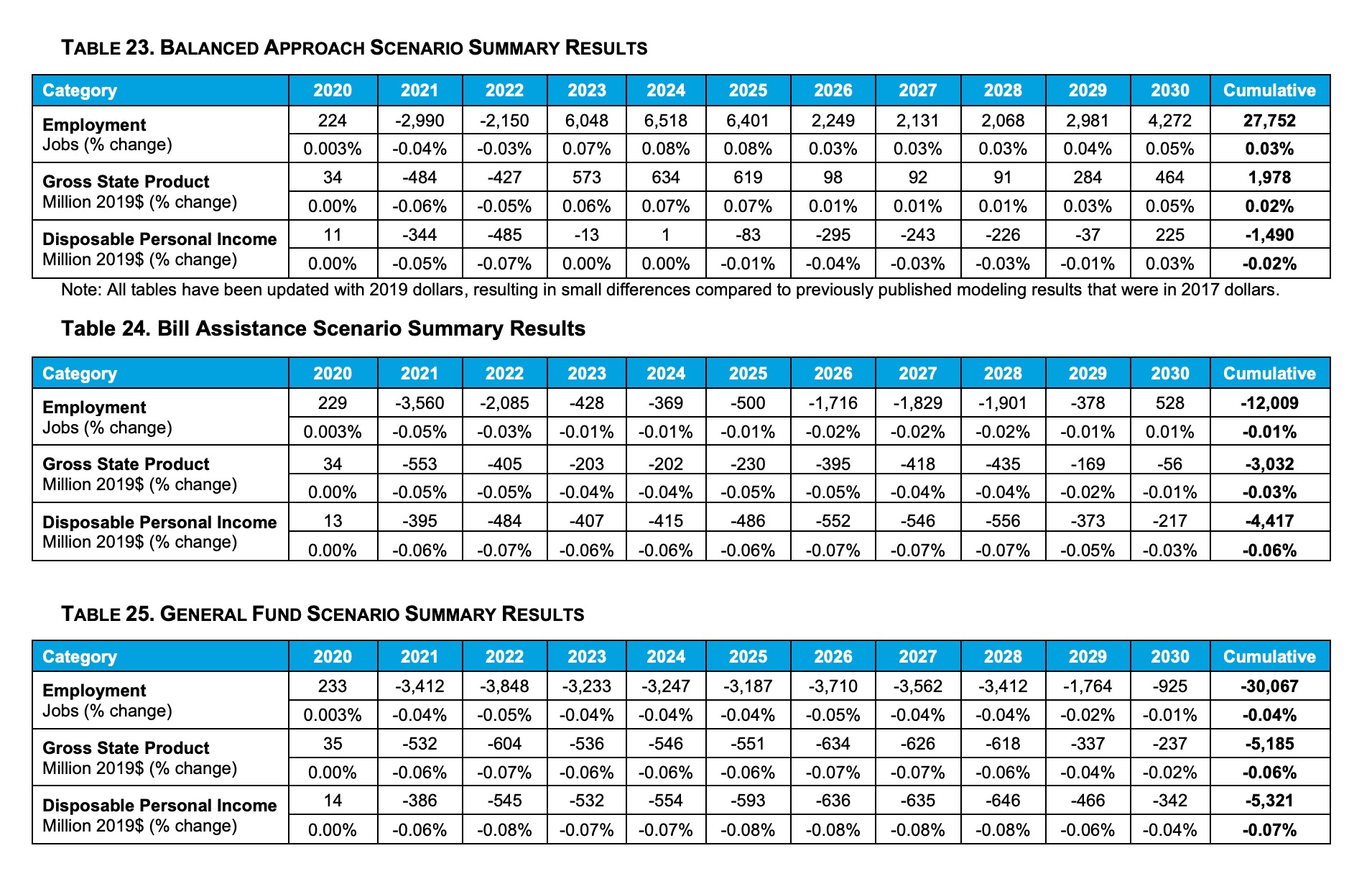 There are some key things to notice from these DEP study tables of RGGI carbon tax impacts on Pennsylvania families:

That last point is particularly important. No business would ever invest in something without discounting future cash flow to know whether it would produce a a rate of return comparable to just putting the money in Treasury bills or some other safe investment. That’s the real world. The DEP study acknowledges that in some material buried deep in it. Table 27 of the DEP study, regarding the discounted values associated with the Bill Assistance Scenario will serve to illustrate Tom Wolf’s gang is distorting the numbers and hiding the real impacts of his RGGI carbon tax:

Look carefully at this table and you’ll notice:

So, there you have it; the DEP study shows none of the three scenarios for spending RGGI carbon taxes make any sense economically. There is no rosy scenario. The Bill Assistance Scenario is an ugly weed, in fact. So, guess which one the Tom Wolf gang of Keystone Cops is pursuing? Read this from their news release and weep (emphasis added):

“Throughout the process of developing the regulation to take part in RGGI we have heard from stakeholders that there must be guidelines in place to ensure that the most vulnerable Pennsylvanians are not put at further risk,” said DEP Secretary Patrick McDonnell. “Confronting the threat of climate change cannot come at the expense of vulnerable communities, and these principles will guide us in finalizing the RGGI regulation and associated community investments.”

The RGGI Equity Principles include:

“These principles will help guide the development of the final RGGI regulation, and how the investments of the revenue from the allowance auctions will be made,” said McDonnell.

Yes, the DEP study from last year was pure smoke and mirrors. Wolf has no intention of pursuing even the least bad option. No, he’s just announced he intends to pursue the second worst option, which is a complete turkey in terms of disposable income. Moreover, he aims to achieve “equity” the new watchword for income distribution, which means some folks will see their wages coerced from them to pass out to others on the basis of the completely phony environmental justice theory. If the theory was valid he’d offering to compensate DRBC landowners for the gas rights he just voted to abscond from them, but you can bet your life that won’t happen, which is precisely why the RGGI carbon tax is nothing but a political scam and the DEP study proves it.