The Federal Reserve Bank of Dallas recently acknowledged the global supply of oil is experiencing “one of the largest supply shortfalls since the 1970s” and that “efforts to restrain oil and gas production in countries such as the U.S. may have to be reconsidered in response to persistent global shortages.”

This may be the first time a federal agency has acknowledged the impacts that existing policies are having on U.S. oil and natural gas supply that, especially when coupled with “supply-chain bottlenecks, labor shortages and the insistence of public investors on capital discipline,” are making it challenging for producers to ramp up production.

The good news is that despite these significant challenges, the Dallas Fed’s recent Energy Survey finds that there has been significant growth in production, according to E&P and oilfield services firms located in Texas, northern Louisiana and southern New Mexico. Data collected from 141 energy companies from March 9-17 reveals much about the outlook of oil and natural gas production in the region.

January-March of 2022 brought cost increases, as well, with the indexes of input cost, finding and development costs, and lease operating expenses all reaching record highs in the survey’s six-year history. One anonymous E&P survey respondent suggested supply chain issues are to blame:

“The largest cost increase over the past 12 months for the oil and gas industry is from tubular steel. The inventory has shrunk and lead times have increased.”

Survey results reveal record highs in labor market indexes, including those of employment numbers, hours worked, and wages received. However, many oilfield services respondents shared that this growth does not match that of energy demand.

“We are seeing a severe shortage of qualified employees, which is severely impeding our ability to perform our services. The costs of labor are going up at a very steep rate.”

Further, when asked about expectations for the remainder of the year, slightly more than half of respondents replied that employee numbers will remain the same despite the need for qualified employees. 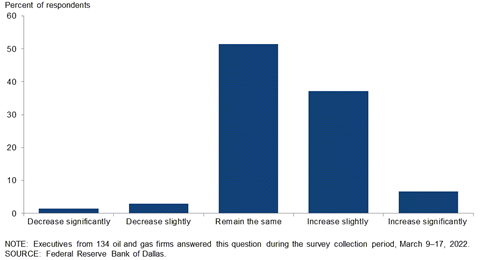 As previously discussed, energy prices had been increasing prior to Russia’s invasion of Ukraine. The conflict only exacerbated the problem due to international demand for Russian energy. The country is the third largest oil producer, however, sales of Russian oil have since plummeted concerning industry analysts of a global economic downturn.

“The Russian–Ukraine war is going to continue to wreak havoc on markets.”

“Prices for oil and gas are totally unpredictable now and will remain so in the near future.”

“Considering the international issues generally and with respect to the Russia–Ukraine war, pricing projections for hydrocarbons in any form are highly speculative, at best.”

Due to current market expectations, survey respondents predict that the price of West Texas Intermediate (WTI) oil will end the year somewhere between $50-200 per barrel, with an average of $93 per barrel. 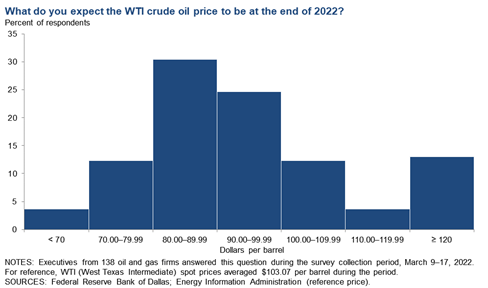 The majority of respondents also expect the price of Henry Hub natural gas to land between $4.00-4.99 by year-end, with an average of $4.57 per million British thermal units (MMBtu). 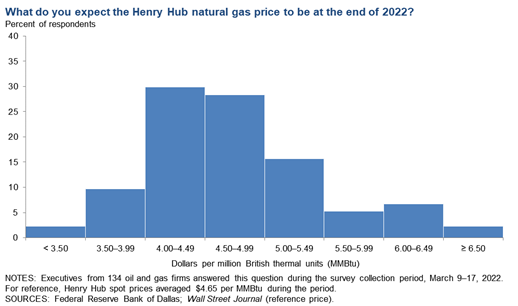 Uncertainty weighs on U.S. operators, as well, which is reflected in the recent survey as the outlook uncertainty index rose from -1.5 to 31.9. The majority of E&P and oilfield services firms are uncertain about the future of the industry, with many placing blame on the Biden administration for favoring oil and natural gas imports over cleaner and more reliable domestic production.

“The current administration will only hurt energy companies, driving up prices and severely affecting the middle guy that drives the economy. We are in for a world of hurt for the next three years.”

“As of the date of this survey, the U.S. administration seems unwilling to enable the most immediate and simplistic changes that could increase U.S. hydrocarbon production, or replace Russian hydrocarbons in U.S. consumption with hydrocarbons from sources that do not carry the same level of political, social and economic issues of Russian hydrocarbons.”

“The perceived or real anticarbon extraction policies by the administration have limited our customers, the oil companies, from employing the capital necessary to increase production of oil and gas in the U.S., which is the most environmentally responsible producer in the world.”

The Biden administration recently called on oil and gas operators to increase supply, despite a regulatory environment that is unfriendly toward fossil fuels. In order to achieve energy independence, properly regulate the market, and provide reliable energy to the globe, JPMorgan Chase CEO Jamie Dimon offers one solution.

According to Dimon, the Biden administration should create a “Marshall Plan” to increase domestic natural gas production, develop liquified natural gas (LNG) facilities in Europe, and invest further in hydrogen and carbon capture initiatives. Dimon is pushing President Biden to be more supportive of American producers by investing in the industry, which he predicts will in-turn allow oil and gas companies to increase production.

As revealed in the Dallas Fed Energy Survey, uncertainty surrounds the industry. From oil and gas production and commodity prices to international energy crises and market confusion, one thing is certain: Domestic production is favorable, even to banks.