The Federal judge handling the Wayne Land and Mineral Group lawsuit against the DRBC has been overruled again. He must consider if PA Senators have standing.

The DRBC case has taken several interesting turns and this week produced another. Once again, the Third Circuit Court of Appeals has rejected one of District Judge Mariani’s decisions in the case. This time it was the latter’s refusal to allow three Pennsylvania State Senators to intervene in the case. It was the second time Mariani had denied Senators Scarnati, Baker and Yaw intervenor status, but the Senators appealed this one and the Third Circuit has said the Judge indeed acted too hastily.

The Third Circuit panel who reversed Mariani’s decision in this aspect of the DRBC case are absolutely correct. The question is why the Judge decided the way he did. He accepted the self-interested Delaware Riverkeeper as having legal standing. but then turned around and denied the same to three elected officials who represent over 768,000 Pennsylvania residents in the State Senate. How could this be? 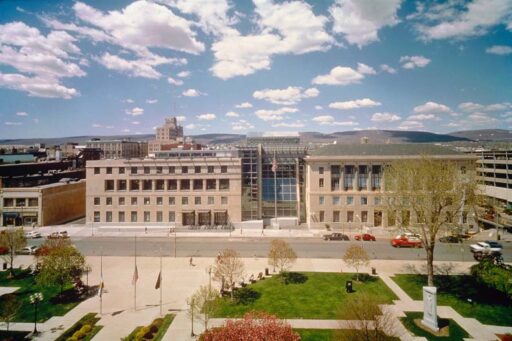 Intervening in Federal case requires having legal standing to do so. This is to supposedly ensure the Federal courts aren’t overwhelmed by special interests who don’t really have a definable interest in a particular case. Article III of the U.S. Constitution defines the judicial powers of Federal courts. Over the years, certain rules intended to clarify matters have served to muddy them up, as is so often the case with governmental action. One can get a good sense of just how muddy by reading this explanation, but here is the essence (emphasis added):

Although the Court has been inconsistent, it has now settled upon the rule that, “at an irreducible minimum,” the constitutional requisites under Article III for the existence of standing are that the plaintiff must personally have: 1) suffered some actual or threatened injury; 2) that injury can fairly be traced to the challenged action of the defendant; and 3) that the injury is likely to be redressed by a favorable decision.

For a time, the actual or threatened injury requirement noted above included an additional requirement that such injury be the product of “a wrong which directly results in the violation of a legal right.” In other words, the injury needs to be “one of property, one arising out of contract, one protected against tortuous invasion, or one founded in a statute which confers a privilege.” … Despite this test, the observable tendency of the Court was to find standing in cases which were grounded in injuries far removed from property rights.

In any event, the “legal rights” language has now been dispensed with. Rejection of this doctrine occurred in two administrative law cases in which the Court announced that parties had standing when they suffered “injury in fact” to some interest, “economic or otherwise,” that is arguably within the zone of interest to be protected or regulated by the statute or constitutional provision in question. Political, environmental, aesthetic, and social interests, when impaired, now afford a basis for making constitutional attacks upon governmental action.

It doesn’t take a legal mind to see the problem. The rules have been so clarified at this point that no one knows what they mean and, in fact, they can often mean whatever a judge wants them to mean. Rather than keeping out the special interests with nothing tangible at stake the rules have now thrown open the door to not only Delaware River Queen of Obstruction but anyone and everyone who claims an interest, unless, of course, you’re a Pennsylvania State Senator who has actual responsibilities for the Commonwealth and makes the laws. One gets a sense of how far from the original intent things have migrated in this DC Court of Appeals decision regarding the PennEast Pipeline:

We also conclude that Riverkeeper established Article III standing. Although FERC does not renew its standing objections on appeal, Article III standing is an element of subject-matter jurisdiction, so we must consider that issue regardless. SeeSteel Co. v. Citizens for a Better Env’t, 523 U.S. 83, 94–95 (1998). As the district court explained, several named members of the Delaware Riverkeeper Network—including Ms. van Rossum—filed declarations alleging aesthetic, recreational, and property injuries that they would likely suffer if a specific, identified natural-gas pipeline were approved by FERC and built.

Get that? Maya would suffer aesthetic injuries from a pipeline and that was all that was required to secure standing to intervene. If Maya sees her shadow because the sun shines through the pipeline right-of-way she’s hiking, that’s an injury and that allows her in court to spend the Hass family’s money fighting oil and gas development. This is how twisted the law has become.

Is the Third Circuit seeing this, too? Do they recognize the absurdity of letting the perpetually angry and aesthetically offended Delaware PovertyKeeper into the DRBC case, while keeping out State Senators with real interests; like state sovereignty, for example? Could be. Regardless, there are several aspects of this generally unexpected decision that are quite intriguing. Take, for example, the very nice history of the DRBC case that is worked into it. It includes the following little gems that are easy to miss when you’re too focused on the intricacies of legal argument (citations deleted and emphasis added):

In late 1961, concurrent legislation in Congress and the states of Delaware, New Jersey, New York, and Pennsylvania adopted into law the Delaware River Basin Compact. That agreement was designed in part to centralize and coordinate among the states “the planning, conservation, utilization, development, management and control of the water resources of the basin.”

To this end, the Compact created an interstate agency, the Delaware River Basin Commission (DRBC), and delegated to it several powers. Among those powers is the authority to review and approve any “project having a substantial effect on the water resources of the basin.” The scope of this power in turn depends upon the definition of two terms. First, the Compact defines “project” as “any work, service or activity which is separately planned, financed, or identified by the commission, or any separate facility undertaken or to be undertaken within a specified area, for the conservation, utilization, control, development or management of water resources which can be established and utilized independently or as an addition to an existing facility, and can be considered as a separate entity for purposes of evaluation.”

Second, it defines “water resources” as “includ[ing] water and related natural resources in, on, under, or above the ground, including related uses of land, which are subject to beneficial use, ownership or control.”

Despite these definitions, the extent of the DRBC’s review-and-approval authority remains uncertain, and that uncertainty lies at the heart of the underlying dispute in this case. In 2009, the then-Executive Director of the DRBC, Carol R. Collier, invoked § 3.8 to regulate horizontal drilling and hydraulic fracturing, or fracking, in the Basin. Concerned that these activities “if not properly performed may cause adverse environmental effects, including on water resources,” Collier issued a “Determination” giving “notice to natural gas extraction project sponsors that they may not commence any natural gas extraction project located in shale formations within the drainage area of Special Protection Waters without first applying for and obtaining [DRBC] approval.”

A “project” was in turn said to “encompass[] the drilling pad upon which a well intended for eventual production is located, all appurtenant facilities and activities related thereto and all locations of water withdrawals used or to be used to supply water to the project.”

Notice how the Third Circuit emphasizes the uncertainty the DRBC has leveraged to expand its authority in mission creep style. It also, by quoting the real life tree-hugger Carol Collier, illustrates how she changed the original mission of the DRBC from water to the much broader mean-anything “environmental effects” with water being but merely a part of it. And, via this sleight of hand, she shifted regulation from water projects to “natural gas extraction projects.” This concise summary brings home struggle, doesn’t it?

The Third Circuit’s opinion details more of the history, noting the Senators had previously sought to intervene in the DRBC case on the basis that the “DRBC is nullifying the General Assembly’s lawmaking power by effectively countermanding the directives of duly enacted laws that permit” various fracking-related activities.” The Senators, it observes, sought “to protect the authority and legislative prerogative of the Pennsylvania Senate and the Pennsylvania General Assembly to regulate commercial activities in Pennsylvania.” This was prior to Judge Mariani’s dismissal of the DRBC case, which decision was, of course, overturned, throwing the whole matter into his hands where it still is.

The Third Circuit found “the District Court erred when it decided that the Commission’s project review authority under the terms of the Compact unambiguously includes Wayne’s proposed activities” and, on remand, the Senators again sought to intervene. This was opposed by both the DRBC and the PovertyKeeper and here is how the Third Circuit describes it:

This time, they presented a unique proposed complaint, articulating two grounds for relief. In Count I, they requested that the District Court “invalidate the de facto moratorium and enjoin its further enforcement,” arguing that it “violates the terms of the Compact because it exceeds the scope of authority ceded to the [DRBC] under the Compact,” Alternatively, in Count II, the Senators requested an order that the DRBC “provide just compensation for the deprivation of the economic value of the property in question.” According to the Senators, even if the Determinations are a valid exercise of the DRBC’s authority, they nevertheless constitute “a regulatory taking without just compensation” under the Fifth Amendment.

The DRBC and the Riverkeeper again opposed the Senators’ attempt to intervene. This time, however, neither party contended that the Senators lack standing, resting their arguments chiefly on the merits of the Senators’ motion. The District Court agreed, denying the motion because the Senators had not shown a “significantly protectable interest in th[e] litigation.” The Senators timely appealed.

The Senator’s interest in protecting the sovereignty of one of the DRBC member states and the property rights of those impacted by DRBC mission creep don’t constitute a “significantly protectable” interest in the DRBC case? You’ve got to be kidding! Those are the reasons we elect State Senators. That is their job and if that doesn’t give them standing in court, what in the name of God would? How have we so corrupted the law as to turn it inside out and grant  standing to the hired malcontents who intend to do more than obstruct, while the very people charged with responsibility and having a real stake in the issues are chased out of court? How is this possible? That seems to be the question the Third Circuit is asking.

The Third Circuit also seems to be recognizing the fact a moratorium, whether officially declared or not, is, in fact, a regulation enacted without the benefit of due process; regulation by fiat rather than process, which the DRBC has now gotten away with for a decade. Landowners and citizens of the Upper Delaware have been robbed and the DRBC case is about justice. The DRBC case is the people’s lawsuit and, once again, the Third Circuit has thrown it back to Judge Mariani to sort out:

Read between the lines and it appears the Third Circuit is also telling Judge Mariani to smarten up. They’re telling him that if he’s going to recognize the Delaware PovertyKeeper and its arguments, then it damn well better entertain the standing and views of the folks with actual responsibility, the Senators. He’d better allow for the legitimate intervenors if he’s going to entertain the interlopers.