DRBC Democrats Support the Steal and Launch Attack on Landowners

[Editor’s Note: Devious demagogic DRBC Democrats launch an attack on landowners to avoid compensating them for gas rights they aim to steal.]

In a brilliant move aimed at boxing in the Delaware River Basin Commission (DRBC), two northeastern Pennsylvania State Senators–Gene Yaw and Lisa Baker–along with members of the PA Senate Republican Caucus, filed a lawsuit in January against the DRBC accusing the quasi-governmental agency of “taking” the property rights of PA residents without just compensation under the law. A group of 16 Pennsylvania Democrat Senators has just filed to “intervene” in the lawsuit.

By intervene, we mean they would become a named party in the lawsuit with the right to file briefs, etc. The aim of the Senate Democrats is to undo the lawsuit, work against their Republican counterparts in an attempt to keep the residents of Wayne and Pike counties who want to allow shale drilling banned from doing so.

The lawsuit launched by Republicans would make the DRBC compensate landowners in Wayne and Pike counties, where there is drillable shale, for (in essence) banning fracking. If successful, the Republican takings lawsuit could run into the multiple billions of dollars (bankrupting the DRBC). The DRBC is guilty of “taking” the property rights away from those residents via the frack ban without just compensation as provided for under the U.S. Constitution. The question is, will the DRBC be made to pay for it?

And now, inexplicably, Democrat Senators who should be protecting PA citizens are instead trying to screw them with this lawsuit. Go figure.

Leftist radical groups funded by gentry class outfits such as the William Penn Foundation, including Conservation Voters of Pennsylvania, Delaware Riverkeeper, and PennEnvironment are cheering the Dems:

On March 12, a group of 16 PA Senate Democratic Caucus members filed a motion to intervene in the lawsuit brought by the entire PA Senate Republican Caucus to overturn the ban on natural gas fracking adopted by the Delaware River Basin Commission.

Sen. Gene Yaw (R-Lycoming), the Majority Chair of the Senate Environmental Resources and Energy Committee, and Sen. Lisa Baker (R-Luzerne) as well as the entire Senate Republican Caucus and Damascus Township in Wayne County joined in the lawsuit against DRBC.

The Republican lawsuit was filed in support of ongoing legal efforts by Wayne County landowners to overturn the Delaware River Basin drilling moratorium dating back before 2017. Read more here.

“Clean water and air is a constitutional right for all Pennsylvanians, and it’s the duty of the General Assembly to ensure those rights are not infringed upon,” said Sen. Steve Santarsiero. “The people of Bucks County – and the rest of the Delaware River Basin – have a constitutional right to clean, safe drinking water. We are not going to allow the oil and gas industry to contaminate that water. Working within its authority, the DRBC has been a steadfast champion for protecting the assets of the Delaware River Basin since its inception. Thanks to the DRBC and the work of environmental advocates, an incredible amount of progress has been made over the years to clean our waterways and create a reliable source of drinking water for millions of people. We have come too far to cede that progress to the damaging effects of fracking on our environment and land.”

“There is mounting evidence from throughout our Commonwealth that fracking cannot be conducted safely and, in many cases, permanently and completely contaminates our shared drinking water resources,” said Sen. Katie Muth. “I applaud the Delaware River Basin Commission for preventing this dangerous and harmful industrial activity from rendering the drinking water for 8.3 million Pennsylvanians unsafe and unusable. Moreover, I am appalled that my Senate colleagues from the Majority Party are willing to sacrifice the health of their constituents in the name of industry profit. Without water, our homes are rendered valueless, our public health severely deteriorates due to toxic and radioactive fracking waste, and our environment is polluted for generations to come. I stand in defense of the public health and environmental quality for all Pennsylvanians and strongly oppose any effort to harm our drinking water resources in the name of corporate greed.”

Maya van Rossum, leader of the Delaware Riverkeeper Network said, “The Delaware River is irreplaceably important to our entire region. To allow it to be sacrificed to the fracking industry, to be used to advance the climate crisis, and to be used to help advance an industry that is devastating the health, safety, lives, property values, quality of life and local economies of entire communities is indefensible. It is even worse that the republican legislative caucus, Senators Yaw and Baker would be seeking to misuse Pennsylvania’s constitutional environmental rights amendment and to deny Pennsylvania’s support for the Delaware River Basin Commission is an abuse of power and trust. I would like to thank Senator Steve Santarsiero and the legislators of the Democratic Caucus for seeking to join the ongoing lawsuit so they can rise up and defend our river, our environment and the environmental rights of the people of Pennsylvania.”

Note that almost all of the Democrat Senators attempting to interfere in the takings lawsuit are from the Philadelphia area. One is from Pittsburgh. What does that tell you?

The fracking debate took center stage Friday, when the state Senate Democratic Caucus, led by Sen. Steve Santarsiero, filed a motion to intervene in a lawsuit seeking to stem Republican attempts to again open up the Delaware River basin to fracking.

Hydraulic fracturing, also referred to as “fracking,” is the process of drilling into host formations such as shales and tight sandstones, and injecting fluids and sand under pressures great enough to fracture the rock formations to allow the extraction of oil and gas, according to the Environmental Protection Agency.

The motion filed by the caucus seeks to intervene in the case of Yaw v. The Delaware River Basin Commission that was filed after the regulatory agency voted last month to ban fracking in the watershed. Yaw and other GOP lawmakers want the ban overturned…

Yaw was outspoken about the Delaware River Basin Commission’s actions to ban natural gas exploration and drilling in the basin.

“The DRBC ban is not just an assault on a highly regulated industry that employs thousands of Pennsylvanians, but it’s another example of neighboring state’s dictating our energy policy,” said Yaw, who is chair of the Environmental Resources and Energy Committee. “The Commission is using New York’s failed policies to institute a ban on development. Pennsylvania has robust rules and regulations in place to protect our environmental resources, which have allowed for the safe development of natural gas in our state.

“This action serves to undermine economic development and job growth in the region and statewide.”

His lawsuit argues that the ban strips land owners of their right to drilling royalties, and has prevented Pennsylvania from leasing public lands to the gas industry and collecting fees from gas development.

Editor’s Note: Reading the irresponsible demagoguery of Sen. Katie Muth as she applauds the DRBC for “preventing this dangerous and harmful industrial activity from rendering the drinking water for 8.3 million Pennsylvanians unsafe and unusable,” suggests it’s all about “industry profit,” and asserts that “without water, our homes are rendered valueless,” is enough to make one throw up.

She knows full well the DRBC is governed by the same majority as the SRBC where the latter has declared fracking has had “no discernible impact” on stream water quality.

She also knows the Yaw lawsuit is not about the ban per se or industry activity, but rather the rights of landowners to just compensation if their gas rights are to be coerced from them.

Finally, she knows well her home would be valueless with natural gas, as this clip from a recent Senate  public hearing. It was on the subject of carbon capture and sequestration and she used her time to trash natural gas, gas pipelines and everything in between; all from the comfort of her home office, with clothes, furniture, eye-liner/makeup and a hundred other things manufactured from gas plainly visible to all: 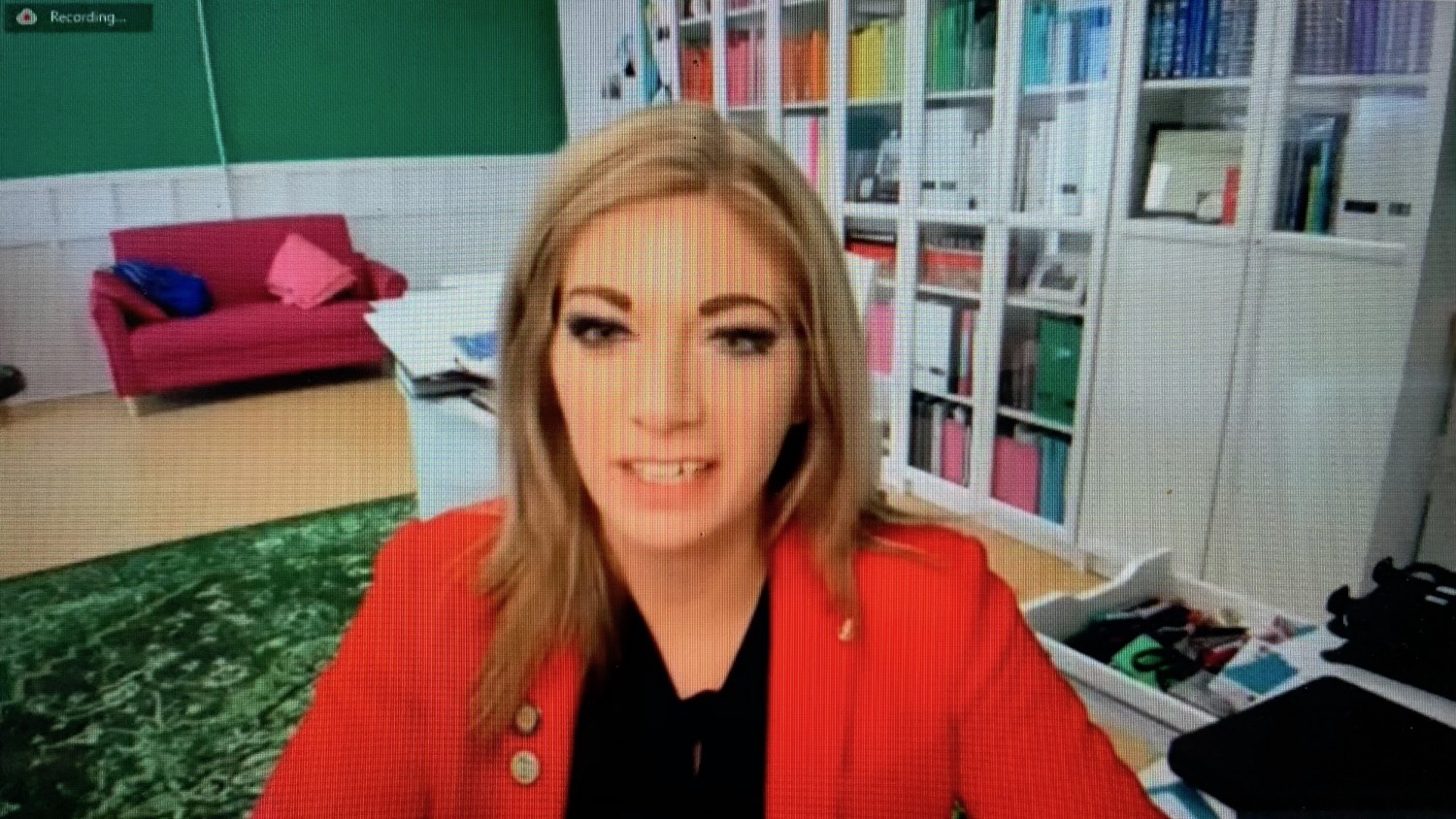 Senator Katie Muth — surrounded, clothed and made up with products from natural gas as she condemns it — all the while arguing to steal the gas rights of DRBC region residents.