DRBC Executive Director Steve Tambini didn’t like being called out for lobbying the Pennsylvania legislature in opposition to Jonathan Fritz’s H.B. 827.

On June 6, 2019, several members of the Upper Delaware River Basin Citizens attended the Upper Delaware Council (UDC) meeting in Narrowsburg.  DRBC Executive Director Steve Tambini was in attendance representing the DRBC. Following Mr. Tambini’s status report, he was asked by one member of the council about the DRBC staffers who were reportedly lobbying legislators in Harrisburg to vote no on H.B. 827 and telling the legislators that there was no gas here.  Mr. Tambini denied knowledge of that and said that DRBC staffers frequently go to Harrisburg to “educate” legislators. 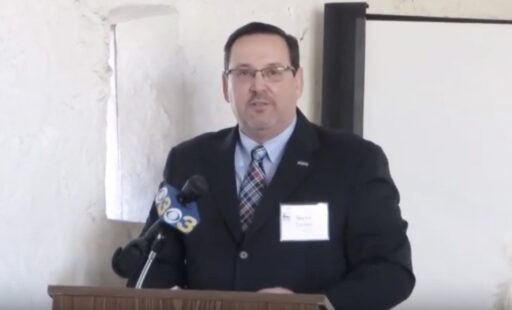 With that, I spoke up and gave him the name of the DRBC staffer, Stacey Mulholland, who was there doing the lobbying. I also stated our sources were pretty straight regarding what they were saying.  He then admitted the DRBC opposes H.B. 827 but continued to insist the staffers were educating and not lobbying.  I pressed him further about his semantics and then specifically asked him if this was an ethics violation.  He emphatically denied that it was an ethics violation. We’ll see, but here are the relevant definitions of lobbying from Pennsylvania law:

Lobbying. An effort to influence legislative action or administrative action in this Commonwealth. The term includes: (1) direct or indirect communication; (2) office expenses; and (3) providing any gift, hospitality, transportation or lodging to a State official or employee for the purpose of advancing the interest of the lobbyist or principal. 65 Pa. Stat. and Cons. Stat. Ann. § 13A03.

Lobbyist. Any individual, association, corporation, partnership, business trust or other entity that engages in lobbying on behalf of a principal for economic consideration. The term includes an attorney at law while engaged in lobbying. 65 Pa. Stat. and Cons. Stat. Ann. § 13A03.

Whether it was lobbying or “education,” we know Pennsylvania taxpayer money given to the DRBC has been used to challenge proposed Pennsylvania legislation. And, Steve Tambini didn’t like being called out on it.

Public comment was reserved for the end of the meeting.  At that time, I also asked Tambini to name industries in the basin that have been banned due to “possible risk.”  His response was that this question was related to natural gas and then preempted the rest of his response with a snarky, “Ms. Sutliff knows.” He went on to say that they are under litigation and referred to the lawsuit currently against the DRBC. He refused to answer my question but, instead, gave the pat answer about how the DRBC is currently reviewing the public comment.

Of course, the obvious answer to my question is that there have been no industries in the basin, across the Commonwealth, or even across the country that have been banned due to “possible risk.”  If that were the case, all industries would be shut down and the world would come to a standstill.

As a follow up question, I asked him about the four voting members of the Commission, the four Governors who already said they would vote for a total ban before the public comment was even received, tabulated, and reviewed. Again, he gave the same pat answer about how they were in the process of reviewing the public comments and refused to answer my question.

With that, another member of UDRBC quoted Mr. Tambini verbatim from his testimony before the State Government Committee on June 11, 2018, and told him those were his exact words a year ago.  So, they have been reviewing those comments for a year now.  He then asked Mr. Tambini what they have been doing all this time, nothing?

Mr. Tambini’s demeanor was definitely, as one member of the council put it, “testy, rude, and obviously not happy.”  Another said he “lost control.”

Mr. Tambini was the first one out of the building, probably because he did not have his usual entourage, Maya and Company, there to defend him and was caught off guard by the presence of UDRBC members and the tough questions that were asked. The questions asked were not even related to the Wayne Land and Mineral Group lawsuit. That, rather, has to do with the DRBC overstepping its Compact into land use issues by trying to say a well pad is a project. The questions at the UDC meeting were all about the proposed ban and the public comment.  I felt that his answer to me was snarky, but then he is not an elected official, so I guess he doesn’t feel the need to be polite or answer to the public even about public comment.