The DRBC lost yesterday, as the Pennsylvania House advanced the HB 827 economic justice bill, but it sent in a lobbyist to influence the vote of its member.

Imagine your Borough Council or Township Board of Supervisors officially joins a Regional Council of Governments created to advance the interests of the combined municipalities involved, including your own. Imagine further the staff of this Regional Council of Governments then turns around and starts coming to your Borough Council or Board of Supervisors meetings to tell them what to do.

Well, that’s what just happened in Harrisburg as the Stacey Mulholland and another member of the DRBC staff apparently descended on the Pennsylvania House of Representatives to lobby against HB 827, the economic justice for DRBC takings legislation. If anything proves what a rogue agency the DRBC really is, this is it.

Yesterday was a very successful day for those of us who want economic justice in the upper basin. Representative Jon Fritz’s HB 827 bill, “An Act designating certain activity by the Delaware River Basin Commission as the exercise of the power of eminent domain that entitles the owners of the property in question to appropriate and just compensation” advanced through a second floor vote by the full House. It will now be up for a third and final reading on Monday. More on that in a moment.

It was a great day for those of us in the upper basin, but even more so for Fritz who worked the floor to get 10 Democratic votes to offset Southeast sellout Republicans buying into the drivel from the William Penn Foundation funded Delaware Povertykeeper a/k/a Riverkeeper, which was on the rampage against the bill.

It appears the Povertykeeper was also acting in concert with the DRBC, as it had two staffers in Harrisburg yesterday—Stacey Mulholland, its Government Affairs Lead and one other—running from one Representative to another falsely telling them there was no natural gas in the Delaware River basin anyway. More on that in a moment, too, but suffice to say they wouldn’t be there fighting against the bill if the gas wasn’t real. That should be obvious.

The DRBC, of course, will probably say they were just informing members of the House but they were lobbying by any common sense definition of the word and it is nothing less than outrageous. The DRBC is accurately described in the Federal Register as “an agency and instrumentality of the governments of the respective signatory parties (Delaware, New Jersey, Pennsylvania and New York).” That is to say, the DRBC is not only a group to which Pennsylvania belongs but, by virtue of the compact creating it, is also effectively a Pennsylvania agency.

What happened yesterday as DRBC staff lobbied against HB 827, in other words, was akin to a Borough or Township employee coming to a municipal meeting while on the clock, and on the public dime, to lobby against passage of a local ordinance on their personal behalf. We pay Stacey Mulholland and her cohort and they’re in Harrisburg at our expense working against us.

According to the Pennsylvania State Ethics Commission, “The general rule under the Ethics Law is that there is no per se prohibition to serving in two positions provided the two positions are not adverse to each other or there is no statutory or inherent incompatibility.”

Worse, they’re telling fibs. They have been spreading falsehoods to the effect there is no gas in the Delaware River basin. If so, why was the agency including this slide in one of their presentations back in 2010-11 when they were considering adoption of regulations that would permit gas drilling? 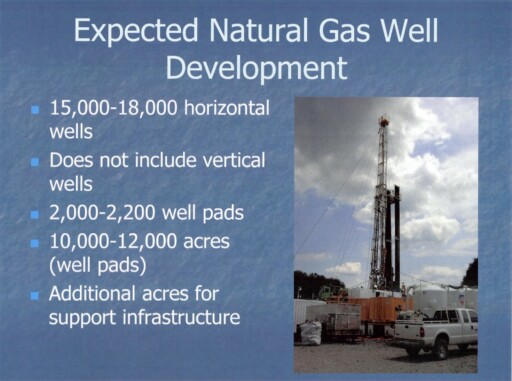 Admittedly, technology has, over the last 8-9 years, advanced to the degree the number of wells and pads would be far fewer (perhaps only 1/8th as many) but the gas to be extracted would also be greater. Are we supposed to now suddenly believe there is no gas? That’s nonsense. And, don’t tell us the gas companies left because they found nothing.

Gas companies left for less restricted opportunities because the DRBC refused to vote on already prepared regulations in 2011, having willingly surrendered to Josh Fox, the Delaware Povertykeeper and other gentry class tools. There is gas. This we know from test well results. How much will require hydraulically fracturing those wells, which the companies were never allowed to do. And, the Delaware Povertykeeper and DRBC wouldn’t be fighting HB 827 if they didn’t think there was gas to develop. One minute they’re screaming about the damage that would be done and the next they’re telling legislators there’s nothing to it. Only a fool would buy those incompatible arguments.

There is, in fact, every reason to believe from the test well results and the geology, that conditions in Northern Wayne County, on the east side of the Lackawanna Syncclinorium (Moosic Mountain) are very similar to those in gas-bountiful Susquehanna County.  Consider this seismic data: 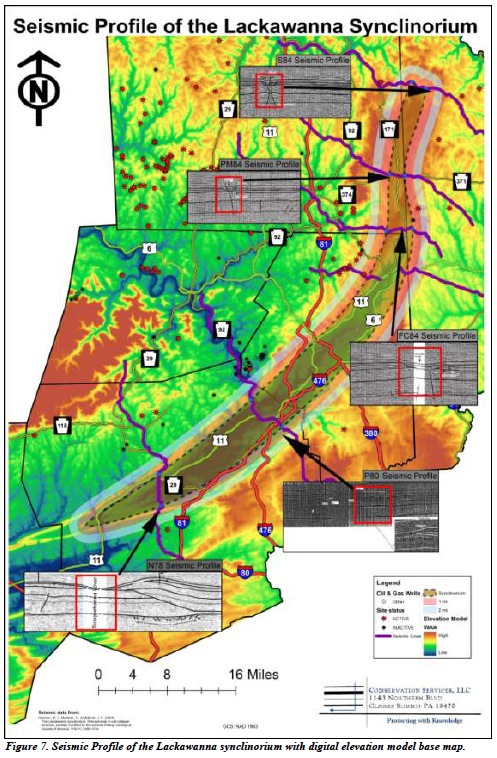 Yes, the DRBC staff is lying for the sake of convenience in lobbying our elected representatives on the DRBC’s behalf even though they’re supposed to be representing all of us. We have an agency that has gone rogue and taken onto itself the role of tyrant. They want our land and they’re saying they will be damned if they’re going to be forced to pay for it. One hopes they will be damned for opposing this basic principle of justice; that resources taken for public benefit must be bought at prices that fairly compensate those from whom it is taken.

We can all do something about this. First, we can get on the phones and thank the 10 Democrats who stood up for fairness. They will be relentlessly targeted by the Povertykeeper and the DRBC. Here they are:

While you’re at it also call the Republican leadership and tell them to demand all Republicans get behind HB 827 on the final vote on Monday. Tell them tax paying Wayne County residents need to know property rights still exist in Pennsylvania and basic fairness is still important. Tell them this injustice and treating of Wayne Countians as second-class citizens must end!

Get on those phones and fight back against rogue DRBC tyranny! Do it now!

I’ll be doing it while simultaneously filing an ethics complaint against the DRBC. Pro bono legal advice will be welcomed.

Here is some of the discussion yesterday to motivate you: