With northeast Pennsylvania already serving as a major national trucking hub for freight distribution, the development of the nearby Marcellus shale revealed a serious gap in the number of certified drivers. Companies like Holcombe Energy Resources and its subsidiary Eastern Freight Systems in Tunkhannock were suddenly finding themselves at the end of the line. 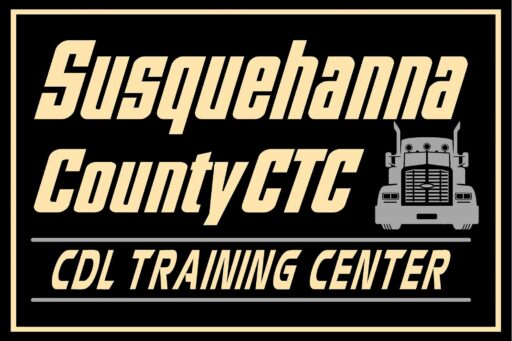 “We were at the back door waiting to get whoever we could,” Matt Austin, manager of both companies, recalled of the challenges he experienced in hiring over the last decade. Hope sprang up on the horizon when the Susquehanna County Career & Technology Center (SCCTC) opened a new CDL Training Center on their campus in Springville. The program was the result of consultation with and contributions from Cabot Oil & Gas Corporation, Meshoppen Stone, GasSearch Drilling Services, and others with a vested interest in taking on more qualified drivers and building a workforce with local people.

“These are jobs that will never be sent overseas,” stated SCCTC executive director Alice Davis. “The need is just going to continue to grow.”

Eastern Freight is the latest company to step up with a major contribution to the school: two 53-foot van trailers available for instruction and practice. Davis is excited that Eastern is more directly involved to the school, noting that Austin is also on the Center’s advisory committee. “Input from employers is invaluable to the instructors,” she noted. “And every time someone donates something to us, we can save the students money.”

The CDL Training Center opened last summer and, Austin related, “We’ve already benefited a lot from it,” having hired several men and women upon their graduation. They receive further on-the-job training with Eastern and Holcombe. It’s during this time, Austin explained, that the new drivers get a better idea of what they want to drive

“Once they get started, they might want to try something different,” he remarked. “We have so many divisions that we can give them those opportunities.”

The new vans are 13’6” high and afford the students an experience beyond what would be needed in the gas fields. “Vans work well for the DOT test,” said Austin. “A 53-foot trailer turns more slowly and gives the driver time to respond. It takes awhile to get used to it as they are turning the wheel.”

The trailers also give the CDL students an edge on those at other training centers, Davis maintained. “Even hooking up or conducting a pre-trip inspection – there’s so much that goes into it that the average person wouldn’t realize. And we want it to be known that we put qualified drivers out there.”

“The things that they can learn at the school are invaluable,” Austin concurred. “The driver has to be the professional. We can only do so much as a company.”

Holcombe, Eastern, Cabot, and Brand Graphic Solutions shared the costs of applying logos to the trailers and the words “Student Driver” on the rear of the vans. Sugar Hollow Service Center of Tunkhannock recently did vehicle maintenance at no cost to the school. “I guess it shows how much CDL drivers are needed,” Davis said of the support.

As the business community becomes more involved with the training center, the school continues to fine tune the curriculum. A new part of the program is making sure that prospective students’ driving records are clear of any fines or infractions before they start classes. Davis never fails to remind students that they must remain drug free.

Eight new students began a new training session on Jan. 4. The normal class size was 12, but fewer students allows for better safe-distancing practices in the classroom. Davis hopes that more students can be accommodated when the pandemic recedes and noted that night classes will resume in the spring when days are longer.

Austin says that Eastern Freight would like to make another donation to the school in the coming year – perhaps a flatbed trailer, water tanker, or a vacuum truck. In the meantime, he is proud to see the trailers on the road, knowing that the student drivers are working toward family-sustaining careers.