[Editor’s Note: Europe has descended into an energy crisis attributable to green energy foolishness that left it vulnerable to Russian blackmail sending electric prices soaring and Biden is following like a lamb to the slaughter.]

Power prices are expected to increase as the price of natural gas—the swing fuel for electric generation—increases to meet domestic and international demand. The Energy Information Administration (EIA) expects the natural gas price at the Henry Hub to average $9 per million Btu in the 4th quarter of 2022 and the residential electricity price to average 14.75 cents per kilowatt-hour in 2022, up 7.5 percent from 2021 and 12.2 percent from 2020.

The U.S. consumer-price index for electricity in August jumped 15.8 percent over the August of last year—the biggest 12-month increase since 1981, according to the U.S. Bureau of Labor Statistics.

Natural gas consumption is expected to set a record in 2022 as competition in the power sector from coal and nuclear has been reduced due to power plant retirements and hydroelectric output in the Western states has been reduced due to drought.  Natural-gas prices have more than doubled this year because of a global supply shortage, which was exacerbated by Russia’s invasion of the Ukraine, and they are expected to remain elevated for months as the fuel is needed this winter for heating and electricity generation. The tight supply market has increased the cost for electric utilities to purchase or generate power—costs that get passed on to customers.

U.S. LNG exporters are shipping record amounts of gas abroad mainly because of supply shortages in Europe, as Russia has not restarted the Nord Stream 1 pipeline that brought natural gas supplies from Russia to Europe. Natural-gas producers, faced with pipeline constraints and Biden’s anti-oil and gas policies are not able to increase production sufficiently to alleviate the price pressure caused by record demand here and abroad.

In New England—a region with limited natural gas pipeline capacity and large volumes of imported liquefied natural gas—the situation is particularly acute. Eversource Energy, a utility company that serves about four million electric and natural-gas customers in Connecticut, Massachusetts and New Hampshire, recently implemented an electricity price increase for customers in New Hampshire. Rates more than doubled from about 10.67 cents to 22.57 cents a kilowatt-hour and will remain at that level through January.

Rate increases are especially steep in New Hampshire because regulations require the company to contract for supplies less frequently than in other states, where price increases are implemented more gradually. Wholesale electricity prices have roughly tripled since 2020, reaching $130 a megawatt hour during periods of peak demand. Since the costs of natural-gas and fuel-oil have also increased, heating homes will be more expensive this winter, regardless which fuel is consumed.  Firewood prices in New England and the Midwest are also shooting higher as fuel and equipment rise steeply in the inflationary economy.

Duke Energy Corp., a North Carolina-based utility company that supplies electricity and natural gas in parts of seven states, recently warned residential customers in Florida, to expect bills to increase by an average of 13 percent starting in January. Fuel costs can account for at least 30 percent of a monthly bill.

In Louisiana, Entergy’s fuel charges soared 91 percent in July over the same month last year, according to the state’s utility regulator and overall bills increased about 38 percent. Entergy recovers fuel costs monthly and consumers can see huge jumps in bills from month to month.

The National Energy Assistance Directors Association expects this winter to be the highest winter heating season in a decade—a 35 percent increase to an average of $1,202 from two seasons ago. According to the agency, around one in six American families are already behind on utility bills.

Once a front runner in the transition to renewable energy, Europe is now in a major energy crisis. With limited LNG import capacity and its supply of natural gas from Russia cut off, Europe is forcibly lowering energy demand and subsidizing its consumption. While its energy rationing measures may lower demand, those measures are not a viable long-term solution.

Europe’s supply shortages of fossil fuels may last for years due to its restrictive green policies and the ongoing conflict with Russia, resulting from its invasion of Ukraine and the resulting sanctions the West placed on Russia. Europe underinvested in fossil fuel energy infrastructure for years, implemented hostile policies to fossil fuels and encouraged a shift towards less reliable renewable energy.

Europe is so desperate that natural gas to oil switching is on the horizon in the generation sector this winter. With soaring natural gas prices and limited supply, European utilities may burn fuel oil, diesel and gasoline instead of natural gas for electricity generation. The price differential is more than $250 per barrel equivalent between Dutch TTF Natural Gas and Brent Oil.

There is an estimated 810,000 barrels of oil equivalent per day of installed oil burning capacity in Europe and Asia that will likely come online before this winter as Asia is similarly affected by higher LNG prices as Europe and has mothballed capacity that can be reactivated.  This, in turn, will affect oil prices, driving them higher. 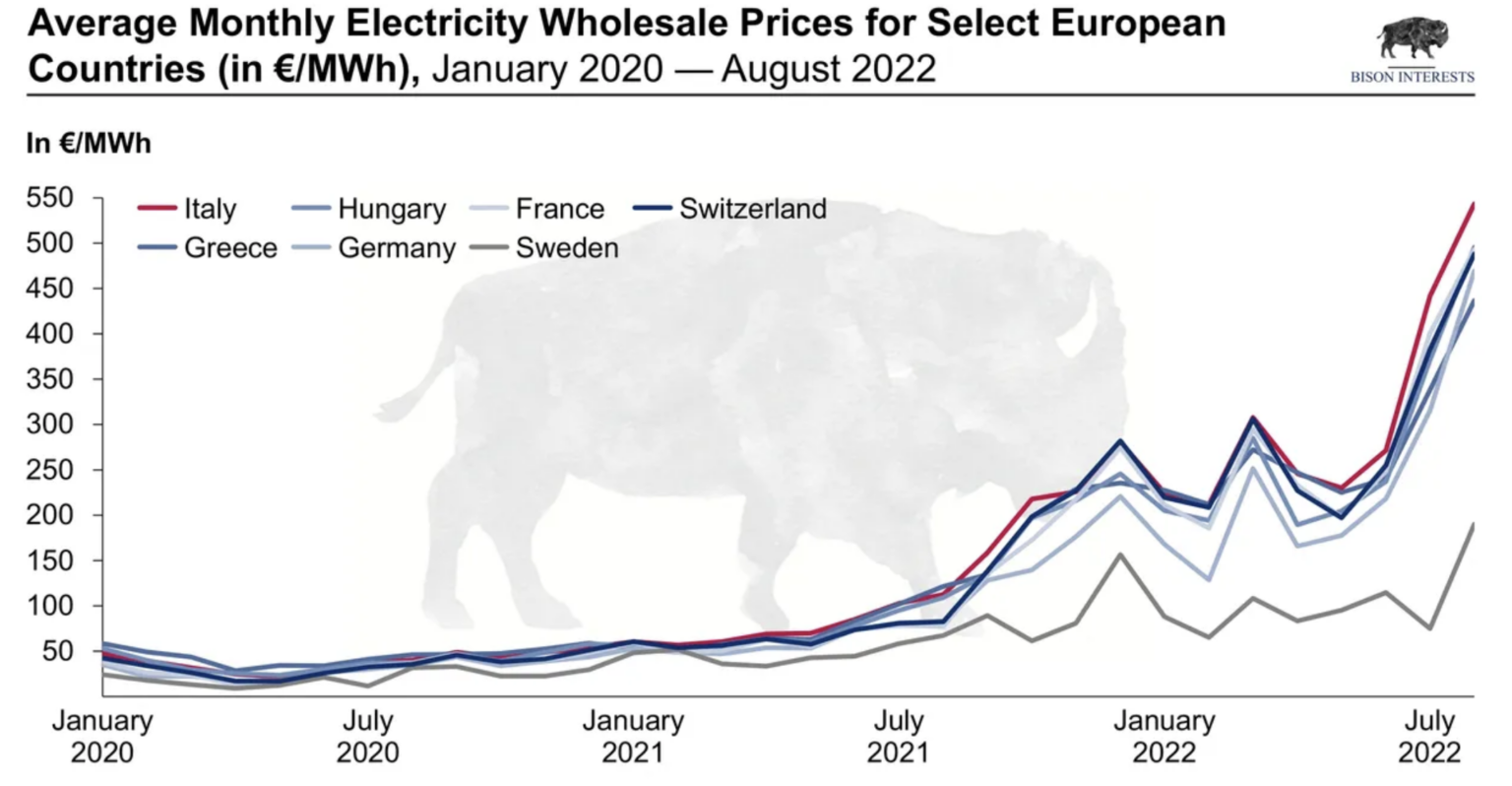 Americans can expect higher electricity prices this winter as utilities will need to use more expensive natural gas to generate electricity due to less available coal and nuclear capacity and less hydroelectric generation caused by a drought in the Western states. Natural gas prices have escalated as producers are having a hard time keeping up with increased demand here and in Europe since Russia cut natural gas supplies to the continent.

While U.S. natural gas prices are a small fraction of those in Europe, they are still double those of a year ago. The tight energy supply situation in Europe is a result of its pro-“green energy” and anti-fossil fuel policies that President Biden is trying to emulate with much apparent success.

If there is a shock to the U.S. energy system from a late-season hurricane in the Gulf of Mexico, a colder than normal winter, or an ice storm in key producing areas, natural gas and electricity prices may escalate even higher causing more Americans to have trouble paying their energy bills. Already, 20 million U.S. households – affecting 60+ million Americans—are behind on their utility bills.