The electricity problems in Texas have been aggravated by a rigged auction system designed to reward inefficiency and promote green scams!

Those blackouts in Texas and Oklahoma have a cause and its the favoritism built into our electricity system; a system that effectively multiplies the subsidies already granted to political correct green energy scams. Electricity grid operators are an integral part of the com. They are creating the green government rent—billions and billions of it—that undergirds the entire green eggs and scam thing. Our friend, Mark Mathis, at the Clear Energy Alliance, has produced yet another powerful video explaining it all.

Here is the video:

As you know, when Mark posts his videos YouTube, he always includes the transcripts, too. Here is the one accompanying the above video, with some emphasis added on the most relevant parts of the story:

Did you know a lot of electricity American’s use comes to them through a series of auctions? Weird, right? Well, brace yourself, because it’s about to get a lot weirder. That’s because the auctions are completely rigged in favor of wind and solar. Worse yet, this auction-rigging means most people pay higher electricity bills. And our electric grid is becoming far less reliable.

You might think I’m exaggerating, but hear me out. Do you think it makes sense for wind and solar companies to offer their electricity at one price, but then automatically get paid a higher price… which raises your bill? And wouldn’t you be concerned to know that when we rely too much on unreliable electricity sources…blackouts are much more likely?

All of this started back in 1999 when the federal government allowed utilities to create Regional Transmission Organizations and Independent System Operators or RTO and ISOs. These organizations conduct daily auctions to buy electricity. They do it for two-thirds of the US population. Donn Dears, explains how the system works in “The Looming Energy Crisis.”

For starters, not all electricity demand is auctioned off. Some of it is pre-sold in long-term contracts. What remains goes into the auctions for RTOs and ISOs The first auction is held to see how much utilities will bid to deliver electricity the following day. The bids are for short segments, as little as five minutes. A second day-of auction is held in order to fill in any gaps that remain.

I know… this is a ridiculously complicated system, but hang with me. Here’s where it gets disturbing, expensive, and dangerous. Because wind and solar companies take advantage of tax credits not available to natural gas, coal, and nuclear, they can always offer the lowest bids, typically less than one cent a kilowatt hour.

Therefore, wind and solar win any bids for power they can deliver for any given time slots at the first auction. The next highest bidder, usually a natural gas utility, sets the price that’s accepted as the supply meets demand.

But get this… After the natural gas utility wins bids at, say, 3 cents a kilowatt hour, the wind and solar providers also get 3 cents an hour, even though their bids were much lower. Crazy, right? Coal, nuclear and some natural gas providers that don’t have long term contracts can only be competitive for time slots in either auction for electricity demand that wind and solar can’t supply.

But why should you care if some coal, natural gas, or nuclear company is financially stressed? Well, because it’s costing you money. Wind and solar aren’t just more expensive, they are unreliable. There must always be a natural gas power plant ready to provide electricity during peak demand. That demand comes late in the day when solar is producing only limited power and wind sometimes produces nothing. Having natural gas as a necessary back up adds additional costs. 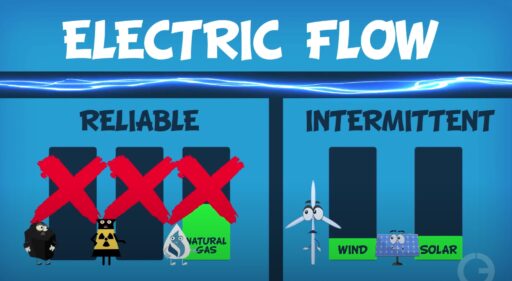 Secondly, as more wind and solar is added to the electric grid, older coal, natural gas, and nuclear power sources that keep the grid stable are forced into early retirement. That’s where the blackouts come in. And, no, we can’t use batteries that store electricity when the sun and wind are producing excess power and then use that juice during the peak.

There are a number of people selling that idea. But we debunk it as magical thinking in our video, Battery Fantasy. The upshot of all of this is that the rigged RTO/ISO auctions are costing you money while setting us up for blackouts across many regions of the country. It’s time for Congress to step in and stop this failed experiment…while we can still keep the lights on.

Thanks, Mark! Power on!