Elitism Threatens to Spark A Revolution Over Energy and Food

Elitism Threatens to Spark A Revolution Over Energy and Food

Elitism is rampant as leaders are increasingly doing the bidding of those who would make serfs of all of us and a revolution is brewing over energy and food!

I am an avid fan of the writings of Aleksandr Solzhenitsyn, who grasped, perhaps better than anyone else,  the inherent  dangers of socialism. He came to his understanding of this evil from both personal experience and his in-depth research on the Russian revolution. “The Red Wheel,” his multi-volume historical novel related to the revolution tells us so much about could lie ahead for us, if the elitism now substituting for republican government is not brought under control and throttled down peacefully. It is nothing less than revolution.

What Solzhenitsyn observed during the years 1914 through 1917 was a slow moving disaster, as Russia’s monarchy and the government that served it failed to address the needs of ordinary Russians and sold its soul to corporatists who manipulated every little thing to their personal advantage, providing an opening for leftist intellectuals who promised to bring it all down and replace it with their own competing utopian schemes, all of which, of course, made themselves the new monarchs. The end result was Lenin, Stalin and three-quarters of a century of horror.

The precipitating crisis that led to the overthrow of the Tsar’s government and the birth of malevolent U.S.S.R. was a food crisis brought on by government control and protection of special interests who manipulated the system; a perverse elitism, if you will, that supposed government knew better and should be the source of favors for those of similar arrogance. Something similar is happening today with respect to both food and energy. Elitism is now the foundation principle of every major institution we used to allot a modicum of trust. Controlling the common man and making a serf of him is the apparent goal of every one of them. Think John Kerry, Think Klaus Schwab. Think Lush.

Lush? Yes, the supremely politically correct and ridiculously trendy cosmetics company that I wrote about here nine years ago, noting the following:

A company appropriately called Lush Cosmetics is funding an anti-fracking campaign in the UK, all the while blithely ignoring the fact its products are hydrocarbon based. Its US operations also help the Rockefeller family fund 350.org…

Lush is one of those hyper-trendy outfits that preaches at you every second about how ethical it is.  No doubt it’s a great marketing tool for reaching customers endeared to this condescending message, but that old line about capitalists being all too willing to sell their hangman the rope with which to hang them comes to mind, doesn’t it?

Lush produces silly stuff that smacks of elitism such as these absurd shower jellies: 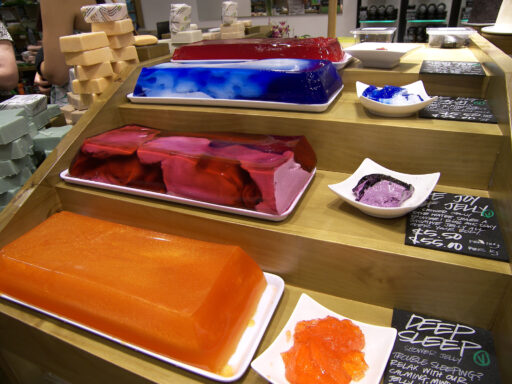 Lush, as it turns out, not only funds 350.org and anti-fracking campaigns (much like Patagonia) aimed straight at its elitist customers, but also funds something called Navdanya International that describes itself as follows (emphasis added):

Navdanya International has been at the forefront of showing connections between multiple crises in the global debate in a holistic perspective, but also connecting movements and actions on the ground. Its international campaigns, convergences and assemblies and advocacy actions have been focused on exploring the context of our food systems and its connections with soil, climate resilience, biodiversity, equity and social justice, with the aim of adding strength to the global mobilization against the industrialization, poisoning and impoverishment of our nutrition and environment, in order to create change at a systems level.

Through its Earth Democracy project, Navdanya International works to promote a new vision for a Planetary Citizenship, an alternative worldview, rooted in caring and compassion for the Earth and Society, where ecological responsibility and economic justice, based on the Law of Return, are central to creating a liveable future for humanity.

You can’t get much more elitist or trendy than that and Navdanya, a year ago, was putting its elitism into practice and bragging about it:

On April 27, 2021, the Sri Lankan government decided to ban importing chemical fertilizers, pesticides and herbicides and to replace them with organic inputs and methods. This decision was supported by many, including the Global Alliance for Organic Districts, who petitioned for the President’s collaboration in order to include Sri Lanka to an international network of local organic districts.  Sri Lanka’s shift towards organic farming was also heavily discussed by both local and foreign researchers and activists. On the 7th and 9th of June, Dr. Vandana Shiva, President of Navdanya International, took part in two online workshops on the Sri Lankan government’s project to go towards organic agriculture and ban agrochemicals….

Dr. Shiva noted that organic farming is not a new method, but that it was a part of the traditional farming techniques in certain countries including Sri Lanka. According to her, Sri Lanka’s shift to become a 100% organic country means turning to an economy of permanence and prosperity for all beings, one that does not destabilise the climate and instead protects all species…

Apart from Dr. Vandana Shiva, other speakers included Andre Leu, director of Regeneration International, Dr. Hans Herren, president of the Millennium Institute, and Dr. Ranil Senanayake, founder of the International Analog Forestry Network. They all endorsed Sri Lanka’s decision, albeit the remark that this huge step forward needs to be implemented according to a plan which ensures a smooth transition for farmers and the local economy. Dr. Shiva said: “The reason I am glad about the approach of the Sri Lankan government is because it connects three things, namely stopping dependency on imports, non-sustainability and the ruination of the ecosystems and of health. The minute we connect sustainability and health, organic becomes the only way we can move forward.”

We are told “Dr.Vandana Shiva is a world-renowned ecological feminist and activist who has campaigned against GMOs, intellectual property rights and free trade. Time magazine named Dr. Shiva an “environmental hero” in 2003.” She comes from a Brahmin family and is a picture of elitism no matter how one cuts it. Nonetheless, of course, she says she speaks for the downtrodden. But, so does every trendy elitist, Prince Charles perhaps being the worst of the lot.

And, what have Dr, Shiva, her Lush-type allies, fractivist funders and supporters wrought after Sri Lanka’s government took her advice? Well,  Reuters told us this in May:

Sri Lanka’s prime minister has warned of a food shortage as the island nation battles a devastating economic crisis and vowed the government will buy enough fertiliser for the next planting season to boost productivity.

A decision in April last year by President Gotabaya Rajapaksa to ban all chemical fertilisers drastically cut yields and although the government has reversed the ban, no substantial imports have yet taken place.

“While there may not be time to obtain fertiliser for this Yala (May-August) season, steps are being taken to ensure adequate stocks for the Maha (September-March) season,” Prime Minister Ranil Wickremesinghe said in a message on Twitter late on Thursday.

“I sincerely urge everyone to accept the gravity of the … situation.”

Sri Lanka is facing a dire shortage of foreign exchange, fuel and medicines, and economic activity has slowed to a crawl.

While many politically correct reports deliberately ignore the impact of going organic at the suggestion of Dr. Shiva and there are, of course, many factors, there is no doubt the collapse of the agricultural economy was the straw that broke the camel’s back, caused food shortages and denied the country the foreign exchange it desperately needed. This was a elitism’s contribution and it proved a disaster not unlike the one at the root of the Russian revolution. Note, too, the energy shortages, brought on no doubt by the nation’s buy-in with respect to solar energy financed partly by us. Elitism had no shortage of solutions for Sri Lanka and they were all bad.

That’s the lesson for us. Joe Biden is wholly captured by the world of elitism, which anti-Western at the core, pro-China and corporatist to the core. He presiding over a determined effort to weaken the United States, destroy its middle class and eliminate the citizenry as a political entity substituting elitist control for anything resembling democracy or republicanism. Everything he’s done so far is akin to what was done in Sri Lanka and in Russia a century ago. Think it can’t happen here? It can. We have the worst ruling class imaginable, as Neil Oliver so aptly explains: