Elitists are feeling the power worldwide and unwittingly stirring a world-wide revolution over energy and food issues as they blithely ignore the citizenry!

The globalist ruling class feels it’s on the cusp of replacing the citizenry of the world with a subservient obedient class of serfs and is not going to be deterred absent an absolute revolution. The revolution, therefore, has approached closer than ever before.

I wrote about this a couple of weeks ago, noting Sri Lanka was experiencing the collapse of its agricultural economy, causing food shortages and, ultimately, a revolution. That revolution was brought about by elitists who determined Sri Lanka needed to stop using fertilizer and shift to organic production to save the planet from climate disaster. And, on top of all that, the nation was in the midst of an energy shortage as well, brought on by Western elitists who, for the same stupid reason, led the country to rely too much on solar energy, yielding a national disaster as the planet went on by itself. I stated “Elitism had no shortage of solutions for Sri Lanka and they were all bad.”

Next, it was the Netherlands. Now, Canada, led by the supremely arrogant, but dumb as a box of rocks, man-child Justin Trudeau, aims to follow suit. 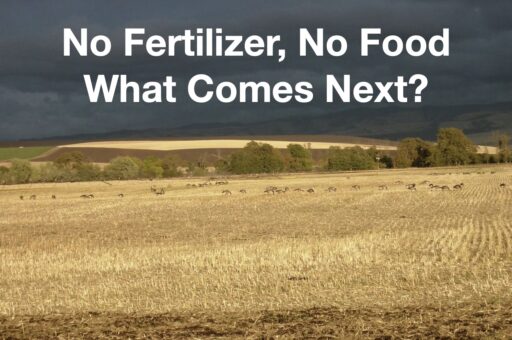 Here’s what’s happening in Canada, where a civil protest of asinine COVID restrictions designed to put truckers out of business got their bank accounts frozen and some of them  jailed for opposing the will of a Prime Minster who thought it was cool to dress up in blackface and has never paid a price for it:

“We’re really concerned with this arbitrary goal,” Saskatchewan Minister of Agriculture David Marit said. “The Trudeau government has apparently moved on from their attack on the oil and gas industry and set their sights on Saskatchewan farmers.”

“This has been the most expensive crop anyone has put in, following a very difficult year on the prairies,” Alberta Minister of Agriculture Nate Horner said. “The world is looking for Canada to increase production and be a solution to global food shortages. The Federal government needs to display that they understand this. They owe it to our producers.”

Fertilizer emissions reduction was not even a topic on the agenda of the annual meeting of Federal-Provincial-Territorial ministers of agriculture, who just finished 3 days of meetings in Saskatchewan. Provinces pushed the federal government to discuss this important topic, but were disappointed to learn that the target is already set. The commitment to future consultations are only to determine how to meet the target that Prime Minister Trudeau and Minister Bibeau have already unilaterally imposed on this industry, not to consult on what is achievable or attainable.

Western Canadian farmers already produce the most sustainable agri-food products in the world, and they’re continually being asked to do more with less. We cannot feed the growing world population with a reduction in fertilizer.

Western Canadian producers base fertilizer inputs on realistic targets based on moisture availability. Producers are conservative in the use of fertilizer inputs and don’t add more than what is needed. They alone simply cannot shoulder the impact of this shortsighted policy.

I would have called out Trudeau as a traitor, card-carrying member of the World Economic Forum and designer of plans to sell off Canada to the Rockefellers. Or, is it Bill Gates? Regardless, it’s a pretty remarkable news release to come out of a provisional government. Perhaps that’s because these officials understand this is pure tyranny of the likes seen in Sri Lanka to great disaster. It seems the Alberta and Saskatchewan folks have suddenly grasped what the whole climate game is all about; further empowering and enriching elitists and, if that means collateral damage in the form of energy and food crises, well, that’s a feature, not a bug.

Yes, elitists such as Trudeau are feeling the power these days. They are unwittingly planting the seeds of revolution worldwide and it’s not likely to end well. That’s because more power allows leads to more corruption until the commoners have had their fill of it and revolt. That’s what’s happened in Sri Lanka over food and energy, is happening in Panama, Ecuador and Malawi and will happen in Canada at some point. No amount of maneuvering by the elitists will save the empires of their dreams when people are without food and energy. Or, their hard-earned savings, as China is learning today with massive protests over banks refusing to allow depositors to withdraw much needed deposits.

What we are seeing is worldwide extreme frustration with the plans elitists have for all of us; plans to exploit global warning and COVID to expand their power, force us into seldom and make us eat bugs instead of beef so they can steal our land. Oil and gas development, which pays royalties and allows us to keep our land stands in the way. Freedom to farm and earn an independent living off the land for which they thirst likewise stands in the way. That’s why they are growing ever more insistent that we move out of the way, as they turn a blind eye to the consequences of their actions, just as the Park Foundation has done in financing the death of New York State’s Southern Tier by denying it fracking.

It cannot and will not go on. The rejection of elitists and their plans has just begun and revolution moves ever closer unless we get responsible leaders who will call out the climate con, call out the corruption and retake civil society before it’s too late. Is it too late already? It would be easy to make that argument but we cannot surrender to it. We must hope and pray for a return to virtue, while we still remember what it was.