Elon, It’s Not Only Freedom of Speech, But Energy Freedom!

Elon, It’s Not Just Freedom of Speech, But Energy Freedom!

[Editor’s Note: Elon Musk seems intent on standing up for freedom of speech and hooray for that, but there’s also the serious matter of energy freedom and the threats to it.]

It is heartening to witness your commitment to protecting freedom of speech in our world. Despite backlash from the far left, you’ve gone ahead and bought Twitter. Like millions, I too greatly admire the pace at which SpaceX has developed and the advanced AI technology that your Tesla runs on.

But this letter is about an issue that is close to my heart, one of life and death for millions in developing parts of the world. It is about energy poverty. 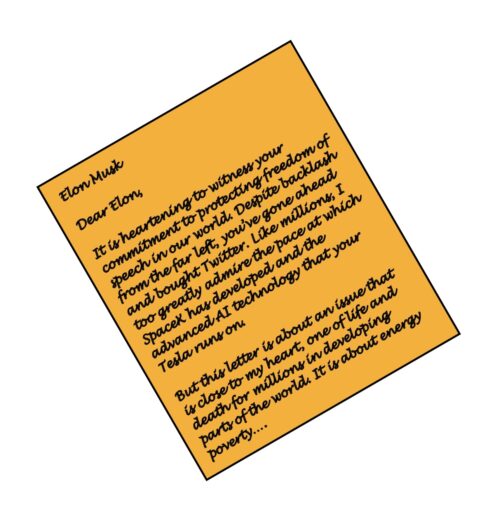 The antithesis to energy poverty is energy security and freedom. You know this. It is precisely why you tweeted on this matter during recent oil and gas shortages. Despite being the maker of the world’s most successful electric vehicles, you pointed out that constraining fossil fuel supplies will hurt people and economies. You could have chosen profit over people, but you did not.

I am making a simple request on behalf of those who live in less-developed countries: Stand for energy freedom, regardless of which fuel source individual countries choose. The world depends on the courage of honest, clear-thinking leaders like you.

Elon, I am writing from a rapidly developing country, India. While you were becoming richer in Silicon Valley, my community and family in Southern India were reeling from frequent and long power blackouts. Factories were being shut, individuals were losing productive hours (which you take seriously), hospitals were unable to perform surgeries, and students could not study at night. People accepted this as their fate life in a third-rate economy.

But two decades of increasing coal use (2000-2020) has ensured that the current generation need not face the same situation that I did decades ago. In 2017, my country of 1.23 billion people finally produced an electricity surplus. The credit goes to the country’s coal sector that powered hundreds of power plants supporting rapidly growing cities and industrial centers.

However, we have a long way to go. Still in desperate poverty are 300 million of my fellow citizens. This is not the right time for the elite of advanced economies to deny India the use of hydrocarbons. The situation is even worse in Africa, with thousands of healthcare centers either electrified partially or not at all. Millions of households remain outside the power grid.

Some propose wind, solar, and batteries as solutions to energy poverty. However, currently available technologies cannot power cities and industries. They are too inefficient and intermittent. Unlike California or Texas or Germany, poorer countries cannot afford failed “green energy” experiments. What might be inconvenience for rich societies is death for the poor. For those who became wealthy with fossil fuels to lecture the Third World about their use is beyond hypocritical.

Energy poverty forces hundreds of millions to use polluting substances like wood and cow dung to cook and to heat homes. With this practice killing millions, the importance of drilling for natural gas cannot be overstated!

A lower-middle income Indian family can afford a gasoline-powered car for $2,500 while the cheapest Tesla Y costs more than $55,000 in the U.S. We do not begrudge those with the means to own EVs, but many of us need gas and diesel for internal combustion engines.

Petrochemicals, of course, are needed for hundreds of essential everyday products.

Yours is an important voice among a growing list of people from Africa and Asia who have called on world leaders to stop coercing less developed economies into adopting unreliable and expensive technologies at a dangerous pace.

So, Elon, standing for freedom of energy is standing for the dreams of millions to have a continuous power supply, to own a car, to enjoy modern health care, to give their children a decent chance for a productive life. In some cases, to have a life at all.

This commentary was first published at Real Clear Energy on May 16, 2022