[Editor’s Note: Our friend, Jackie Stewart, Director of External Affairs for Encino Energy, says the Utica Shale play is even better than expected and the company is investing big in it.]

Encino Acquisition Partners (aka Encino Energy) bought all of Chesapeake Energy’s Ohio assets for $2 billion in 2018 (see Stop Press: Chesapeake Sells ALL of its Ohio Utica Assets for $2B). The deal included all of Chessy’s 933,000 Ohio acres (with 320,000 net Utica acres) and 920 operated and non-operated Ohio Utica wells. The pure-play company continues to actively drill in the Ohio Utica and has become the fourth largest private producer of natural gas and oil in the U.S. (largest oil producer in Ohio). In 2021 Encino hit a milestone–drilling and bringing online its 100th well. What’s ahead in 2022? 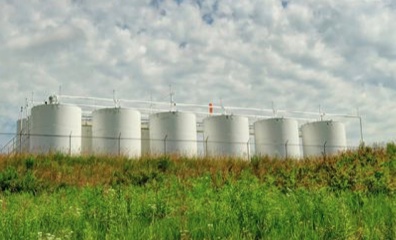 Jackie Stewart, director of external affairs for Encino Energy, recently gave an interview to the Steubenville Herald-Star. She points out not only has the company become an important good citizen in the counties where it drills, it has also contributed millions of dollars to the local economy. Encino has paid more than $50 million in taxes since 2019. In 2021, Encino paid more than $8 million to Harrison, Carroll, and Jefferson counties in ad valorem (i.e. real property) taxes.

Encino Energy is the fourth largest private producer of natural gas and oil in the United States and the largest producer of oil in Ohio. Jackie Stewart, director of external affairs for Encino Energy, recently met with the Herald-Star to discuss operations, the company’s plans for Ohio and to give a 2022 outlook.

The pandemic and historically low commodity prices created serious challenges for the industry, but Stewart said it also created opportunities to grow as a company.

COVID has had a dramatic impact on many in the community. When the pandemic hit, Encino “battened down the hatches, persevered and actually realized tremendous growth,” according to Stewart. Because the company has teams in Ohio and Texas, Encino depended on technology like virtual meetings to find new ways to collaborate while continuing drilling operations. Stewart also credits the pre-COVID work culture at Encino in lessening the shock.

“Encino has been laser-focused on cutting-edge technology since day one, so when the global pandemic occurred, we were well-positioned to work remotely and, in the field,” said Stewart.

At the same time that Encino navigated its way through the beginning of COVID, the company also recognized and responded to critical community needs throughout the region. In Jefferson County, Encino has supported more than 18 organizations and projects during the past three years. For this work, the company was recognized as “The Large Business of the Year” by the Eastern Ohio Development Alliance.

However, Encino’s work in the community did not begin during the pandemic. Since the company’s acquisition of Chesapeake’s Ohio acreage in 2018, Stewart said Encino has been involved in many activities, highlighting its work with townships and through its Encino Community Partnership Program.

“Encino employees and contractors live in Eastern and Southeastern Ohio. Our kids go to schools here and we believe in real, meaningful partnerships to support our communities,” said Stewart. “Equitable broadband access is critically important, and we have spent a lot of time the past two years supporting organizations and directly advocating for it.”

Another area of focus for Encino has been Ohio’s 4-H programs. It’s an initiative that was launched by the company’s Chief Operating Officer Ray Walker, who grew up farming and is the oldest of five children.

“His vision was to ensure that every child who shows an animal through the 4-H livestock program receives a $50 check, in addition to our participation in the auction itself,” said Stewart. The company has been “flooded with thank you letters” from children in Jefferson, Harrison and Carroll counties.

The company also has made meaningful investments into the Jefferson County Emergency Management Agency’s training facility and has consecutively partnered with Urban Mission during the holidays, an effort that Stewart said was “one of the best team-building days of service we’ve had.”

The company highlights charitable work, but the region has seen positive economic benefits as well. Increases in local natural gas and oil development has allowed Encino to support more than $10 million in road improvements. The company has paid more than $50 million in taxes since 2019, and last year, the company paid more than $8 million to Harrison, Carroll and Jefferson counties in ad valorem (or real property) tax.

Tax revenues from natural gas and oil development have resulted in several new schools being built in these counties. For example, Harrison Hills Local School District’s general revenue from property taxes jumped by 56 percent since the beginning shale development in 2011.

Encino believes these benefits from shale development are important to the company’s long-term approach. In 2021, the company put its 100th well into production, which is located in Jefferson County. Now Encino is looking at the future of drilling in the county. The company remains optimistic, but also made it clear that additional critical infrastructure, such as pipelines, compressor and booster stations are needed.

“As an exploration and production company, we produce natural gas and oil but without the critical infrastructure, we can’t sell our product to market,” said Stewart. “We need to go where we have the most economic wells and ability to transport. Pipelines and compressor stations make drilling possible, particularly in the natural gas portion of the Utica Shale.”

Encino’s plans go further than just increasing production. Stewart explained the company has been focused on reducing its environmental footprint. This includes a commitment to less surface disturbance by returning to well pads to drill more wells with longer horizontal laterals through greater efficiencies in drilling and completions technology. Encino has worked closely with the Ohio Department of Natural Resources (ODNR) and Gov. Mike DeWine to establish best practices, modernize drilling and make simultaneous operations possible.

“Reducing our environmental and surface footprint as much as we can is critically important to Encino. We’ve reduced our methane intensity by more than 45 percent, we recycle more than 75 percent of our produced water, and new rules from ODNR allow us to return to existing well pads to produce more natural gas and oil without surface disturbance,” said Stewart.

Encino works with the National Association of Royalty Owners Ohio on this effort, as the new rule benefits landowners as much as companies like Encino. The company also said its commitment to transparency and communication with its landowners has been a “game-changer.”

“The Encino Landowner Newsletter is a great communications tool that we’ve stood up as part of our commitment to transparency,” said Stewart.

“We work very hard to earn the trust of the community and landowners,” said Stewart. She asks anyone who has questions, interests, or concerns to e-mail , call (866) 858-9001 or go to www.encinoenergy.com.

Encino was previously featured in Hart Energy’s Shale magazine as one of the Top 40 US Shale Players. In an interview with the magazine, Encino President and CEO Hardy Murchison highlighted the importance of the Utica Shale.

“We knew the Utica play was underappreciated, but it has turned out better than we expected so far. With the right people, capital and strategy, we’ve effectively turned this asset around,” he said.

Editor’s Note: Jackie Stewart is a long-time friend and the fact Encino Energy chose her as a spokesperson speaks volumes about the company’s competence and its commitment to the Utica Shale project. They could not have chosen anyone better. And, she focuses precisely on the most important thing; that the drilling footprint keeps falling in size.