The global energy crisis that’s forced natural gas prices in Europe to reach stratospheric highs is forcing Germany to reconsider the fracking ban it implemented in 2017, further highlighting the effort from EU nations to boost domestic energy sources, much like the United States has done over the past decade, which has brought incredible domestic and global benefits.

The Russian invasion of Ukraine, the EU’s sanctions in response, and Putin’s retaliatory measures to cut off natural gas supplies to Europe have put Germany in an especially difficult spot, prompting a debate to restart fracking in the country, as The Globe and Mail reports:

“Germany’s energy supply crisis has sparked a national political debate about whether the country should lift its ban on fracking to allow development of untapped natural-gas reserves. As a result of Russia’s war in Ukraine, there is growing concern in Germany that Moscow will completely cut off its gas supplies. Russia has already reduced gas to 20 percent through its Nord Stream 1 pipeline that runs under the Baltic Sea to Germany.” (emphasis added)

With Russia drastically cutting off supply, Germany is moving quickly to deploy LNG import capacity, especially from the United States and Canada, but the country has major reserves which could significantly help meet domestic demand, The Global and Mail observes:

According to a report by the Federal Institute for Geosciences and Natural Resources, the reserves of shale gas in Germany are at more than two trillion cubic meters. Extraction would only be possible through fracking. However, it is unclear whether this volume can be extracted in its entirety. This amount corresponds to 20 times the annual gas consumption in Germany, which is 100 billion cubic meters, according to BVEG. The potential production of shale gas would be up to 10 billion cubic meters per year. That could cover 10 per cent of German gas needs …” (emphasis added)

German politicians were pushed by “Keep It In The Ground” environmental activists to ban fracking in 2017, and now that decision has left the country dangerously exposed ahead of the coming winter. Leaders are taking steps to limit consumption in an attempt to save supplies ahead of colder temperatures. Bloomberg reports:

“Germany’s presidential palace in Berlin is no longer lit at night, the city of Hanover is turning off warm water in the showers of its pools and gyms, and municipalities across the country are preparing heating havens to keep people safe from the cold. And that’s just the beginning of a crisis that will ripple across Europe.”

The drastic measures are being taken because of skyrocketing prices: 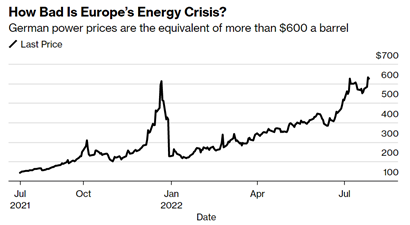 The lack of supply could spell economic catastrophe, Bloomberg notes:

“Rationing and recession are looming for Germany, and authorities have voiced concern about social unrest if the energy shortage spins out of control. … The International Monetary Fund estimates that Germany is at risk of losing 4.8 percent of economic output if Russia halts gas supplies, and the Bundesbank has pegged the potential damage at $225 billion. While it’s sure to be a painful hit, the fear in Germany is that a structural loss in competitiveness will soon follow.”

It’s been a harsh reality check for the country:

“Shortly after Scholz’s government took power in December, dozens of newly-elected politicians in his coalition of Social Democrats, Greens and pro-business Free Democrats had considered talk of Germany’s gas risks a conspiracy theory, but then they saw the facts: reserves at the time would last about 10 days if a cold snap set in.” (emphasis added)

Germany’s energy policies, including a ban on fracking, have left the country in dire straits with skyrocketing prices and a lack of supply ahead of the cold winter months. Now Germany is considering lifting the fracking ban to help boost domestic energy supply and keep its economy afloat.

Finally, it looks like Europe’s largest nation is learning the lessons from the United States, where the shale revolution has unlocked unprecedented natural gas resources that have kept prices low and allowed the country to become the world’s top LNG exporter.