Energy affordability, accessibility, and reliability is color-blind and income-sensitive. Wealthy persons can pay for home generators and drive or fly away from trouble. Poorer people are stuck in their circumstances. For the latter, energy-price setbacks mean budget cuts elsewhere. 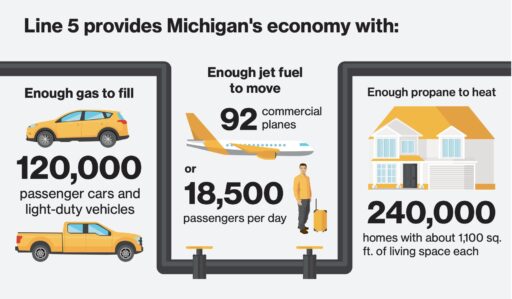 Project 21, “the liberty movement’s only public relations agency for black conservatives and libertarians,” is a project of the free-market think tank National Center for Public Policy Research. [1] Energy affordability is on the menu for Project 21.

But energy for regular folk does not resonate with Nick Cunningham of DeSmog. His “Right-Wing Group Uses ‘B.S.’ Environmental Justice Argument in Effort to Keep an Oil Pipeline Alive” (November 23, 2021) smears Project 21 rather than respond on energy grounds.

A right-wing group that has a history of receiving funding from conservative foundations and ExxonMobil is trying to frame the state of Michigan’s attempts to shut down the aging Line 5 oil pipeline as an assault on the Black community.

That industry-backed spin has not gone down well with Michigan activists. ‘I think that’s B.S. I think it’s phoney baloney,’ Theresa Landrum, a community activist in Detroit, told DeSmog. ‘The Black community is not benefiting. We have been suffering all along.’

Polluting industries are often located near Black, Brown, and Indigenous communities, impacting the health of communities suffering from long standing problems of disenfranchisement and disinvestment. At the same time, these communities are bearing the brunt of the climate crisis, hit hard by extreme heat, floods, and the breakdown of critical infrastructure. And Michigan is no exception, from Flint’s lead pipe crisis, to the urban neighborhoods of Detroit where people breathe toxic air on a daily basis.

And the payoff to the underclass is some hypothetical future change in weather, current energy supplies and prices be damned.

Accelerating the shift away from fossil fuels addresses multiple problems at once by cutting carbon emissions while also reducing environmental and public health threats.

Climate alarmism is at the root of making energy less affordable or unaffordable to the common folk. And less reliable. This is energy elitism at its worst.

[1] Founded in 1982, the National Center for Public Policy Research is a non-partisan, free-market, independent conservative think-tank. Ninety-four percent of its support comes from some 60,000 individuals, less than four percent from foundations and less than two percent from corporations.