Environmental Justice Policy Needs to Be Turned On Its Head!

Environmental Justice Policy Needs to Be Turned On Its Head!

With the official comment period on the proposed new regs now closed, the Pittsburgh Post-Gazette has read through the comments and discovered the new environmental justice policy is universally opposed and panned, by both the environmental left (saying it doesn’t go far enough) and by the shale industry (saying it goes way too far).


No doubt the DEP will make a minor tweak or two of its environmental justice policy based on some of the comments, but overall you can expect this onerous and terrible new policy to become an official regulation of the Commonwealth sometime this summer. Only if the state elects a Republican as governor in November does PA stand a chance of rolling back this woke nonsense.

The state Department of Environmental Protection’s first update to its environmental justice policy in nearly 20 years is drawing rebukes from industry and Republican legislators while prompting environmental and citizens’ groups to call for stronger protections for communities disproportionately burdened by environmental hazards.

The draft policy aims to integrate environmental justice considerations into more aspects of the agency’s work, beyond enhanced public participation opportunities during reviews for some high-impact permits in minority and low-income communities.

The update is expected to take effect this summer after a public comment period that ended earlier this month.

DEP defines environmental justice as “the fair treatment and meaningful involvement of all people regardless of race, color, national origin, or income” in how Pennsylvania develops, implements and enforces its environmental rules and laws.

It is meant to begin correcting decades of decisions that have put an unfair share of polluting facilities in minority neighborhoods, low-income areas and other vulnerable communities.

In comments, environmental and community groups argued DEP will never achieve that goal if it won’t deny permits that meet minimum requirements but still cause environmental justice communities disproportionate harm.

“The ability to speak at a hearing is not ‘meaningful involvement’ if the decision maker will not act on the speaker’s words, and ‘fair treatment’ requires communities to be free from disproportionate environmental risk, not just to be informed of the risks they face,” a coalition of environmental groups led by the Philadelphia-based Clean Air Council wrote.

Several community groups insisted DEP already has the authority under state and federal law to deny some types of permits based on their cumulative or undue impacts on environmental justice communities. They also asked DEP to formalize its environmental justice objectives in a regulation, which has more legal weight than nonbinding policy.

“As drafted, the policy is a largely aspirational statement: It recognizes the need for justice, but seems mostly to hope that justice will somehow be accomplished,” wrote the grassroots advocacy group North Braddock Residents for Our Future.

Industry groups and majorities on the Republican-led state House and Senate environmental committees argued instead that DEP does not have the authority to take even the steps it is proposing in the new policy. They urged the department to withdraw the policy, partially or completely.

Oil and gas trade groups, in particular, objected to shale gas drillers being singled out for a new community engagement process.

DEP has said state law limits how much time it can take to review shale drilling permits, so it designed an alternative outreach process after community members identified it as “a major need.”

In testimony for the Marcellus Shale Coalition, the Robinson-based trade group’s regulatory affairs director Patrick Henderson said the shale public engagement process “is misguided, not authorized by law, fails to meaningfully benefit citizens, and diverts critical DEP staff resources by offering a solution in search of a problem.”

He said the shale industry is “subject to the most comprehensive permit notification requirements of any industry in the state,” so DEP should delete the new shale gas section from the policy and educate the public on current ways to engage.

The Pennsylvania Chamber of Business and Industry and the Pennsylvania Waste Industries Association both warned that DEP risks violating the Constitution’s equal protection clause by varying its enforcement and penalties based on different host communities’ demographics.

Other industry groups, including those representing coal mines, concentrated animal feeding operations, septic system installers, scrap metal recyclers and conventional oil and gas wells, sought to have their permits removed from the list of applications that automatically or optionally trigger the enhanced public participation protocol in environmental justice areas.

In some cases, community and industry groups agreed on the need for more inclusive and better-tailored definitions of environmental justice areas than the state’s current standard.

Since 2004, DEP has defined environmental justice communities as those where at least 20% of residents have incomes below the federal poverty line or 30% identify as a non-white minority. Nearly a third of Pennsylvanians live in such areas.

DEP is working to establish a new and changeable definition later this year based on better demographic data and mapping technology.

It is looking at environmental justice screening tools used by the federal government and California that take into account far more factors than race and poverty, including unemployment rates, English language proficiency, education levels, asthma rates and current levels of air, land and water pollution.

The policy calls for DEP to review and update its maps of environmental justice areas at least every two years.

The draft environmental justice policyregulations may be found here.

Editor’s Note: As we’ve noted many times here before, environmental justice policy is pure hokum; a phony elitist concept designed by rich leftists to deprive poor and moderate income neighborhoods and regions of economic development for the sake of ideology, corporatist grifting and claiming of others’ lands as their own. Patsy McDonnell, Tom Wolf’s sycophant DEP Secretary, has signed onto yet another of the Trust-funder in Chief’s attempts to impress his prep school peers. 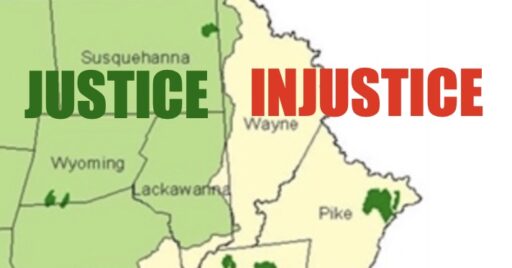 If there were truly any such thing as environmental justice, the uber-rich Haas, Heinz and Rockefeller families wouldn’t be able to tie the DRBC up into knots and prevent the citizens of Delaware County, NY and Wayne County, PA from realizing the same economic benefit from their natural resources as those of Susquehanna County. In fact, if these regulations do get enacted, this abuse and theft of the mineral rights of the poor farmers and landowners of these areas should be the subject of the first complaint filed filed thereunder. That would be true environmental justice justice policy!