EPA Abuse of Authority Must Be Stopped by Supreme Court!

EPA Abuse of Authority Must Be Stopped by Supreme Court!

[Editor’s Note: The EPA is now an unelected, unaccountable force onto its own, taking power over society at every turn and it must be reined in and now by our Supreme Court.]

It is imperative that the Supreme Court stop the regulatory abuses enabled by the gross error of the 2007 ruling in Massachusetts v. EPA. This ruling has been the pretext for a vast extension of regulations by the Environmental Protection Agency (EPA) that were never intended under the U.S. Constitution or the 1970 Clean Air act or authorized by subsequent amendments. 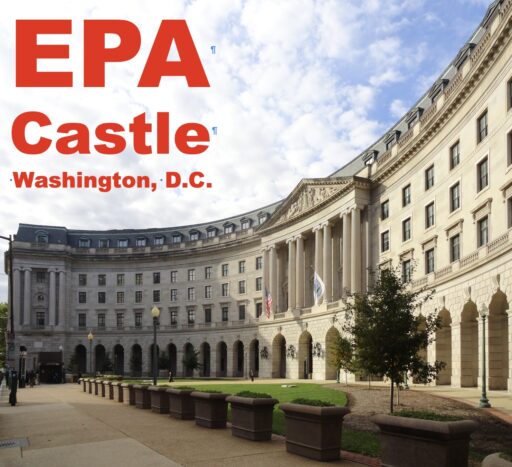 Purporting to be protecting the globe from catastrophic warming, EPA has presumed authority to regulate carbon dioxide as a greenhouse gas. Proposed regulations would control myriad details of our personal and economic lives. These would include the heating of homes, the extent and method of travel, the cost of purchases and the competitiveness of businesses. Government already is picking winners and losers among technologies, industries, and companies. This de facto extension of governmental power is nowhere to be found in the texts of the U.S. Constitution or Clean Air Act — and was clearly not the intent of their authors.

Many proponents of this governmental overreach have promoted the “climate change” hypothesis that global temperatures and extreme weather events are driven by man-made greenhouse gases. Full scientific scrutiny of the theory is resisted with the assertion that it is “settled science.” Theorists refuse to debate or even discuss their scientific basis. In truth, the underlying science is so weak that proponents rightly fear that their theories will not survive examination.

According to data from the last 150 years — the period of the instrumental record for temperature — the earth has warmed about one degree centigrade, the oceans have risen a modest seven inches, and the frequency and strength of extreme weather events have not increased. The alarmists’ rhetoric is mere propaganda.

Even a cursory review of the recent climactic record reveals that the modest and generally beneficial trends in global temperatures and weather patterns are normal and most likely a result of natural cycles. The earth is nearing the end of the 12,000-year Holocene interglacial period, a geologically brief time between spells of extraordinary cold lasting many thousands of years. During this interval, there have been seven periods of average global temperatures that were higher than today’s. Modern global temperatures are neither unusual nor extreme.

Our current mild warming began shortly after the conclusion of the Little Ice Age at the end of the 18thcentury and predates by over 150 years any accelerating use of fossil fuels. One can recall Washington’s crisis at Valley Forge and Napoleon’s troops freezing on their return from Moscow to gain an historical perspective. Soon after these events, today’s warming cycle began and has continued until the recent 20-year pause that began after 1998. Increased atmospheric CO2 could not have caused this recent warming as an effect cannot precede a cause.

Another contradictory and embarrassing fact for global alarmists is the Medieval Warm Period from 1000-1250 AD, when global temperatures were higher than today’s. The Vikings settled Greenland and grapes were grown in northern England. All of this at low levels of atmospheric CO2. Many alarmists have falsely asserted that this period didn’t exist despite thousands of contemporaneous accounts and overwhelming scientific evidence to the contrary.

It is quite evident that the extremely mild warming of the last 150 years has a significant natural component with possibly a slight anthropogenic (man-made) element, but there is no scientific basis for declaring a “climate emergency.” Nonetheless, globalists see this unproven hypothesis as a vehicle to extend governmental control that will necessarily reduce individual freedoms and the impede efficient operation of free markets.

It is quite apparent that EPA’s presumption of authority under the Clean Air Act is resulting in unlawful actions. To facilitate Biden’s “War on Coal,” unwarranted regulations are being rammed through the regulatory process including the Soot Standard, the Power Plant Effluent Standard, Haze Emission Rules, and others. These rules have the intended effect of shutting down many U.S. coal-fired power plants to meet CO2-reduction commitments under the unauthorized Paris Agreement.

It is critical that the Supreme Court curtail the unwarranted extension of the Clean Air Act into the unintended area of “climate change.” If proponents of this dubious hypothesis want to limit CO2 emissions, actions must be justified through new laws that have been proposed, debated, amended, and passed through our democratic process.

Gregg Goodnight is a retired professional chemical engineer and a proud member of the CO2 Coalition residing in Pearland, Texas, his current interests include climate science, the electrical grid, and public policy for energy.

This commentary was first published February 24, 2022 at Real Clear Energy.

Editor’s Note: The EPA regulations are intended not only to kill coal, but all fossil fuels, which is both irrational and immoral. The same arguments used against coal are now being used against natural gas, which illustrates the futility of appeasement.