Last month, the Environmental Protection Agency denied the state of Utah’s request to seek a waiver from the ozone nonattainment list, ignoring key data that shows the majority of the state’s ozone  problems lie outside of the state’s control.

Utah’s waiver, submitted last year by the state’s Department of Air Quality (UDAQ) and known as a 179(b) International Transportation, highlighted that the majority of the ozone pollution comes from either naturally occurring sources or drifts into the state from other states and foreign countries. The waiver application stated:

“Section 179B(b) of the Clean Air Act (CAA) allows a nonattainment area to retrospectively avoid re-classification to a higher nonattainment status if a state can demonstrate that the area would have met the National Ambient Air Quality Standard (NAAQS), but for the influence of pollution emanating from an international source.” (emphasis added)

The data from EPA (the chart below) backs up the waiver request and shows that among the four primary communities that make up the Northern Wasatch Front, more than 70 percent of ozone pollution comes from naturally occurring or man-made sources that originate outside of the United States, another approximate 10 percent comes from naturally occurring sources or wildfires within the country, and another small chunk of man-made sources originates from California, Canada, and New Mexico. 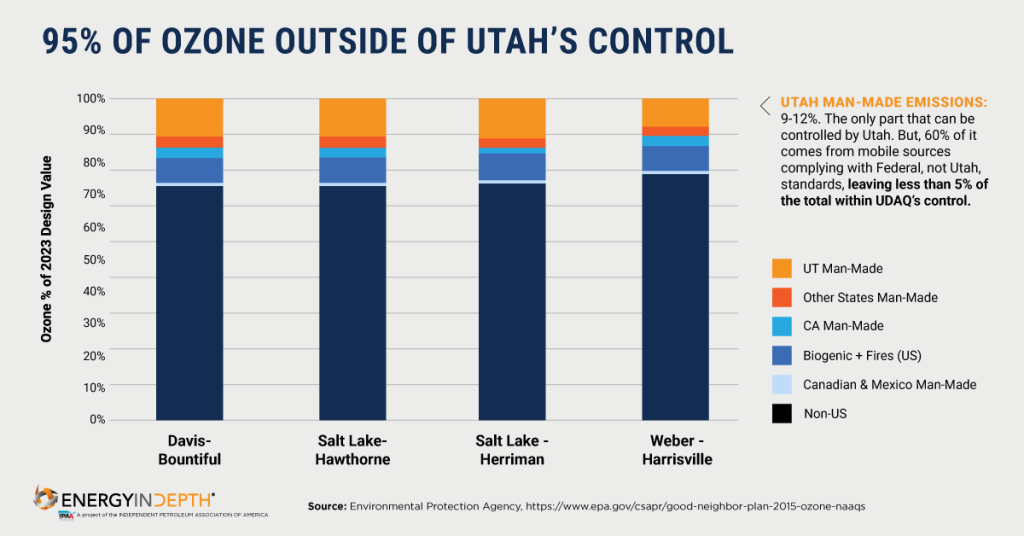 Making matters more difficult for Utah, of that 9 to 12 percent of man-made sources originating within Utah’s borders, 60 percent comes from mobile sources that have to meet federal, not state standards.

That leaves a grand total of only 5 percent of ozone pollution that falls into Utah’s control – meaning that without the 179(b) waiver, it would be practically impossible for the state to ever come into attainment status.

Rikki Hrenko-Browning, the president of the Utah Petroleum Association, submitted the following comment to the EPA about the misguided decision:

“The [Northern Wasatch Front] meets the statutory threshold for a successful 179B demonstration according to the plain language of the CAA.

Energy In Depth has extensively covered ozone issues in Utah and has previously noted that the majority of the pollution is beyond the state’s control, and it’s not just EPA data that supports that conclusion.

In its demonstration, DAQ discussed how naturally occurring sources across the American West combined with the region’s unique topography makes up the majority of the pollution:

“This vertical transport of air from aloft is also enhanced by complex topography by creating winds that enhance O3 mixing down mountain slopes, leading to high altitude locations throughout the western US experiencing greater impacts from intercontinental transport of O3 as compared to lower-elevation locations. This intercontinental transport persists throughout the summer season in Utah, leading to enhancements of local ozone concentrations.”

A study from NASA’s Jet Propulsion Laboratory found that the United States has made tremendous progress but faces its biggest challenges from natural and foreign sources:

“A new study finds that the western United States reduced its production of ozone-forming pollutants by a whopping 21 percent between 2005 and 2010, but ozone in the atmosphere above the region did not drop as expected in response. The reason: a combination of naturally occurring atmospheric processes and pollutants crossing the Pacific Ocean from China.”

Even NPR – citing a study published by scientists in the journal Atmospheric Chemistry and Physics – acknowledges:

“The problem, scientists say, is that Asian countries’ emissions of nitrogen oxides — which sunlight then breaks down in reactions that produce ozone — have tripled since 1990. When those harmful gases circulate to North America, they offset gains in U.S. air quality that have come from cutting nitrogen oxide emissions by 50 percent.”

But even the Tribune had to acknowledge the presence of natural and foreign sources of ozone, plus consumers also contribute to the issue, citing Bryce Byrd, head of DAQ:

“But Bird, who made the comments before the interim committee on Public Utilities, Energy and Technology, said addressing the issue is challenging. Over 80% of the pollution that causes ozone — namely volatile organic compounds and oxides of nitrogen — originate beyond Utah’s borders or emanates from natural sources like sagebrush, pine trees and wildfire smoke, Bird said.

“Only 20% of emissions are from people and originate within Utah, according to the state’s data, and the largest source of those emissions is from vehicles. Restaurants, gas stations, dry cleaners, airplanes and trains also contribute to the problem.”

The Tribune also pointed out that the oil and natural gas sector has made major progress in reducing emissions that lead to ozone:

“The oil refineries spent around $450 million over the last decade on a program that reduced their emissions by 40 percent, Bird added.”