Paul Erlich has received a burst of new undeserved acclaim for being spectacularly wrong on everything. He and Bill McKibben are the original green grifters.

Paul Erlich, the 90-year old prophet of doom who has lived long enough to see most or all of his predictions go down in flames was recently interviewed by the shallow but pompous Scott Pelley of “60 Minutes.” Ironically, by reminding us of Erlich, a bug scientist who made his mark with a 1968 book projecting a “Population Bomb” that turned out to be not just wrong but precisely wrong, Pelley called attention to one of the original green grifters.

Another green grifter of slightly more recent vintage also made the news via a recent article in the New Yorker. I’m talking about Bill McKibben, the Rockefeller toady, who used the article to blamed the rejection of big solar and big wind projects by rural communities on oil and gas companies who are actively misinforming the poor hicks as part of some conspiracy to protect their own turf. That is a double insult to me, of course, as a proud resident of rural America and a proud supporter of natural gas. And, to be doubly insulted by a man who has done nothing by accept money from special interests to promote green energy scams adds a further dimension to the insults.

Erlich and McKibben have both earned reputations as darlings of doom, predicting unrealized disaster after unrealized disaster. Here, in fact, is an all too typical citing of Erlich’s dark projections from the August 13, 1970 edition of the Orlando Sentinel: 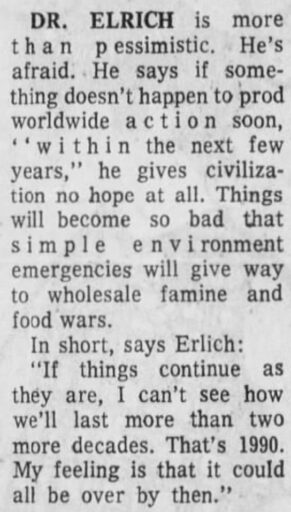 Some 32 years after Erlich said it would all be over, there he was on television predicting it all over again, with the all too credulous Scott Pelley taking it all in with feigned seriousness as if he were interviewing Nostradamus. Watching the two of them play off each other makes one realize, yet again, there is absolutely nothing honest in the way of news to be found on network television. It’s 100% phony and Pelley isn’t about to pull back the curtain to reveal the real wizard because he’s part of the act. It’s an act that has brought fame to both as green grifters.

No one is better at grifting than Bill McKibben, though. His New Yorker article is a complete sham intended to influence the sort of trendy mush for brains souls that feel compelled to read the New Yorker as an internal signal to themselves of their brilliance and the gift to the world they really are. It’s reinforcement of the need for upper classes to stick together to stick it to the common man. Robert Bryce tears McKibben’s article apart here, noting the following:

The gist of his 6,000-word piece is this: Congress has turned a firehose of federal tax credits — which as I reported in The Hill in August will total some $240 billion by 2031 — on the renewable sector. Thanks to this tsunami of cash, wind and solar capacity should grow quickly so those sources can save us from climate change. But McKibben claims there’s a problem: a right-wing conspiracy (funded by the hydrocarbon industry and, of course, the Koch brothers) is stymieing the growth of renewables by infecting the minds of rural Americans and leading them to oppose big renewable projects in their neighborhoods.

To be clear, this is not a new tactic. The wind industry, through its favorite PR firm, Tigercomm, has been promoting this false claim for years. The wind and solar sectors are spending lavishly to push this narrative in the hope that it will help them build more projects, and in doing so, collect billions of dollars courtesy of federal taxpayers. The dollars involved are huge. The American Clean Power Association, formerly known as the American Wind Energy Association, has an annual budget of $40 million. Another big lobby group, the Solar Energy Industries Association, has an annual budget of about $21 million. SEIA is one of Tigercomm’s clients. So is Apex Clean Energy, which saw its proposed 300-megawatt Honey Creek Wind project go down in flames (it lost by a 3 to 1 margin) last month when the project was put before voters in Crawford County, Ohio.

Bryce is not the only one to notice the role of Tigercomm. I reported on it in a detailed 2015 post titled “Tigercomm by the Tail” here:

The name Tigercomm LLC caught my attention. I had just referenced this organization in an article here on Jay Halfon, the Rockefellers’ Rasputin, noting it was one of the recipients of the Rockefeller and Park Foundation money funneled throughout the Sustainable Markets Foundation. Tigercomm LLC, in fact, received $380,717 from the that foundation for fiscal years 2010-2012. What did it do for that money? Well, in 2013 it was “communications,” in 2012 it was “media and advocacy” and in 2011 it was “program media,” so take your pick.

Whatever it did for Jay Halfon, it’s not hard to figure out what Tigercomm is all about: facilitating solar and wind development under the cover of attacking fossil fuels and anything connected with them.

Tigercomm represents a host of solar companies and the American Wind Energy Association, all of which is fine, of course. I’ve often used materials from the latter myself to argue for wind energy potential in certain locales. Moreover, it appears the solar companies represented by Tigercomm are all on the up and up (no Solyndra scams in the mix).

Yet, Tigercomm and, more specifically, Mike Casey, its leader, are deeply involved in the political war against fossil fuels. Is this another Al Gore template, where Tigercomm uses its environmental politics to land economic relationships that enrich it? The company certainly spends a lot of time promoting investment vehicles for solar and wind and even placed one of its own, Brian Mahar, as Senior Communications & Public Affairs Consultant at the U.S. Department of Energy, Loan Programs Office. The whole thing surely has the look and feel of crony capitalism.

Regardless, we know Tigercomm is closely connected to both Tom Steyer and the Rockefeller gang, which certainly accounts for their tactics. One of those tactics is a blog called DeSmogBlog.com, a favorite of fractivists and fossil fuel opponents for its hard-hitting stye, although (actually because) they’re quick with accusations and short on facts. It operates as an attack dog against anyone daring to challenge global warming orthodoxy or environmental purism. It was founded by a guy named Jim Hoggan and John Lefebvre, convicted felon who maintained his own blog within a blog at DeSmogBlog. (Tigercomm seems to have an affinity for convicted felons as it has both John Lefebrve and Jack Abramoff in its stable of associates.)

Tigercomm is closely associated with DeSmogBlog. Mike Casey, for example, is a frequent blogger at the site, with his own bio page. Tigercomm also apparently has DeSmogBlog as a client, though the group doesn’t appear on its client list. Its employee, Serena Connor (), is listed as media contact for this pathetic Fracking the Future report (and for the CEDC). It used widely discredited sources such as Bob Howarth and Earthworks (one of several groups where Rockefeller and trial lawyer Rasputin Jay Halfon helps call the shots – they also include the Park Foundation, funder of Howarth).

Finally, we note the Sustainable Markets Foundation (a Rockefeller creation run by Halfon) also funded DeSmogBlog to the tune of $110,000 in fiscal year 2011, the same year it funded Tigercomm LLC for $123,707 and produced the Fracking for the Future report. Coincidence? Don’t bet on it. This is how business is done among filthy fractivist funders. It isn’t just Tom Steyer playing the game for crony capitalist advantage – it’s also the other usual suspects among the wealthiest of the wealthy who are willing to halt the energy independence march of this country in its tracks and deprive rural Americans of a livelihood for the sake of their own narrow special interests. We have more than a Tigercomm by the tail, we have a nest of vipers to deal with as well.

McKibben, of course, is an integral part the Rockefeller gang even though he is prone to deny it, as I reported here in 2014 and many more times thereafter. He is fully bought and paid for by special interests, another original green grifter in the model of Erlich, more strident and less comically unbelievable, but much more dangerous because of that and the richest of the rich who keep him in their stable. Such is the world we live in today where jackasses are the favorites of media and the tools of our ruling class of elites.