Ersatz Enviros Showcase the Corruption of Our Civil Society

Ersatz Enviros Showcase the Corruption of Our Civil Society

Ersatz enviros, corruption and corporatism are at the heart of everything that is wrong in the West today. Fakery confronts us everywhere we turn.

This story starts with a brownfield site in Chester County, Pennsylvania but it ends in London, England with ersatz enviros at work all along the way. Back in 2017, I wrote a post entitled “The Delaware Riverkeeper’s Personal De-Growth Agenda,” which is about the Delaware Povertykeeper’s role in opposing the redevelopment of a brownfield site in her backyard and using her non-profit for that purpose.

It’s the Bishop Tube site in East Whiteland Township, Chester County, Pennsylvania, where stainless steel tubes were once manufactured. Five years later and counting, the battle rages on with public relations help from the PovertyKeeper’s sister entities at WHHY, StateImpactPA and that whole gentry class funded gang of phonies.

The recent link was brought to my attention by a good friend from down that way who has often noted the PovertyKeeper’s pursuit of the personal causes of those gentry class funders, causes that have zero to do with the Delaware River. These include that bridge replacement big-time supporter and classic trust-funder Bruce Wallace doesn’t want replaced in his backyard. The label of ersatz enviros has certainly applied in that case.

Using non-profits for personal benefit isn’t supposed to happen under IRS rules, of course, and I was intrigued whether or not this was such a case. Is there someone throwing bucks at the PovertyKeeper to fund this campaign against the housing developer, or perhaps the remediation firm? It wouldn’t be the first time the PovertyKeeper may have done the dirty work of a soils remediation firm against one of its competitors, as a Federal judge found in dismissing the case:

While not dispositive to the outcome of the summary judgment motions now pending, the Court does feel compelled to note the factual issues concerning Clean Earth, a Soil Safe competitor. Soil Safe has put forward evidence, some contested and some uncontested, that this lawsuit was spurred on by Andrew Voros, a consultant for Clean Earth. Mr. Voros, who has been paid in excess of $100,000 by Clean Earth (a fact not disputed) to investigate Soil Safe’s operations, took the information he had received about Soil Safe to the Delaware Riverkeeper Network, with whom he has interacted for purposes of pursuing this litigation.

This was based on the following allegations by Soil Safe’s statement of facts presented to the court by its legal counsel (emphasis and admissions added and citations deleted):

46. Mr. Voros testified at his deposition in this case that he began researching Soil Safe’s Logan Township operation as part of his opposition to Soil Safe’s proposed new operation in Carteret (the “Rahway Arch Project”). Admitted

47. Mr. Voros had a prior relationship with Clean Earth that dated back to 1995 with a project called the Bark Camp Demonstration Project (“the Bark Camp Project”). Admitted.

51. Mr. Voros testified at deposition that since 2010 or 2011 he has been paid over $100,000 by Clean Earth in his consultant role investigating Soil Safe’s operations. Admitted.

52. Mr. Voros took the information regarding Soil Safe he had collected for Clean Earth and brought it to the Delaware Riverkeeper Network (“DRN”). Admitted.

53. Through a contact at New Jersey Conservation Foundation, another environmental advocacy group that was working with Mr. Voros to oppose Soil Safe’s Rahway Arch Project, Mr. Voros set up a meeting with DRN. Admitted.

54. At that meeting, which occurred at the West Deptford Public Library in July 2012, Mr. Voros presented to DRN his allegations regarding Soil Safe’s Logan Township operation.  Admitted.

55. On November 6, 2012, in the next written communication between Mr. Voros and DRN following the initial July 2012 meeting, DRN’s Fred Stine wrote in an e-mail that DRN had nothing but “two copies of Soil Safe ‘Overviews’ and ‘Background’ as well as my notes from our West Deptford meeting.”

57. At the next meeting between Mr. Voros and DRN that occurred after the November 6, 2012 e-mail, multiple attorneys were in attendance. According to a post-meeting follow-up e-mail, litigation strategy was a main topic of discussion. Admitted.

58. Subsequently, Mr. Voros had multiple meetings, telephone conferences, and email exchanges with DRN personnel, including DRN in-house counsel Dan Mulvihill who drafted the Complaint and handled the early stages of litigation in the case, as well as DRN’s environmental consultant for this case, Tom McKee. Admitted.

So, did the Delaware PovertyKeeper also receive money directly or indirectly from Clean Earth? Is this the template for PovertyKeeper operations? The judge was obviously disturbed by the possibility. Is this sort of thing that is motivating he PovertyKeeper to spend years and gobs and gobs of some elite’s money to oppose the redevelopment of the Bishop Tubes brownfield?

One has to wonder and I decided to do a little further investigation of the matter. What I found is that the PovertyKeeper has consistently insisted the only right thing was for the site to be sold back to the original Bishop Tubes owners and operators for donation as open space (after remediation) and she keeps insisting remediation plans are inadequate. It’s delay, delay and more delay and, apparently, for the purpose of ensuring that outcome.

But, why would the PovertyKeeper want to involve the polluters again? Who are these companies? One is Whittaker Corporation and the other is Johnson Matthey, a British multinational speciality chemicals company headquartered in London, England. It describes itself as follows:

We’ve been leaders in our field for more than 200 years, applying unrivalled scientific expertise to enable cleaner air, improved health and the more efficient use of our planet’s natural resources.

And now, as the world faces the challenges of climate change and resource scarcity, we have an even bigger role to play. Johnson Matthey will be central in accelerating the big transitions needed in transport, energy, chemicals production and creating a circular economy.

Johnson Matthey’s vision is for a world that’s cleaner and healthier, today and for future generations. And so we are making it our business to help address the four essential transitions the world needs for a sustainable future.

Every page of the Johnson Matthey’s website brags incessantly about its ESG score and its work to single-handily save the planet. All the code words are repeated to assure the reader it’s more concerned about global warming anything else and that everything it does is geared toward ridding the world of fossil fuels. That is until one gets to the fine print in its annual report. That report, too, extols the company’s battle against fossil fuels with multiple statements such as this on the top of page 18:

But, then, on the bottom of page 18, we find Johnson Matthey promoting blue and green hydrogen and noting the company is a leader in the latter (which, of course, is produced from natural gas) and that it needs to scale up production of the blue stuff. It’s on page 42, though, we learn the real truth with this simple chart showing Johnson Matthey is the perfect illustration of what ersatz enviros do in the real world, proving yet again how crucial it is to watch what people do, not what they say: 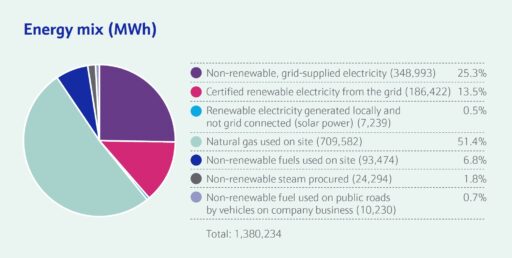 Yes, Johnson Matthey’s more than half of energy needs are met with natural gas the Delaware PovertyKeeper fights at every imaginable opportunity. It appears there are ersatz enviros on both sides of that equation. We see that all the Johnson Matthey ESG talk is merely blather intended to play along with other corporatists and politicians so as to able ride the global warming grifting train, all the while knowing full well natural gas in the only true vehicle for meeting energy needs and reducing emissions of every type.

And, guess what? The Delaware PovertyKeeper knows it, too, and is riding the same sort of train as it uses its non-profit status and reputation as a group of enviros to pursue one special interest after another on behalf of rich trust-funders and others. Indeed, this is the pattern today; no one tells the whole truth and everything is increasingly corrupted. Read, for example, how New Jersey says it will bet its future on off-shore wind, which makes no sense whatsoever, is hopelessly uneconomical and will put the Garden State in the same hopeless position as the UK, which has been forced to drop its fracking ban as a consequence. Or, read how the EU has boxed itself into an energy crisis of massive proportions with the Energiewende and copycats.

What we are seeing is living by lies. Ersatz enviros are everywhere and are but indication of the rot that has infested Western society as special interests craft programs to benefit themselves and the messages that will repeated faithfully by equally corrupted media and government. The only solution, of course, is to live not by lies.