Europe Is in An Energy Crisis, Is Pennsylvania Next?

Governor Wolf could take a lesson from the energy crisis Europe is experiencing, before it is too late for Pennsylvania, and stop pushing replacement of fossil fuels.

I recently read a very interesting article on the ongoing energy crisis in Europe which made many suburb points.  The policies created to transition away from fossil fuels in Europe have caused the cost of electricity to almost double. At the same time demand is also increasing. Unfortunately, for Europe, this problem is not expected to go away anytime soon. 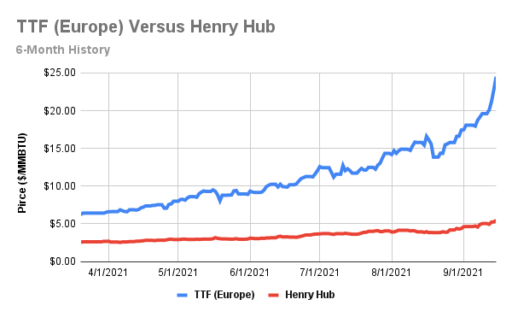 In the United States, states such as Pennsylvania should be paying very close attention to what is happening in Europe. Governor Tom Wolf is pushing the same policies on fossil fuels.  If Wolf is able to pass his agenda, Pennsylvania will be faced with the same expensive, unreliable energy crisis.

The article goes on to say:

“Europe’s experience is the product of foolish energy policy,” says Gordon Tomb, senior fellow for Harrisburg-based Commonwealth Foundation. “Germany, for example, moved away from fossil fuels and nuclear in favor of wind and solar and its electricity now costs twice that of France’s nuclear-generated power.

“Reliability and affordability of the electric system has to be paramount, even as we look at how we’re making this energy transition, which our members are fully engaged in,” Todd Snitchler of Electric Power Supply Association (EPSA) told Delaware Valley Journal. “Europe is not identical to the United States, but it’s constructive that consumers are sensitive to price increases, especially at a time when there is peak demand.”

President Joe Biden and Gov. Tom Wolf (D) have both committed to reducing the use of fossil fuels in order to cut carbon emissions. They see alternative sources like wind and solar as solutions, but critics argue that so-called green technologies are more expensive and less reliable, leaving consumers paying more for electricity that may not be there when needed.

“Pennsylvanians can expect expensive, unreliable energy sources if Gov. Wolf is allowed to force the replacement of economical, readily available coal-and-gas-fired generating plants with solar panels and wind turbines,” says Tomb. “The outcomes of these policies — job losses and damaged lives — is all too predictable.”

“As federal and state policies make energy sources like coal and natural gas more expensive, individuals will pay the price for it,” says Knepper. “That will mean higher electric bills and higher prices for the products they purchase on a regular basis.”

The business community is concerned.

“Energy costs, especially in the manufacturing sector or the industrial sector, is often right behind the cost of your personnel, staff, benefits, salaries,” says Snitchler. “So, when businesses look at how they’re going to plan for the future, they need to know the power is going to be there when they switch their lights on, but it also has to be affordable”

I urge you to read the whole article.

Thank you to Chris Woodard for clearly explaining the energy crisis in Europe and hope for United States to learn from Europe before it is too late.