[Editor’s Note: Europeans are spending more Euros than ever on energy thanks to the foolishness of European energy policies enabling green grifting off consumers and taxpayers.]

Restrictive energy policies have the world staring at an uncertain future. Advanced globally by undemocratic institutions like the United Nations and embraced to varying degrees by numerous national leaders, fanciful but dangerous commitments to eliminate emissions of carbon dioxide are contributing to energy shortages and inflation.

Though the COVID-19 pandemic and the Ukraine-Russia conflict are partly responsible for the current state of global insecurity, an obsessive reaction to a faux climate emergency is the underlying cause. 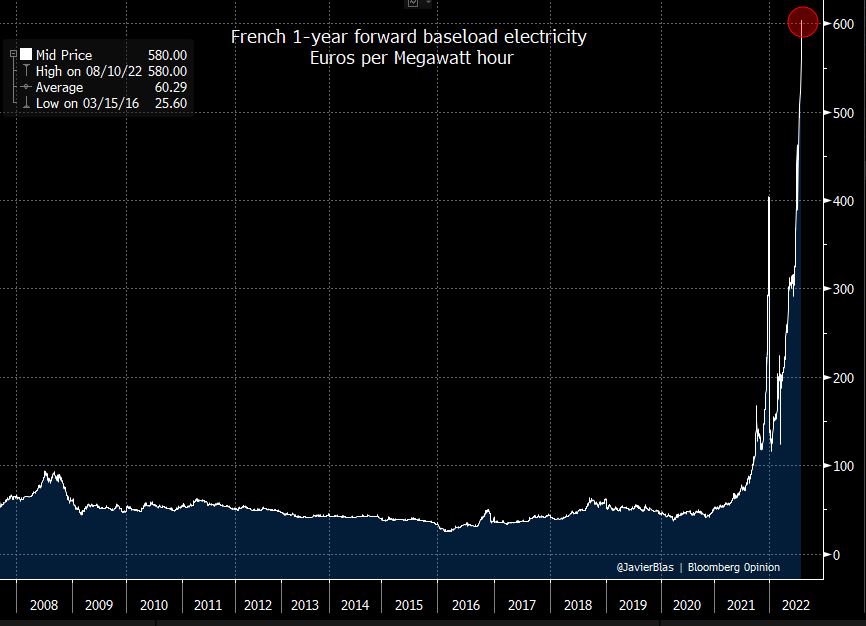 Europeans are now paying a heavy price for the blunders of their climate-woke leaders. On August 11, the French one-year forward price for baseload electricity was 602 Euros per megawatt-hour (MWh), which is more than 1,000 percent above its 2010-2020 decadal average of 45 Euros per MWh. The average for 2021 was just 60 Euros. What we are witnessing in France is an unprecedented and dangerous increase in price with no end in sight.

According to Javier Blas, energy and commodity columnist at Bloomberg, the “French base and peak load prices…are reaching stratospheric levels.” The outlook for winter is bleak. Blas says, “for December, baseload French power is trading above 1,000 euros, almost double German prices, while peak load power — typically in the evenings when families gather for dinner and the heating is on — is changing hands at more than 2,000 euros.”

Germany’s situation is no different either. The prices are rising rapidly, and Berlin seems to be content allowing the market to shift their dependence from gas to oil. But uncertainty still looms as high diesel use may cause a supply crunch.

Skyrocketing prices in Germany and France will spill into the EU energy market, along with an overall energy crunch. France, Germany, and others could have easily averted this situation by not demonizing carbon dioxide, a harmless gas necessary for life.

Now, those once vaunted as green champions are seeming to beg forgiveness from coal plants as one would wishing the return of a spurned lover. In 2018, the French president boasted of his country being coal-free by 2021. By January 2022, the French had restarted coal plants due to an energy shortage. According to france24, the country may use its coal plants in the coming winter as the outlook for energy supplies is bleak.

In July, the European Commission proposed that “all EU countries should cut their gas use from August to March by 15 percent. The target would initially be voluntary but would become mandatory if the Commission declared an emergency.” The call to reduce gas use amid an energy crisis is insane, and even so-called green champions are beginning to realize this. France has opposed the proposal. Others like Germany, Netherlands, and Austria have announced that they will make greater use of coal and gas in the coming months.

But have EU leaders acted too late? The winter of 2022-23 is shaping to be a wake-up call for the world to the foolishness — and dangers — of the climate agenda.

For many in the U.S., the story is similar if not as severe — at least not yet. An American colleague saw his electricity rate increase by 13 percent in July. A far cry from European hikes.

Still, the U.S. has gone from being energy independent in 2019 to being an importer in 2022. The country has some of the largest oil reserves in the world and the potential to access quality oil from neighbors in the north. However, a federal hostility to fossil fuels has resulted in the disruption of domestic oil production and a hiatus in the importation of oil from Canada.

Even with record-high prices at fuel stations, the current U.S. administration refuses to change its position on fossil fuels. Instead of freeing up domestic markets, it has chosen to import oil from OPEC and to pursue more emission-reduction policies.

The bottom line is this: The supposedly climate-friendly policies of politicians will make no difference in the weather and will inflict no small amount of harm on the peoples of the world.

Authored by Vijay Jayaraj  and originally published at American Thinker on 18 August 2022 here. Vijay Jayaraj is a Research Associate at the CO2 Coalition, Arlington, VA, and holds a master’s degree in environmental sciences from the University of East Anglia, UK. He resides in Bengaluru, India.