EVs Are Unethical and No Solution to High Gas Prices

EVs Are Unethical and No Solution to High Gas Prices

[Editor’s Note: It’s time to stop kidding ourselves; EVs are unethical, uneconomical and unsafe. They make no sense and are simply a corporatist gimmick to suck up green rent.]

With numerous State Governor’s having issued executive orders to phase out the purchasing of gasoline driven cars within the next decade or so, and the automobile manufacturers efforts to phase into only manufacturing EVs here’s some food for thought about the lack of transparency about “Clean Energy Exploitations.” 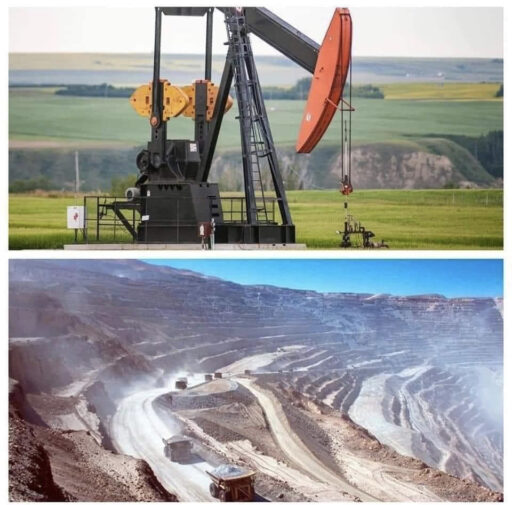 The top image is an oil well, where 100 percent organic material is pumped out of the ground, taking up around 500 to 1,000 square feet. Then it flows in pipelines safely transporting the oil to refineries to be manufactured into usable oil derivatives that are the basis of more than 6,000 products for society, and into transportation fuels needed by the world’s heavy-weight and long-range infrastructures of aviation, merchant ships, cruise ships, and militaries.

The lower image is just one lithium supply mine where entire mountains are eliminated. Each mine usually consists of thirty-five to forty humongous 797 Caterpillar haul trucks along with hundreds of other large equipment. Each 797 uses around half a million gallons of diesel a year. So, with an inventory of just thirty-five the haul trucks alone are using 17.5 million gallons of fuel a year for just one lithium site.

There is virtually non-existing transparency of the environmental degradation and the human rights abuses occurring in developing countries with yellow, brown, and black skinned people.  Both human rights abuses and environmental degradation are directly connected to the mining for the exotic minerals and metals that are required to manufacture wind turbines, solar panels, and EV batteries.

Today, a typical battery for EVs weighs one thousand pounds.  It contains twenty-five pounds of lithium, sixty pounds of nickel, 44 pounds of manganese, 30 pounds cobalt, 200 pounds of copper, and 400 pounds of aluminium, steel, and plastic. Inside are over 6,000 individual lithium-ion cells.

The current fossil fuel infrastructure is less invasive than mining for the exotic minerals and metals required to create the batteries needed to store “green energy”. In developing countries, these mining operations exploit child labor, and are responsible for the most egregious human rights’ violations of vulnerable minority populations. These operations are also directly destroying the planet through environmental degradation.

How many environmentalists are going to support lithium mines in America? There are two things needed to make the technology for EVs work for the billions of lightweight cars:

If you’re worried about rising gas prices, watch this 11- minute video about why to not buy an EV:

So, the next time you are thinking about purchasing an electric vehicle, or driving your EV car, before congratulating yourselves on saving the environment, remember that it came at a cost of entire mountains in developing countries, thousands of square miles of land and billions of gallons of oil and fuel.

We should all know that an electric vehicle battery does not “make” electricity – it only stores electricity produced elsewhere, primarily by coal, uranium, natural gas-powered plants, and occasionally by intermittent breezes and sunshine. So, to say an EV is a zero-emission vehicle is not at all valid as 80 percent of the electricity generated to charge the batteries is from coal, natural gas, and nuclear.

Life without oil is not as simple as you might thinkN, as renewable energy is only intermittent electricity from breezes and sunshine as neither wind turbines nor solar panels can manufacture anything for society. Climate change may impact humanity but being mandated to live without the products manufactured from oil will necessitate lifestyles being mandated back to the horse and buggy days of the 1800’s and could be the greatest threat to civilization’s eight billion residents.

America’s obsession for green electricity to reduce emissions must be ethical and should not thrive off human rights and environmental abuses in the foreign countries providing the exotic minerals and metals to support America’s green passion. Check out the quick 7-minute video interview between yours truly and Rick Amato on “Your America TV” about The Environmental, Social and Governance (ESG) movement to divest in fossil fuels, that may be leading society back to the decarbonized world of the 1800’s and before.

So, before your next vehicle purchase, be knowledgeable that most of the exotic minerals and metals to build EV batteries are being mined in developing countries.

EV buyers should be aware that they may be contributing to the pursuit of “blood minerals” to achieve their efforts to go green. If you feel comfortable supporting the environmental degradation and humanity atrocities occurring in those developing countries, then proceed with your purchase.