[Editor’s Note: California has the 48th worst energy prices of all the states. It is driving Californians away to better pastures. This is the result of green energy policies.]

A new working paper from Stanford University’s Hoover Institution explains that companies are moving their headquarters out of California in droves. The paper discusses several economic factors that are causing these relocations including tax policies, regulatory policies, labor costs, litigation costs, as well as high energy and utility costs. 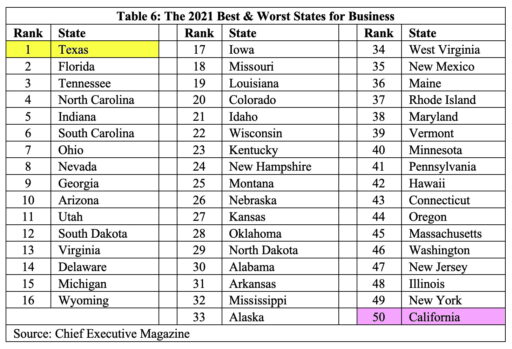 California businesses are migrating with their feet and the contrast with energy friendly Texas couldn’t be more clear!

As the paper explains, the number of companies that are relocating their headquarters out of California is increasing at an alarming rate:

“Our findings indicate 265 companies moved their headquarters to other states just in the period from January 1, 2018, through June 30, 2021, based on the date of the announcement or date of documentation with the state, whichever came first. The losses are accelerating in that such relocations in the first half of 2021, which total 74, exceed that for all of 2020. Every month in 2021, twice as many companies are relocating their headquarters as in the prior year. The half-year monthly average for 2021 also significantly exceeds the monthly averages for 2018 and 2019.”

One of the major factors driving this departure are high energy costs for commercial and industrial operations within the state:

“The U.S. Energy Information Administration identifies California’s energy costs for commercial operations as being quite high. California’s cost per kilowatt-hour (kWh) ranks at No. 48, with only the non-contiguous states of Alaska and Hawaii being more expensive. Industrial rates are relevant because there are times when companies relocate their headquarters and manufacturing plants in unison. Here, again, California ranks quite low, at No. 44, with only New Hampshire, Massachusetts, Connecticut, Rhode Island, Alaska, and Hawaii at No. 50 being more costly for industrial users.”

Moreover, as the paper explains, there doesn’t appear to be hope for lower energy costs anywhere in sight:

“Customers in all parts of California are likely to see energy cost increases by virtually every utility. PG&E Corp. submitted a proposal to regulators for a rate increase totaling $3.6 billion starting in 2023 to help make its system more reliable and safer by sparking fewer fires. PG&E serves a large swath of California from Shasta County near the Oregon border to Santa Barbara County near Los Angeles… Southern California Edison in April 2020 increased its rates by approximately 7 percent overall. In 2021, SCE requested an additional residential rate increase of 14 percent, while commercial rates are estimated to rise between 9 and 11 percent.”

None of this should be surprising to anyone who has been paying attention to California’s energy policies over the past few years. Policy-driven decarbonization of the power grid is causing severe operational and planning issues, adding costs each step of the way. California set its first renewable portfolio standard (RPS) in 2002 and currently requires 60 percent of its generation to come from renewable energy by 2030 with the next 40 percent of generation to come from zero-carbon sources by 2045. As others have noted, renewable portfolio standards raise retail electricity prices and are not a cost effective means of reducing carbon dioxide emissions.

In addition to these aggressive renewable portfolio standards, California is home to a litany of additional energy policies that restrict the use of dense, mineral energies and raise prices for consumers in the process. California is the epicenter of the nation’s bans on new natural gas hookups, which are exacerbating the state’s poverty problem by erecting barriers to entry in some of the country’s wealthiest communities. Furthermore, in the quest to “electrify everything” California’s policymakers are concentrating risks on the electric grid where the confluence of renewable energy mandates and aggressive zero emissions targets have rendered the electric grid unreliable.

In order to curb the production of fossil fuels in the state, California Governor Gavin Newsom recently ordered state agencies to stop issuing new fracking permits by 2024 and to look for ways to phase out oil extraction by 2045. The announcement adds to a list of executive actions that Newsom has taken on climate change in the past year. On September 23, Newsom ordered a ban on new gas-powered vehicle sales starting in 2035. Two weeks later, on October 7, he signed an executive order setting a goal to conserve 30 percent of California’s lands and coastal waters by 2030. All of this means that, to the extent that Californians are allowed to use fossil fuels, consumers will have to rely increasingly on imports from outside the state, likely raising prices in the process.

Finally, California also has the highest gasoline taxes in the country, which have helped raise gasoline prices in the state to their highest point in six years and they are currently the highest in the country. In 2017, the state legislature raised the tax by an additional 20.8 cents a gallon over a three year period. At the start of this year, California drivers were paying on average 63 cents a gallon in state and local taxes, compared with the 50-state average of 36.8 cents.

Together, all of these policies have undermined the ability of Californians to access affordable and reliable energy, which, in turn, is causing businesses to flee the state.