[Editor’s Note: There is a part of society that hates everyone, including themselves, and this segment wants nothing less than the complete extinction of the human species.]

Deep ecology — putting animals and plants equal or ahead of humans — is a dangerous religion. It breeds dangerous anger, social withdrawal, and calls for authoritarian government. And in climate terms, deep ecology has reached the point of premeditated property destruction, such as advocated by Andreas Malm in his book, How to Blow Up a Pipeline (2021). 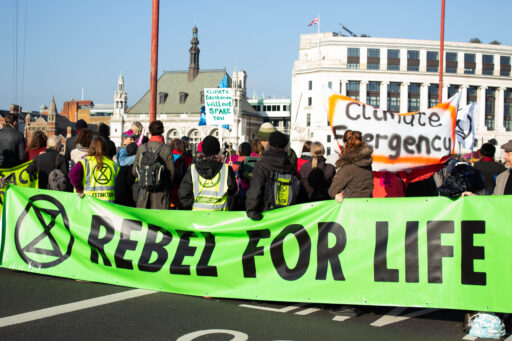 Extinction Rebellion crowd rallies for life they hope to extinguish, blithely unaware of the contradiction in their language!

The dark side of climate alarmism and forced energy transformation is deep and troubling. It rests on the notion of a natural climate that is both optimal and very fragile in the face of human intervention.

“Imagining a low-carbon world, then, means reevaluating our conception of freedom itself,” wrote Audrea Lim in “The Ideology of Fossil Fuels” (Dissent, Spring 2018). The modern energy world of oil, natural gas, and coal, says another deep-ecologist, has created ecocide, akin to the genocide of Germany in World War II.

How about the lowest of the low–a world without human life? This is the plea of one Patricia MacCormack in The Ahuman Manifesto: Activism for the End of the Anthrocene” (Bloomsbury Academic: 2020), a book tha:t

“This book is a delightful provocation and invitation: to imagine a world without humans and to think of what we can do to get there,” says Christine Daigle, Professor of Philosophy, Brock University, Canada. “It is an urgent call for action.”

Wow …. If this is starting to sound like a B Horror Movie, you are a normal person. But all too often the crazies (sorry, but there is not a scholarly term for this) nuts hold academic positions and are funded by private foundations, if not public money. Maybe even a few get MacArthur Genius Awards, doled out by the likes of John Holdren (class of 1981).

Add another nut to the fruitcake. It comes from one Les Knight (as told to Freya Pratty) in The Guardian under the title Experience: I campaign for the Extinction of the Human Race (January 10, 2020).

Knight is founder of Voluntary Human Extinction Movement, which advocates an end to childbearing to rid the wounded planet of its disease. (“With us gone, other species will have a chance to recover,” he says).

His views, and the evolution thereof, are reproduced verbatim:

Fifty years ago, I concluded that the best thing for the planet would be a peaceful phase-out of human existence. We’re causing the extinction of hundreds of thousands of other species. With us gone, I believe ecosystems will be restored and there will be enough of everything. No more fighting over resources. The idea wasn’t as well received as I had hoped.

My journey to advocating for voluntary human extinction began at school. I was born in the post-war baby boom in a small desert town in Oregon, in the US. There were more new students than the elementary school could cope with, so classes overflowed into churches.

In my fourth year, we were taught in the county library; people checked out books as we learned. High school was the same: the cafeteria had to be converted into classrooms. There just weren’t enough resources – a situation that remains the same as we boomers enter our final decades.

After an involuntary stint in the army, I read Paul Ehrlich’s book Population Bomb, which argued that overpopulation would lead to food shortages and famine, and soon joined a movement called Zero Population Growth. Their slogan was Stop at Two, but it didn’t take much maths to work out that this would take too long. We were already overpopulated at 3.7 billion: instead of stopping at two children, we needed to stop at once.

At 25, I wanted to show I was serious. A medical school gave me a discounted vasectomy in exchange for being a student doctor’s first try at the procedure, which was successful.

I became a supply teacher, which gave me plenty of free time to study population issues. In the summers, I hitchhiked around the US, as many thousands did in the 1970s. Everywhere, people told me that their locale used to be so nice before all these people moved in, and it became too crowded. In the late 1980s, I settled in Portland, Oregon, and began to call this concept the Voluntary Human Extinction Movement.

Our message is simple: we encourage people to stop procreating so the biosphere might return to its former glory, and everyone already here will be able to live life more abundantly.

In 1996, when we got a website, things took off. People from all over the world emailed me, saying they had thought they were alone. I got hate mail, too. “You first,” is a common taunt. OK, I got snipped; you next. My favourite encounters are with people who thoroughly question the concept: I’ll take thoughtful disagreement over mindless agreement any day.

I don’t know how many share my beliefs, but I speak to hundreds of advocates each year. We have active volunteers across the world, from India to Mexico. In my own relationships, I’ve always explained that pregnancy is impossible. Marriage never made sense to me anyway: I would have missed getting to know many wonderful women had I stuck with one.

Today, Extinction Rebellion and the climate strike movement haven’t quite embraced the population’s contribution to the crisis. Other high-profile population awareness organisations are working hard to be acceptable, so suggest zero or one offspring, and still say stop at two. Two is too many: computer models suggest even one-child families would result in 5-10 billion people by 2100.

Although the basic concept of the movement is the same, my motivations have evolved. I was a deep ecologist at first, caring more about our impact on the ecosphere than human needs. I’ve become more concerned about any new humans being brought into existence. Procreation today is the moral equivalent of selling berths on a sinking ship.

It’s true that society would be greatly diminished without children, but it isn’t right to create them just because we like having them around. People worry that we won’t have enough workers to support pensioners, but economic systems are artificial and can be adjusted. We don’t need to breed more wage slaves to prop up an obsolete system. If we go extinct, other species will have a chance to recover. I’ll never see the day when there are no humans on the planet, but I can imagine what a magnificent world it would be — provided we go soon enough.

What can be said in response to this humankind-hate? It is a humbling reminder that climate madness is at the center of the deep-ecology movement against modern, high-energy civilization. Expect the eco-nutty to seek-and-destroy persons and property as their ideas are rejected by the world.