Latest facts and a rumor from the Marcellus, Utica, and Permian, Eagle Ford Plays

A deal for Chief Oil & Gas, founded and controlled by Texan ‘wildcatter’ Trevor Rees-Jones, could be announced as soon as this week, the sources said. In wildcat drilling, exploration wells are dug in areas not known to be natural resource fields.

The acquisition by Chesapeake, a U.S. shale gas and oil producer that only emerged from bankruptcy just last year, underscores the recovery of parts of the energy industry as natural resource prices surge to multi-year highs.

The sources, who spoke on condition of anonymity to discuss private information, cautioned that negotiations could still fall apart at the last moment.

A Chief Oil & Gas spokesperson declined to comment. Chesapeake did not immediately respond to a request for comment.

Reuters reported in October that Chief Oil & Gas was up for sale, amid the surge in energy prices that has boosted corporate valuations in the industry.

If completed, it would be the second acquisition which Chesapeake has made since February 2021, when it emerged from one of the largest oil and gas producer bankruptcies of recent years. In November, Chesapeake completed the purchase of Vine Energy for $615 million.

Since exiting Chapter 11 bankruptcy protection, Chesapeake has focused on natural gas production, a return to its roots as a company founded in 1989 by wildcatters Aubrey McClendon and Tom Ward.

Rees-Jones launched Chief Oil & Gas in 1994. The company operates in the Marcellus shale in northeastern Pennsylvania and has around 600,000 net acres, producing more than 1 billion cubic feet per day (bcf/d) of natural gas.

The sale of Chief Oil & Gas would be the latest combination of U.S. natural gas producers in the last few months.

Court Support for MVP.  Court may back Mountain Valley pipeline, despite NEPA fight. Federal appeals court yesterday appeared ready to uphold an approval to extend the controversial Mountain Valley pipeline. During virtual arguments yesterday, a three-judge panel of the U.S. Court of Appeals for the District of Columbia Circuit appeared skeptical of green groups’ claims that energy regulators had failed to take a hard look at the environmental impact of building the Southgate extension connecting the natural gas pipeline to North Carolina. Chief Judge Sri Srinivasan said it wasn’t enough for the groups opposing the project’s Federal Energy Regulatory Commission certificate to argue that they disagreed with the agency’s reasoning.

Baker Hughes 4th Qtr. Results. Shale revival sees orders soar at world’s no. 2 oil contractor. Oil and gas drilling is big business once again, if the leap in demand for services from Baker Hughes Co., the world’s No. 2 oilfield contractor, is any gauge. The Houston-based company posted equipment orders in its fourth-quarter results that were $1 billion above expectations. That led to a 28% jump in demand after years of painful cost-cutting. Shares soared as much as 7.3% to $6.05, the highest in almost three years. The company’s top competitors, Schlumberger and Halliburton Co., are also expected to deliver strong quarterly results when they report over the next several days, in the latest sign that the global oil industry is recovering from pandemic lows.

Record Oil Production in the Permian.  Permian oil output hits record. Crude oil production in the Permian shale play reached a record-high last month, averaging 4.92 million bpd, the Energy Information Administration reported in the latest edition of its Drilling Productivity Report. But the top shale play in the United States is seen boosting output even higher, to 4.996 million bpd this month and 5.076 million bpd in February, the EIA also said. Bloomberg noted in a report on the news that this makes the Permian alone a bigger producer than any OPEC members except Saudi Arabia.

Earthquakes Impact on Producers in Permian.  Permian Basin was hit by a record number of earthquakes last year. What does that mean for oil and gas?  Oil companies operating in West Texas — a thousand miles from the nation’s most active fault lines — are becoming more concerned about earthquakes, which reached a record number last year and are growing ever stronger. The Permian Basin, the 86,000-square-mile oil-rich land stretching from Lubbock to Marfa and San Angelo to Carlsbad, N.M., has no major geographic faults like those that slice the West Coast. But the nation’s most prolific oil field and the cities and towns within it were shaken by almost 2,000 earthquakes last year, a record number for the area.

TX Earthquakes Prompt New Fracking Rules.  Frackers in America’s hottest oil field are facing an expensive new setback: earthquakes. Shale companies in West Texas will have to pay more to move millions of barrels of wastewater that surfaces from oil wells and can aggravate tectonic fault lines when deposited underground. A recent spate of earthquakes prompted state regulators to stop companies from pumping as much water underground, forcing some drillers to move water farther afield.

Eagle Ford Getting Action.  Shale explorers look beyond Permian for oil drilling expansion. Bloomberg. The Eagle Ford Shale in South Texas, long dormant compared to its larger cousin the Permian Basin, saw its biggest one-week jump in drilling activity in more than two years as explorers look for growth beyond the world’s biggest shale patch. The number of rigs drilling for crude in the Eagle Ford rose by 5 to 43 this week, according to Baker Hughes Co. data released Friday. It’s the biggest weekly expansion for explorers in the region since December 2019.

WV Fighting Back Against Banks.  Lawmakers, Moore consider bans. On the heels of the state’s top banker taking action against an investment group pulling its funding from fossil fuel industries, a legislative committee took further actions against banks and investment firms. The West Virginia Senate’s Energy, Industry and Mining Committee recommended Senate Bill 262 in a voice vote Tuesday afternoon, sending the bill to the Senate Finance Committee next. The bill, sponsored by Sen. Rupie Phillips, R-Logan, and supported by State Treasurer Riley Moore, would authorize the State Treasurer to restrict state banking contracts with any bank or investment group that refuses to deal with coal or natural gas companies or terminates contracts with existing fossil fuel companies as a way to punish the companies for engaging in extractive industries.

PA Impact Fees to See Big Increase in 2022.  (Thank you, MDN) Pennsylvania’s Independent Fiscal Office (IFO) provides revenue projections for use in the state budget process along with impartial and timely analysis of fiscal, economic, and budgetary issues to assist PA residents and the General Assembly in their evaluation of policy decisions. The IFO published its Monthly Economic Update yesterday (for October). The update contains good news for PA residents, all of whom benefit from the state’s Act 13 impact “fee” (i.e. tax) on Marcellus drilling. The IFO says the impact fee in 2022 (assessed on drilled and active wells as of 2021) will haul in an extra $74 million (to nearly a quarter of a billion dollars) thanks to the higher average price of the NYMEX futures index.

EQT Gets Certification. EQT Corp. said 80% of its natural gas now holds the certified designation, giving it a potential leg up for premium pricing.

The top natural gas producer in the United States, which produced an estimated 5.6 Bcfe/d during the third quarter, said most of the Marcellus and Utica shale production achieved the certification label last November under standards set by Equitable Origin (EO) and MiQ.

“These results not only enable us to unlock growing domestic and international markets that are valuing a differentiated commodity, they also serve as an important validation of the environmental attributes of Appalachian natural gas,” said EQT CEO Toby Z. Rice.

EQT last April said it was working to ensure most of its Appalachian Basin supply was responsibly sourced. The Pennsylvania-based exploration and production company’s total output “now comprises 4.5% of all-natural gas produced in the U.S.” The certifications “provide a transparent, verified method” to track environmental, social and governance (ESG) commitments. The goals include reducing direct and indirect greenhouse gas emissions (Scope 1 and 2), and reducing EQT’s methane emissions intensity by 65% by 2025.

The EO100 Standard for Responsible Energy Development process focused on the ESG performance, while MiQ verified the methane emissions.

New England Burning Fuel Oil for Electricity.  Where’s the Outrage?  (Thank you, MDN) A few days ago New England generated 24% (a quarter) of the electricity it needs by burning…fuel oil. Why? Low supplies of natural gas. How much electricity was generated by so-called renewables on the same day? According to ISO New England, only 8% of electricity on Jan. 16 was generated by renewables. However, if you take out burning garbage, burning wood, and burning natural gas from landfills (all included in the “renewables” number), just 2.5% of New England’s electricity came from solar and wind, what most people think of as renewable energy. Do you see the folly of dumping fossil energy anytime in the next 50-100 years?

NatGas a “Green Energy” in Europe.  (Thanks, Tom Gellrich for this article) The European Union uses 23 different languages, so coming to a set of common terms is critical. In recognition of this the EU created an official EU taxonomy. Once a term is defined public policy legislation and private industry can work off a common page in all member states.

On the last day of 2021 a draft proposal was issued including nuclear and natural gas as sustainable energy sources. This came about after COP26 Glasgow which requires a 45% reduction in greenhouse gas emissions by 2030. Realizing that renewables would not be able to achieve the 2030 different countries approached the problem from different directions.

No one is happy with the result, but a typical EU fashion compromise resulted in inclusion of both nuclear and natural gas. This has ramifications well beyond the EU, as the EU is considered a climate change leader. 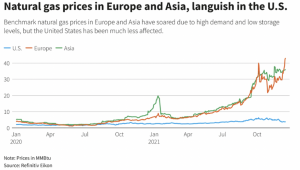 For natural gas this comes at an interesting time, during much of this winter EU natural gas prices have been an order of magnitude higher than in the US. The politically divisive Nord Stream 2 pipeline linking Russian supplies to Germany has not gotten operational approval. With continued Russian aggressions in the Ukraine, Germany will be pressured not to approve Nord Stream 2. Winners will be the major LNG importers, with the US at the head of the line.