Fahrenheit 451: A Free Speech Lesson for Today and Tomorrow

Fahrenheit 451: A Free Speech Lesson for Today and Tomorrow

Fahrenheit 451, science fiction from seven decades ago, tells us so much of what’s happening to free speech on issues such as climate today and we must resist.

Free speech is threatened as never before in the West. Mention anything contrary to the official government line on a variety of subjects, now including global warming, and it’s likely to tagged as misinformation and lead to cancellation.  This collusion between Big Tech and Big Government is akin to book-burning, which was the subject of perhaps the most famous science fiction tale of our lifetime; Fahrenheit 451.

The title comes from the fact paper used in books combusts at the temperature 451 degrees Fahrenheit. It’s all about the role fire departments played in a possible future as imagined by author Ray Bradbury, which mission was not to save homes but to burn them if books were to be found inside. Free thought, of course, was the target of the book-burners and, seven decades later, we’re seeing it all come to pass.  Free speech is being obliterated at the speed of a falling star, in fact, and we have to fight back to save civil society. 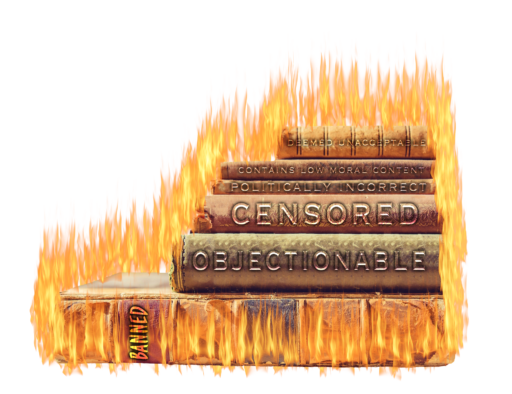 Ray Bradbury, the writer of The Martian Chronicles, had originally titled a short version of his story The Fireman. It’s a 1950s story of a dystopian world ahead where reading books is forbidden to ensure thoughts no longer permitted never erupt in the minds of citizens. Instead, their homes are turned into large scale electronic instruments where approved mindless entertainment appears on the walls of living rooms to draw the occupants into the artificial trances where they can react but are safely prevented from thinking independently.

Today, a better title than Fahrenheit 451 might be Fahrenheit 600 which is the temperature at which the silicone in our mobile phones and laptops melts, but the idea remains the same. Big Tech and Big Media effectively colluded with Big Government to cancel free thought regarding COVID. And, although the truth is now coming out that the lockdowns and vaccine mandates were horrible measures, Field Marshal Klaus Schwab, the wannabe dictator running the World Economic Forum, says “One silver lining of the pandemic is that it has shown how quickly we can make radical changes to our lifestyles.” Acquiescence of the public with lockdowns and the like, in other words, points the way to how global warming propaganda can be forced down our throats.

And, it is. Consider how BlackRock is entwined with government regulators and pushing ESG rules on everyone for its private benefit as elites seek to control everything from what we own, what we eat and, of course, what we think. Which brings us back to Fahrenheit 451, where the digital screens composing three out of four walls pulled residents into seemingly real, but totally theatrical experiences in which they were actors and spectators in phony dramas. Think of it as modern day TikTok where the shallowest of entertainment distracts so many from the slightest of serious thoughts.

The Fahrenheit 451 version of TikTok also relied upon scripts to ensure the viewers who participated in the productions stuck to the government line. It all had the appearance of freedom but, in fact, it was mind control and such freedom as was offered was limited to choosing activity that assured conformance with approved company thought. The entertainment, in fact, was training the citizenry not to think at all but, rather, to surrender to the hallucination in pursuit of a tragically false happiness. Hedonism was effectively sponsored by government to distract from any serious thoughts whatsoever, much as today we are told to reject all morality in favor of endless self-indulgence. Indeed, we’re told not to pursue anything of value. You know; own nothing and be happy,” as the Field Marshal tells us.

Bradbury’s story also included a mechanical hound kept at the fire department for the purposes of tracking those who monitoring revealed to have been reading books; not only tracking but destroying. The mechanical beast could sniff out free-thinkers, follow them at speed of Greyhounds on crack and tear them from limb to limb with hydraulic jaws, sort of the like the jack-booted thugs at the FBI who, with the help of social media and Biden administration “misinformation control board” types, show up your door to investigate if you might have whispered something about elections or, God forbid, attended a protest. If you think they would never restrict your right to disagree with global warming hype, you haven’t been following the escalation of the hyperbole and the way our justice system works today or the way Justin Trudeau went after truckers who opposed his COVID tyranny

Global warming is likely to take us much further into Fahrenheit 451 territory. The level of propagandizing from Big Media, Big Tech, Big Government and Big Business corporatists is is escalating rapidly, despite common sense delivered by the likes of Steve Koonin, an Obama official. the message, moreover, is treated as established fact. Debate and other opinions are simply out of the question. Try any of that and you’re demonized as a “denier” as if we were talking about flat earthers or those who refuse to acknowledge the Holocaust. It’s happened to me. A Pennsylvania State Representative hurled that invective at me in a snarl, in fact. We are not allowed to challenge the global warming faith despite literally decades of failed calamity predictions.

Making it worse is the actual denial of historical facts from the other side as green energy advocates pretend the failure of the Energiewende hasn’t happened and there is no European energy crisis that is not all Vladimir Putin’s fault, when he is merely taking advantage of Germany’s self-created vulnerability. We also see ESG used to put the corporatists in charge of our lives in league with Big Government. It’s all moving ever faster toward a social credit system modeled on China’s and already partially implemented with Justin Trudeau shutting truckers from their own bank accounts because peacefully proposed his COVID vaccine mandates.

So, what can be be done to thwart this horrible Fahrenheit 451 scenario before it’s fully realized? The answer is to be found in the book itself. It’s called resistance of the remnant of those who still believe in free speech and the values surrounding it. get away from Big Tech whenever is possible. Get away from YouTube and Rumble instead, for example. The latter has provided a viable alternative and is on a roll. Communicate in a thousand other ways, in other words. And, make the other live up to their rules by canceling them back, sending illegal aliens to Martha’s Vineyard, and similar tactics. Work with those who may not share all our opinions but agree with us on so much (e.g., Glenn Greenwald, Naomi Wolf). Attend corporate meetings and demand stuff we want for a change. Be the remnant.  Live not by lies, as Solzhenitsyn heroically said.