The Biden wizards have sold out completely to the hedge funders and hustlers peddling green eggs and scam and the result is now a horrific fertilizer crisis.

Today In Energy has another revealing post today identifying a huge problem now facing the world, a fertilizer crisis. This crisis is upon us as a direct result of the Biden administration sellout—lock, stock and barrel—to the corporatist oligarchs who are using global warming hysteria to force the world into a great rest where they can consolidate power and make trillions. The authors of the post don’t say that, of course, as their agency is part of the Biden apparatus but the Energy Information Administration has a good record of just stating the facts, so the conclusion is inescapable and doesn’t require further elucidation. The fertilizer crisis is all about what Biden is doing to rid the world of fossil fuels. 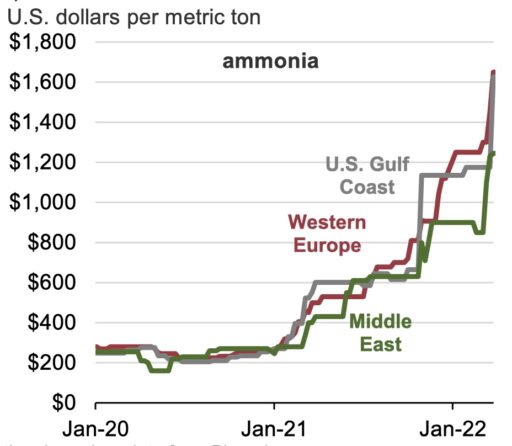 Here, from the post, is the foundation of the fertilizer crisis (emphasis added):

Consumed as both a feedstock and a fuel, natural gas is important for producing nitrogen-based fertilizers. As a feedstock, natural gas, which is primarily methane (CH4), is reduced to carbon and hydrogen in a steam methane reformer. The hydrogen is then purified and combined with nitrogen to make ammonia (NH3), the foundation for all nitrogen-based fertilizers. In 2021, nearly 90% of the ammonia consumed in the United States was for fertilizer production…

The United States Geological Survey (USGS) estimates that in 2021, the United States produced 17 million metric tons (MMmt) of ammonia, behind China (47 MMmt) and Russia (19 MMmt). U.S. ammonia production has nearly doubled since 2012. Consistently low U.S. natural gas prices have contributed to developing new ammonia production capacity and have resulted in restarting ammonia plants that were closed in the early 2000s during a period of high natural gas prices…

Yes, natural gas is what it takes to make fertilizer and natural gas prices are through the roof due to the attack on exploration and development by the hologram that is Joe Biden, the real version likely being in cold storage in the basement from which he supposedly ran his campaign. The Biden wizards have been busily thwarting natural gas production however and wherever they can so as to allow green eggs and scam to appears as a better deal to those ignorant enough to believe the false hype. They have sold out. The result is a fertilizer crisis of supply and price.

The U.S. price of ammonia, the primary source of nitrogen fertilizer, has risen by a factor of six in the past two years, and most of these increases have occurred since March 2021. Ammonia prices generally follow natural gas prices because ammonia is produced primarily from natural gas. U.S. ammonia prices closely follow international ammonia prices because approximately 14% of total U.S. ammonia consumption is met by imports. Generally, prices of commodity chemicals (ammonia) closely correlate with prices of feedstock (natural gas).

The natural gas price this morning is $7.64 per 1,000 cubic feet, which is why we now face a fertilizer crisis. And, because “nitrogen-based fertilizer is essential for producing major crops such as corn and wheat”and “in the United States…is used for nearly all corn acreage to increase yields,” we are on the precipice of a potential food crisis as well, especially in poorer countries but everywhere. The Biden wizards respond with this crap (pun intended):

USAID Administrator Samantha Power said that food shortages…could lead farmers to drop fertilizer in favor of more environmentally friendly options such as manure and compost, a development she said would be a silver lining of the dire situation…

Meanwhile, the “Big Guy” thinks it’s just a matter of throwing subsidy money we don’t have at the problem when the real solution to addressing the fertilizer crisis is as simply as stopping to obstruct natural gas development. We are governed by the worst ruling class ever, with the all-time worst President being stood up before us proclaiming what he neither grasps nor will ever recall to utter absurd nonsense.