Fetterman Exactly the Fractivist We All Suspected He Was

Fetterman Exactly the Fractivist We All Suspected He Was

John Fetterman is a fractivist who says Joe Biden “made the right call”on the Keystone Pipeline and has been a tool of Food & Water Watch in opposing fracking.

A few days ago I put up a post noting what a total phony John Fetterman was, Including a video of him telling MSNBC he thought Joe Biden had “made the right call” in cancelling the Keystone Pipeline on the latter’s first day occupying the White House. I also noted he had previously called fracking an “environmental abomination.” Since then I’ve learned more and it demonstrates beyond any doubt Fetterman is a fractivist, whatever he says now.

This Food & Water Watch petition signature by John Fetterman says it all: 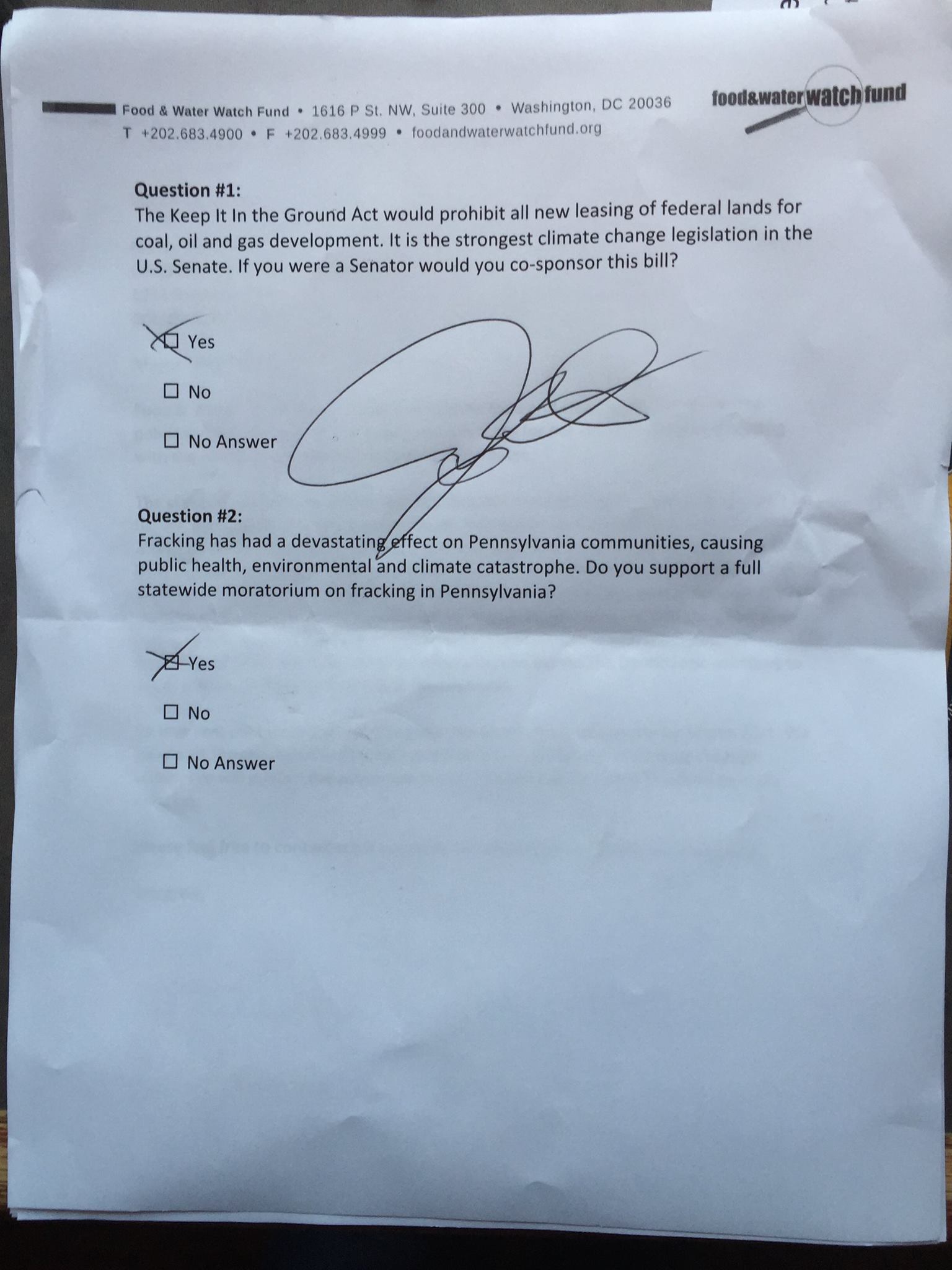 Yes, Fetterman, running unsuccessfully for the Senate in 2016, after a decade of being a meaningless mayor of a tiny Borough in Western Pennsylvania where they made steel with natural gas said “Yes” to this:

Fracking has had a devastating effect on Pennsylvania communities, causing public health, environmental and climate catastrophe. Do you support a full statewide moratorium on fracking in Pennsylvania.

There is no equivocation in that statement or the size of the Fetterman signature. He meant it. And, observe the name of Food & Water Watch Fund appears twice on the form. It is an extremist anti-fracking group funded by the Park Foundation, Tides (associated with Teresa Heinz Kerry) and a whole host of money laundering foundations that take donations from the uber-wealthy and special interests and pass them through as dark money to Food & Water Watch without attribution to the original funder. It is also a profoundly socialist group, as I explained here.

Fetterman, of course, wants us all to believe he has evolved since 2016 and tells us this on his 2022 campaign site (emphasis added):

I believe that climate change is an existential threat, and we need to transition to clean energy as quickly as possible. But we must do it in a way that preserves the union way of life for the thousands of workers currently employed or supported by the natural gas industry in Pennsylvania and the communities where they live. We need to make sure that as we transition we honor and uphold the union way of life for workers across Pennsylvania, and create thousands of good-paying union jobs in clean energy in the process.

In the Senate, I will support legislation that combats high gas prices, invests in upgrading infrastructure, and responsibly transitions us to cleaner energy sources. We must make proper investments in greener, cleaner technology in America — and make more of that technology right here at home. I have never taken a dime from the fossil fuel industry, and I never will. So you can be assured that any vote I take when it comes to energy production and climate will be what I believe is right — not what fossil fuel executives tell me to do.

This is what I’ve been saying for nearly 15 years: I believe that clean energy can revitalize former steel towns all across Pennsylvania, including Braddock, the town I call home. It’s a total false choice that we have to choose between creating jobs and working towards a cleaner environment — we can and must do both.

Notice the clever and deceptive wording. Fetterman never says anything that, in the slightest way, deviates from the petition he signed with a flourish in 2016. He just injects words about jobs, transition and the “union way of life,” of which he personally knows nothing, of course. He still attacks the fossil fuel industry, in fact. Everything is in place for him to later vote against everything natural gas on the basis that he was always talking about green union jobs that must come quickly because climate is just so damned important or some such garbage to rationalize why, like Biden, he’s selling the trades down the river. Indeed, he has supported Biden’s inflation-increasing “Inflation Reduction Act” saying it will “make huge strides in dealing with climate change.”

There is no question; John Fetterman is a fractivist through and through.