Monday, the 28th, was National First Responders Day and Rick Hiduk reflects on the tremendous assistance gas companies have provided for emergency service.

When natural gas exploration began in the Endless Mountains a decade ago, the first thing that first responders noticed – especially those who coordinate emergency vehicles – was an increase in truck traffic. Next came the construction of gas pads and compressor stations in remote places. The potential for an industrial accident and increasing vehicle collisions loomed large for rural fire companies not used to dealing with such situations.

Presidents of fire and ambulance companies throughout Susquehanna and Wyoming counties, as well as their officers, insist that their concerns were not only addressed by gas industry representatives, but that they are now better equipped and better prepared to deal with a variety of emergency situations, including non-industry-related incidents in their respective communities. 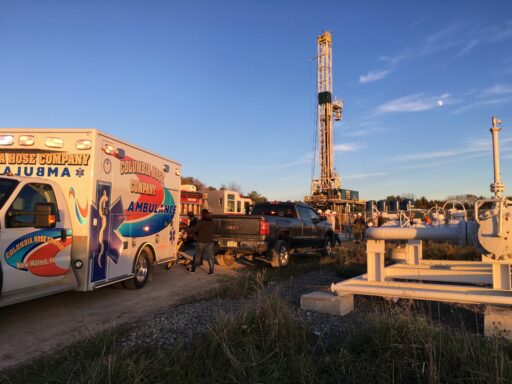 Columbia Hose Company firefighters and personnel from other companies participated in a simulated emergency conducted by Southwestern Energy and Susquehanna County Emergency Management at an active gas pad near Gibson.

“All of this is new to us, and you don’t want to miss anything,” said Columbia Hose Company assistant chief Daniel Totten. In his part of Susquehanna County, operators from Cabot Oil & Gas Corporation, Southwestern Energy (SWN) and Williams Companies cross paths with great frequency. Each, Totten related, has gone out of their way to make sure the fire and ambulance companies have the right gear and that their crews are well-versed in gas field scenarios.

“The water trucks were a major concern,” Hop Bottom Fire Company chief Pete Mecca noted of the early days of the gas industry in northern Pennsylvania. “People around the area were concerned with how it would affect them in getting around on the roads. But, once everything really started flowing, people realized that it wasn’t going to be a major problem.” The gas companies, Mecca maintained, took the lead in mitigating those worries.

“They were very cooperative,” he remarked. When first responders are dealing with any vehicle accident, they have found that they can rely on gas-related operators in their area to reroute tanker traffic. “They gave us their cell phone numbers, and they help with traffic control to make it less congested where we need to work. With fewer (fire company) volunteers, it’s great to have the extra help.”

The assistance first responders get from those in the industry goes far beyond their daily routines, as residents of Nicholson found out when heavy ice on the two creeks that converge in the Wyoming County borough jammed, forcing water out of the banks and coursing through town. SWN is situated most closely to the disaster and responded quickly, but numerous industry partners also played a role in saving the town.

“The manpower that they provided to our fire company that day was invaluable,” Nicholson Fire Company chief Rick Lochen recalled. “SWN’s management said, ‘Drop what you’re doing, get our people into Nicholson.’” The gas company provided pumps, generators and experienced operators and arranged for specialize equipment to come in and punch holes in the thick walls of ice to allow the frigid water to drain from the town.

“They probably had 15 of their men dedicated to us for two days just to help us with manpower,” said Lochen, noting that most of the Nicholson firefighters have day jobs. “Maybe six to eight firefighters were available in that time of crisis.” Most importantly, Lochen noted, for all the personnel, businesses and heavy equipment involved, “SWN worked with the other companies to cover the cost. There was no financial burden to the borough.”

SWN, Cabot and Williams routinely invite groups of first responders to their offices and active sites during periods of construction and completion to acquaint them with their layouts and potential hazards. “Preparation is key,” said SWN company relations manager Mike Narcavage, referring to the coordination of tours of the company’s headquarters on Rt. 92 of firefighters from Nicholson and Factoryville and more concentrated exercises conducted with units from Susquehanna County at an active rig near Gibson and a pipeline in Liberty Township.

“These drills allow SWN, the county EMAs and local first responders an opportunity to test incident command structure as well as educate firefighters to what their roles would be if there is an incident,” Narcavage stated. “It allows us to forge personal relationships so the first time (company managers) and first responders meet won’t be during an emergency situation.”
Pipeline and compressor station construction was part of the logical progression of the natural gas industry for which Williams Companies lead the way, providing the means of getting gas from Cabot and SWN to market. Fire and ambulance units are routinely invited to new sites for extensive tours and explanations of the specific operations.

“The Williams team understands how important it is to work with our first responders to develop good working relationships and role expectations,” Williams safety and health specialist Kate Kamp remarked. “We are proud of the progress we’ve made together in the last 10 years.”

The Columbia Hose Company of New Milford was one of several local units called upon by SWN and county emergency management to participate in a live mock drill.

“They knew what the situation was. We went into it blind. They wanted to see how we would react to it,” Totten recalled of the exercise. The scenario included one man down on a gas pad, a water truck on fire, and an unidentified haze in the air. “Our first instinct is to get to the ‘man down’ and get him out of there. But in a situation like that, you need more awareness,” Totten related, in reference to the unidentified vapor. “That changed our approach and put us in a different mindset.” Collaborating with personnel from the other companies was an important part of the exercise. “It taught teamwork and skills in a situation that could really happen.”

In 2019, the company partnered with BX3 Supply & rental to establish a line of credit so the fire companies could procure what they needed most. Cabot external affairs director George Stark described the annual meetings at which the supplies are distributed, and the presentations given over a catered meal, are part of “the ongoing conversation” between the natural gas companies and first responders. Gas production in the Marcellus shale will continue to increase, Stark related, and those relationships will become even more crucial. “The longer we are here, the more we learn,” Stark maintained.

“It’s fantastic for a company that big to be willing to help these volunteer fire companies,” Lake Carey Volunteer Fire Company fire police captain Colby Yurksza said of Cabot’s outreach. He agreed with other first responders that the most used item so far has been portable, battery-powered LED flood lights that have made cumbersome generators and wires obsolete.
Another blessing to fire companies is the access granted by Cabot to its water withdrawal sites along area waterways, as well as adapters to ensure proper hookups. “It will allow us to get water quickly, whether it is within the department’s coverage area or when assisting as a mutual aid company,” said Meshoppen Fire Company president Travis Prevost.

Most of the fire companies have members who work in the gas fields, which enhances such relationships. Williams Homegrown Grants and Field Giving programs are available for employees to help direct funds into their respective communities for specific purposes, Williams Companies outreach assistant Tammy Bonnice explained. Several employees in Bradford, Susquehanna and Wyoming counties have successfully applied for and received money for their fire companies through the programs.

“Providing financial support is just one component of our commitment to first responders,” said Bonnice. “By working together, we can ensure the appropriate communications and response protocols are in place.”