Fish for the Fallen Gets Gas Industry Support!

Fish for the Fallen Gets Gas Industry Support!

[Editor’s Note: The Northeast Pennsylvania natural gas industry is a supporter of a wonderful program called “Fish for the Fallen” that takes place at Patriots Cove!]

t’s hard to think of a more fitting Memorial Day event than the annual Fish For the Fallen tournament held at Patriots Cove in Wyoming County, Pennsylvania. Seven teams of two anglers each cast their lines into Beaver Run in memory of military personnel and a state trooper who had been killed in action serving their country and communities. Patriots Cove provides recreational opportunities and retreats for veterans and first responders who live with PTSD and other injuries and for their families. 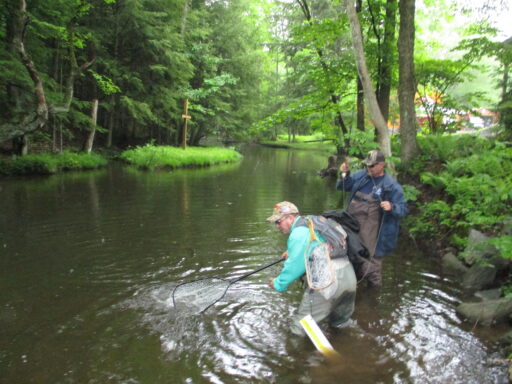 Lodging, meeting and office space, flower beds and miles of trails are the result of thousands of volunteer hours by individuals and those representing companies and corporations like Coterra Energy that support operations there. The quality of the stream has been constantly improved over the last decade and now supports a healthy school of native brook trout, in addition to those stocked by the Pennsylvania Fish & Boat Commission.

We’ve also been a big advocate of Fish For the Fallen each year, providing monetary support that helps with Patriots Cove’s operating costs and sending employees to participate in the tournament. This year, Ed Kozlowski of Coterra and Chad Gorman of GasSearch Drilling Services – a wholly-owned subsidiary of Coterra – fished with mentor and guide Keith Lutz. They were allowed to measure two fish each at each of five stations – or beats – along the stream.

Ed and Chad endured some pretty heavy rain showers in the morning and through their lunch break, but the clouds parted and the sun came out as they wrapped up their afternoon, finishing in third place behind two teams sponsored by our friends at Williams Companies. They fished in memory of Frank Glowiak, a soldier who died in Vietnam in 1966. They carried with them Glowiak’s biography and read something different about him at each stop.

At lunch time, local civic leaders, a color guard contingent, and a trio resembling the Andrews Sisters conducted a ceremony to remember those who had passed away and to share the significance of Patriots Cove. Despite the rain, facility co-founder Jeff Swire said that the outpouring of support from companies like Coterra and Williams is highlighted by the smiles on the faces of tournament participants, many of whom are just getting to know Patriots Cove. “For them to spend a day here and see the level of care that we provide in this beautiful place is a miracle,” he stated. “Quite often, they will visit us again, which is a blessing beyond a blessing.”

The ongoing success of Fish For the Fallen has led to organizers putting a second fishing tournament on the schedule for October that will focus on first responders and law enforcement officials. “This way, we can honor more people,” Swire remarked. “And, with fall foliage at its peak, the Cove will be breathtaking.”