Foreign Agents Funded by the Rockefellers Attack Our Energy Security

The Rockefeller Family Fund is funding foreign agents doing everything they can to undermine the energy security under the guise of fighting global warming.

Our friends at Energy In Depth wisely picked up some news I noticed a few days ago from RealClear Investigations. The latter’s story, found here, is about a British hedge fund billionaire by the name of Chris Hohn, who has been funding Extinction Rebellion and a murky group known as the Center for Climate Integrity, which is behind so much of the #ExxonKnew campaign and global warming hysteria here in our country. It notes the Rockefeller Foundation has a big stake in Hohn’s hedge fund. It is invested in foreign agents, in other words.

Energy In Depth has taken things to another level by establishing that the Rockefeller Family Fund, another part of the spider web of undue influence the family has woven with multiple tax-exempt foundations, has also helped fund the funder by donating to his Center for Climate Integrity. Now, we can take things another step further by adding some additional specifics on those Rockefeller donations.

Here is some of what EID uncovered:

Foreign agents aren’t limiting their meddling to American elections – they’re also propping up the campaign to push American cities and counties to sue energy companies. Chris Hohn, a reclusive British billionaire, is fueling efforts to sue American energy producers, according to a new article by RealClear Investigations. By means of his Children’s Investment Fund Foundation (CIFF), Hohn has directed millions of dollars to the Center for Climate Integrity (CCI), the leading group campaigning to bring litigation against fossil fuel companies for the costs of climate change.

Hohn “thus illustrates the reach of politically driven philanthropy and the potential of wealthy foreigners to sidestep U.S. lobbying laws by using complex financial arrangements,” RealClear Investigations reports. Indeed, CCI has hired a lobbyist to arrange meetings between city officials and the plaintiffs’ attorneys leading these lawsuits while also pursuing an aggressive public relations campaign to promote litigation via billboards, a podcast, social media, events, and media outreach. But, CCI has never disclosed that it is primarily funded by a single foreign billionaire.

Hohn has dedicated a least $16 million to groups advocating for climate litigation in the United States, including $7 million to CCI. As Energy In Depth previously reported, CCI was propped up in 2017 to spearhead a sophisticated public relations campaign pressuring municipalities into suing energy producers. The organization is run by Richard Wiles – a man who also heads the dark-money “news” site Climate Liability News and the #ExxonKnew social media campaign.

CCI is arguably the most active organization fueling the climate litigation campaign today. The organization purchased billboards throughout Miami to pressure the city into suing energy producers, hosted events in cities like Boulder and Honolulu to promote climate litigation against energy companies, and released a study purporting to quantify the cost of climate change in municipalities across the country. The organization has even coordinated with law firms to lobby public officials to bring a lawsuit against energy producers in Florida and submitted an amicus brief in support of ongoing litigation in California.

While CCI remains front and center in the climate litigation campaign, its powerful network of funders is obscured as the organization refuses to disclose them. What we do know about their funding comes from the RealClear’s investigation of CIFF’s grants and a statement by Wiles to The Tampa Bay Times, which revealed that the Rockefeller Family Fund (RFF) –  an organization at the heart of the climate litigation campaign – helped fund CCI’s study on climate costs. RFF has failed to publicly disclose its itemized donations since 2013.

CIFF’s $7 million grant to CCI in May 2018 represents an enormous influx of money to an initiative that was created less than a year prior as a project of the Institute for Governance and Sustainable Development (IGSD).

A review of IGSD’s Form 990 for the fiscal year ending June 30, 2018, reveals that grants to IGSD have skyrocketed in recent years. The organization received just under $4 million in grants during their fiscal year ending June 30, 2016. Just two years later, their revenue from grants more than doubled to nearly $10 million. In that context, CIFF’s grant constitutes a large proportion of IGSD’s funding, potentially representing the single largest source of funding for the organization.

In everything CCI has done to promote climate litigation – its podcast, newsletter, websites, report, advertising, amicus briefs, events, and arranged lobbying meetings – the initiative and its affiliates have never disclosed that they were acting on behalf of a foreign agent.

Despite aggressive action to influence the debate over what to do about climate change in the United States, Hohn has circumvented U.S. lobbying disclosure laws. The Foreign Agents Registration Act (FARA) requires people and organizations “attempting to influence U.S. public opinion, policy, and laws” to make public disclosures about the nature of their activities and their financial contribution in support of their efforts within the United States. While Hohn is trying to influence American discourse around climate change, neither Hohn, his hedge funds and CIFF, nor Richard Wiles are currently registered under FARA.

EID‘s excellent rundown on the foreign agents at work here at home undermining our energy security speaks for itself. I bolded one line, though, because there is more information. The Rockefeller Family Fund, in fact, does detail its donations on a separate schedule, the latest (2017) version of which may be found here. What it shows is this: 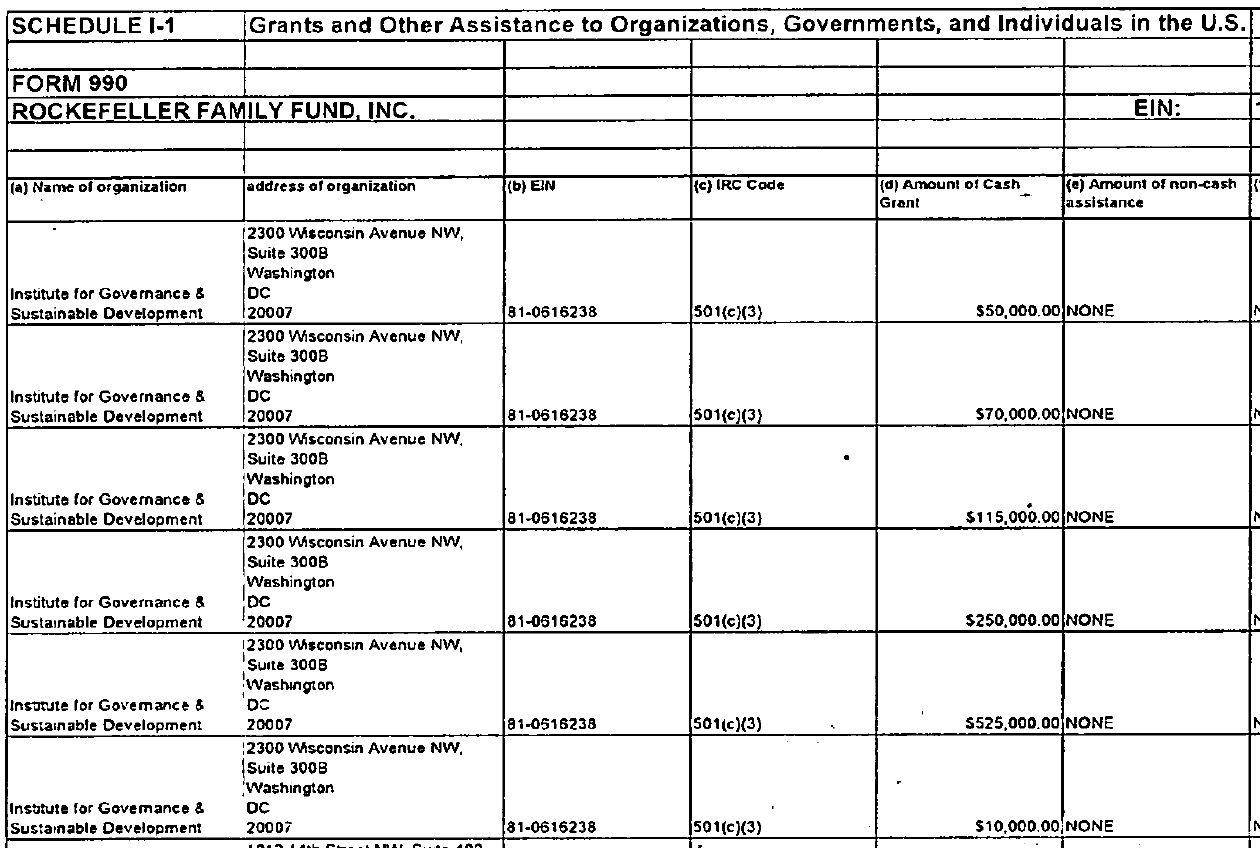 That’s $1,120,000 donated by the Rockefellers, in just one year, to the group behind the Center for Environmental Integrity, which is really a tool of foreign agents targeting our energy security, while another branch of the family is invested in their principal funder’s hedge fund. That’s the nature of this web of special interests involved here and we already know the Rockefellers are invested in China. Is the hedge fund?

We don’t know, but what we do know is that Chris Hohn makes his money ($1 million per day of it) through his investment company, TCI Fund Management Ltd. (“TCI”), which manages his Children’s Investment Fund Foundation and Children’s Investment Fund itself. TCI is invested in coal-hauling railroads and solar investor Google (Alphabet), among other things. And, the Children’s Investment Fund is domiciled in the Cayman Islands where all dark money goes. The enterprise, as a whole, is a complex scheme intended to advance special financial interests threatened by oil and gas, which is more economical than green energy and requires no government rent or subsidies. 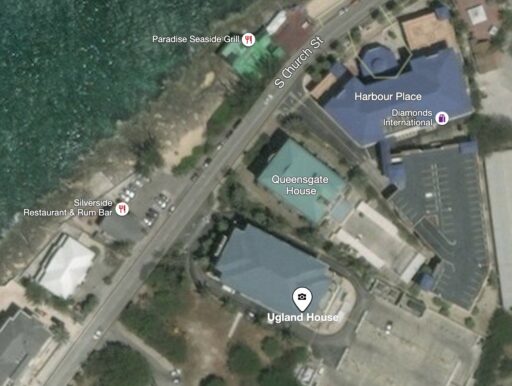 Per Bing Maps: “Ugland House is a building located in George Town, Cayman Islands. Located at 121 South Church Street, the building is occupied by the law firm Maples and Calder and is the registered office address for 40,000 entities, including many major investment funds, international joint ventures and capital market issuers.” It is also the address of the Children’s Investment Fund.

So, the picture becomes a bit clearer when you follow the money. Foreign agents are intent on disrupting our energy security for the sake of earning big returns on investments in things other than those which have given us that energy security courtesy of the shale revolution. It’s less about the charity and the children than earning that $1 million per day.