[Editor’s Note: Joe Biden is an absolutely complete and total failure and nothing proves it so well as the fact gasoline prices are now double what they were under Trump!]

Both oil and gasoline prices increased after each and every time President Biden announced the release of oil from the Strategic Petroleum Reserve. Biden clearly does not understand the oil industry, as his actions have resulted in price increases rather than the decreases he predicted. He continually blames the increases on everyone else but his administration is following his own executive orders.

By now, it would seem he would realize that he needs expertise from someone knowledgeable about the industry, but instead he seems to relish throwing up his hands and telling the American public that he is doing all he can. He clearly is not, because all he needs to do is start reversing the executive orders he put in place beginning day one of his Presidency that have attacked the oil and gas industry.

As shown by the graph below, oil prices have more than doubled since Biden took over the Presidency. They have pretty steadily increased.

Gasoline prices are 52 percent higher than they were a year ago, but almost double what they were when Biden took office. While he likes to blame the high prices on the Russian invasion of Ukraine, the unused leases that the oil companies rent on federal land, and a myriad of other excuses, the truth of the matter is that he campaigned on ending oil and gas drilling and he and his administration are working toward that goal without regard to the American people and their needs.

Besides that, he keeps promising American oil and gas to Europe in their time of need but does nothing to increase oil and gas production at home. Oil and gas exploration and production is expensive and no company is going to invest those funds if the policies from the Presidency are anti-oil and gas. 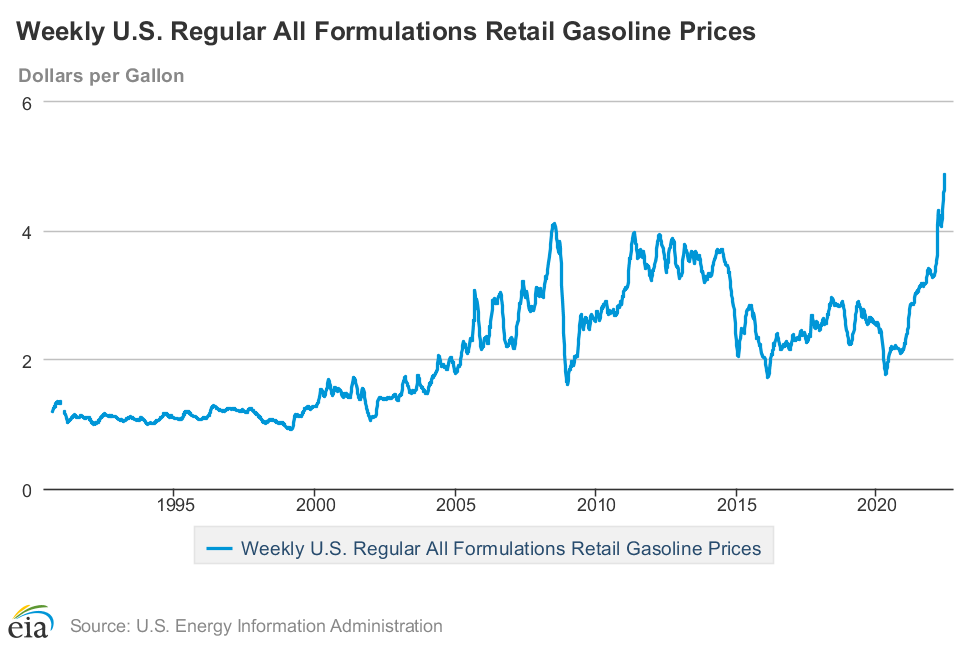 On November 23, 2021, Biden announced that the Department of Energy would accelerate the congressionally-mandated SPR release of 18 million barrels of oil and release an additional 32 million barrels. He said other nations including China, India, Japan, South Korea and the U.K. also agreed to release oil from their strategic reserves. At that time, the oil price was $76.75 a barrel and the gasoline price was $3.40 per gallon—43 percent higher than when Biden took office.

On March 1, 2022, Biden announced a second SPR release of 30 million barrels that was in conjunction with 30 other International Energy Agency member nations. Together the global release was to total 60-million-barrels. The oil price was $95.72 a barrel on February 28 and increased to $103.41 per barrel on March 1 and $123.70 a barrel on March 8—the highest oil price since the 2008 recession.

The average price of gasoline increased from $3.61 a gallon on February 28 to $4.10 per gallon a week later—72 percent higher than when Biden took office. According to the Energy Information Administration, the gasoline price has not dipped below $4 a gallon since the March 1 release.

On March 31, 2022, Biden announced the largest release to date, ordering the Department of Energy to release 180 million barrels of oil from the SPR between April and September. Biden predicted it would lower gasoline prices by 10 to 35 cents per gallon. The price of oil was $107.82 a barrel on March 30 and while it dropped a bit on March 31, remaining around $100 per barrel through April, it increased to $114.20 per barrel on May 16. In mid-May, gasoline prices hit multiple all-time highs and the price was $4.62 a gallon on May 31—the day after Memorial Day.

A shortage of refining facilities is pushing U.S. gasoline and diesel prices to record levels. Gasoline prices topped $4 a gallon in all 50 U.S. states in May for the first time, even though global crude oil prices have pulled back from highs reached during the early days of Russia’s invasion of Ukraine. U.S. oil prices are hovering around $115 a barrel, down from over $120 a barrel in March.

Because of the COVID lockdowns and the decreasing demand for petroleum products, some U.S. refineries shuttered and or are converting to biofuels in line with Biden’s preferences and massive subsidies favoring biofuels. The situation could worsen because there are no plans to add significant refining capacity due to the severe regulations governing them. In fact, by the end of 2023, an additional 1.69 million barrels of U.S. refining capacity is expected to close.

Around 3 million barrels a day of global refining capacity have already closed during the COVID pandemic and about 1 million barrels a day of that was in the United States. Besides the closures and retooling to biofuels, some U.S. refineries near the Gulf of Mexico were damaged due to hurricanes last year and some are undergoing maintenance, keeping even more capacity offline. The utilization rate for U.S. refineries is at about 90 percent, at the top of the five-year range. Refinery margins have been pushed to record levels, meaning that the refineries still operating will produce as much as they can.

President Biden needs an education in the oil and gas industry and he should seek out the appropriate expertise if he is at all serious about lowering gasoline prices for the American public. Blaming others will not help Americans struggling with historically high energy prices.

The situation is dire and expectations are that they will get worse. There is insufficient refining capacity to meet gasoline and diesel demand to the point that Biden is considering restarting idle refineries, but that would produce opposite results from what Biden’s goals are with respect to the oil and gas industry and his administration’s assaults against fossil fuels. Americans should expect higher gasoline prices to come if Biden’s current policies continue.