The natural gas industry and the business that render services to the drillers not only provide family-sustaining wages for their employees, they also tend to attract two or more family members who may end up doing the same job or working in related fields. Glen A. Elliott and his son, Glen T. Elliott, were both city transit bus drivers in New York City before being drawn by the gas industry to work in Susquehanna County as water haulers. 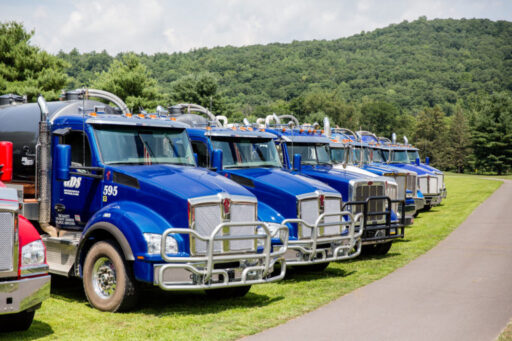 “My son caught wind of it and came here in November of 2018 to get a job,” the senior Glen said of the younger Glen securing a job with GasSearch Drilling Services (GDS). “He thought it was something I might enjoy, so I applied.” Glen A. and his wife, Cindy, also saw it as an opportunity to live closer to her family in New York state’s southern tier. The couple now resides in Binghamton, while their son lives nearby in Conklin.

Needless to say, switching from moving people around an urban environment to driving water trucks in the countryside represented a significant change in lifestyles, but both are happier where they are now. Their incomes are better, and the elder Glen enjoys a sense of freedom that eluded him as a bus driver. He also finds the work more interesting and fulfilling. Despite the routine, Glen is proud of a perfect safety record, for which drivers can receive bonuses quarterly.

GDS’s strong culture of safety is impressive, he maintained. “I’ve never had a job where, when you get to work, they have meetings to remind us again of the safety procedures and what we should be doing.”

Their jobs require a lot of communication, and the younger Glen gained an immediate appreciation for the camaraderie at GDS. “You get to know people because you are around each other all day long, and you make friends,” Glen T. stated.

Despite sharing vocation and employer, father and son do not see much of each except maybe bringing a coffee for each other at a shift change, the younger Glen driving at day and his father hauling water at night. Nonetheless, with so much in common, they easily slip into “shop talk” on the phone. “It definitely makes us closer,” Glen T. remarked.

“Being in the same profession is awesome,” his father offered. They appreciate the one day that they have off together when Cindy sometimes suspends their shop talk and suggests that they find a different subject.

The Elliotts both plan to work to retirement from GDS. 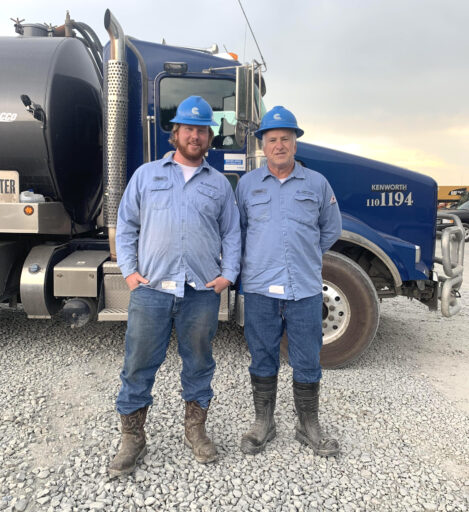