Last year, new offshore wind power capacity in Germany exceeded that of onshore wind capacity for the first time. In 2019, 160 new offshore wind turbines with a combined capacity of 1.1 gigawatts began feeding into the grid. The number of turbines in the German North Sea and Baltic Sea reached nearly 1,500, with installed capacity over 7.5 gigawatts, almost fulfilling the government’s 2020 target ahead of schedule. Generating over 25 terawatt-hours of electricity, offshore turbines contributed about four percent to Germany’s gross power consumption.

The 2019 offshore capacity addition compares to 0.9 gigawatts of new onshore turbines (276 turbines) added in 2019. Thousands of planned onshore wind projects in Germany are currently on hold, due to regulatory conflicts with aviation authorities and protest groups challenging new installations in court. Since 2016, permits for new onshore turbine installations fell by 70 percent. Germans have to date displayed a harsh political reaction to their electricity prices, which are among the highest in Europe and about three times as expensive as U.S. residential rates. 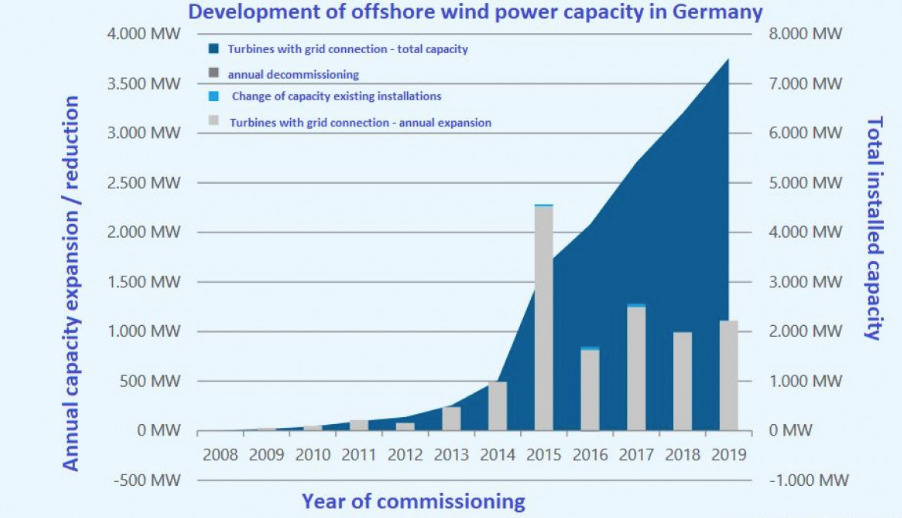 But, the offshore wind industry in Germany is now worried that market rates will be insufficient to cover costs without subsidies. The first time Germany auctioned offshore wind projects, developers were confident that the technology was robust enough to turn a profit without subsidies. Now Germany’s offshore wind developers are asking the government to institute a U.K.-like program that would ensure they get paid enough for their power, no matter what wholesale prices are doing. The U.K. government offers agreements called contracts-for-difference, or CfDs, to promote the technology, which locks in the price of power generated by new projects.

Offshore wind developers want the financial guarantee because they are concerned about the government’s climate policymaking investments in the technology riskier. For instance, developers were surprised at Angela Merkel’s 2018 decision to raise Germany’s 2030 clean power target to 65 percent from 55 percent, which will require more investments in generation, transmission, and storage.

Onshore and offshore wind power installations generated nearly one-quarter of Germany’s total electricity production in 2019, relegating lignite (brown coal) to second place. In 2019, Germany’s offshore wind sector increased its power output by 25 percent. In the next few years, about 9.2 gigawatts of German offshore capacity are expected to be auctioned. The German government announced that it would be increasing the goal for offshore wind in 2030 from 15 to 20 gigawatts capacity in its climate action package. Germany has the potential to build up to 50 gigawatts of offshore wind power, despite its limited coastline. 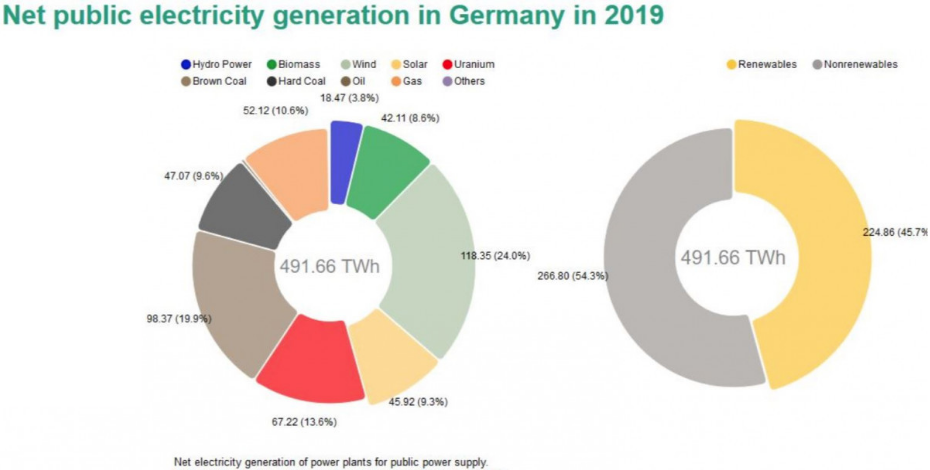 But the country’s onshore wind industry is having major problems and there are fears that it may face the same fate as the country’s solar panel manufacturers. Year-on-year expansion of Germany’s onshore turbine capacity dropped by 80 percent, leading to warnings by industry that a persisting slump would have severe consequences for business and employment, with over a quarter of all wind power jobs at risk.

The problems stem from stalled licensing procedures due to concerns by aviation authorities and other official bodies and because of lawsuits by citizens protesting against construction near their homes and environmental organizations blocking installations due to species conservation. Turbine manufacturer Senvion declared its insolvency in early 2019 and Germany’s market leader Enercon announced it would have to slash thousands of jobs due to declining business.

With Germany’s last nuclear power plant to be shuttered in 2022 and coal power to be phased out no later than 2038, Germany plans to get 65% of its power from wind, solar, and other renewable sources by 2030. Originally, Germany used feed-in tariffs as the mechanism to encourage renewable energy development, which was introduced under the Renewable Energy Act in 2000, and guaranteed for 20 years, but the country changed its approach putting caps on annual expansion, and having power producers compete in auctions for a share of each year’s new capacity.

About 4 gigawatts of capacity will no longer be eligible for renewable feed-in tariff support after next year. Power purchase agreements will be used to keep older turbines operable and are projected to play an increasing role in future renewables deployment. A power purchase agreement is a contract between a power generator and an electricity consumer specifying the terms for the sale of electricity. Other ideas being considered by the government and industry to assuage wind power opponents include improved financial participation by granting residents lower power price tariffs, providing green power directly to local businesses, or paying municipalities a dividend of the profits generated with the turbines.

Wind power became Germany’s single most important power source in 2019. Nevertheless, expansion numbers of onshore wind have collapsed due to regulatory issues and lawsuits by citizens and environmental organizations. While turbine manufacturers worry that more jobs will be lost and Germany’s renewable power targets missed due to lacking onshore expansion, offshore wind power is establishing itself as a cornerstone of the country’s future energy supply.

But, developers of offshore wind power want to be assured by the government that they face no (or little) financial risk. Clearly, Germany is breaking new ground given its already high electricity prices and its plans to drastically increase renewable energy for its electricity needs. Policymakers should keep a close eye on what develops out of Germany’s experiment with “green power.”